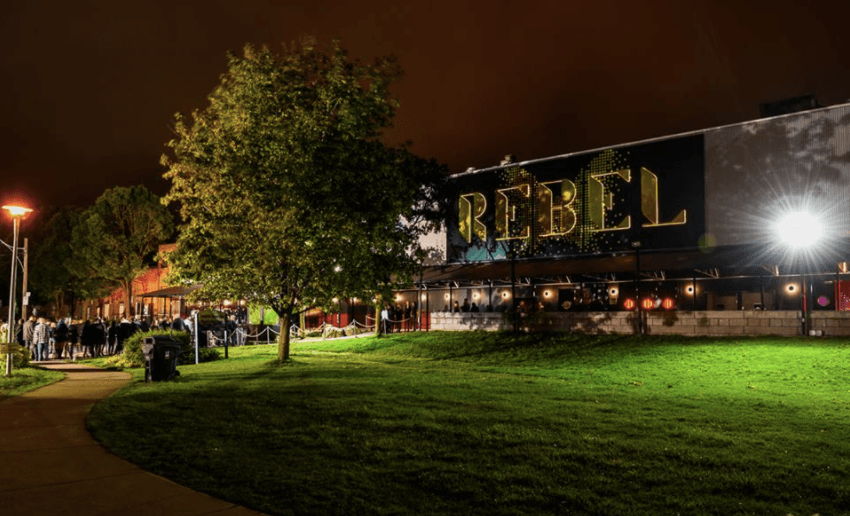 The former Docks Nightclub in Toronto is back in the spotlight.

The space, located at 11 Polson Street and home to Rebel and Cabana Pool Bar, is the subject of an upcoming hearing of Licence Appeal Tribunal (LAT) on February 9.

In the summer of 2015, the City of Toronto objected to a new Liquor Licence Application put forward by Powerhouse Corporation.

According to Ray Kahnert, Senior Advisor, Communications at the Alcohol and Gaming Commission of Ontario (AGCO), the proposed capacities are based on the maximum allowed by City building and fire compliance letters.

Since this case is before the LAT, he could not provide any additional comments.

But while the application outlines these number, a lawyer representing the applicant said that this is not the case.

“Powerhouse Corporation has applied for a liquor licence for premises now operating as Rebel and Cabana Pool Bar. Powerhouse has asked people objecting to the liquor licence to discuss with the applicant how to resolve some issues regarding the application. One of these issues is the capacity,” said Richard Kulis, of Vassos Law, in email to Daily Hive.

“Powerhouse has no intention to operate a business with a capacity of 15,000. The applicant hopes to negotiate a reasonable maximum capacity that would closely approximate the existing licence capacities.”

The property at 11 Polson has had a long history of licensing issues. From 1996 to 2006, the premises was occupied by The Docks, which at the time was a popular Toronto night club. In 2006, after a hearing at the AGCO, its liquor licence was revoked. At the time, it was determined by the AGCO that “it was not in the public interest having regards to the needs and wishes of the residents for the Docks to retain its liquor licence.” Part of the issue was repeated noise complaints in the neighbourhood due to both indoor and outdoor events.

In 2007, Polson Pier applied for a new liquor licence at the location, which was approved after the City reached a settlement on conditions that were placed on the licence. Seven years later, Polson Pier tried to amend conditions on their licence, which was objected by the City.

And when the initial application by Powerhouse was submitted in 2015 for a new licence at the premises, it was also refused by the City.

“Without several of the conditions currently attached to the licence, the noise impacts on the island residents that led to the revocation of the liquor licence in 2006 may return. Therefore, it is not in the public interest having regard to the needs and wishes of the residents to have a new liquor licence issued for the Premises,” stated a City Council report in the summer of 2015.

With the hearing scheduled on February 9, it is unclear what is planned by Powerhouse past that date.

“Powerhouse is concentrating on obtaining a liquor licence. Once that matter has clarified Powerhouse will determine its next steps,” said Kulis.