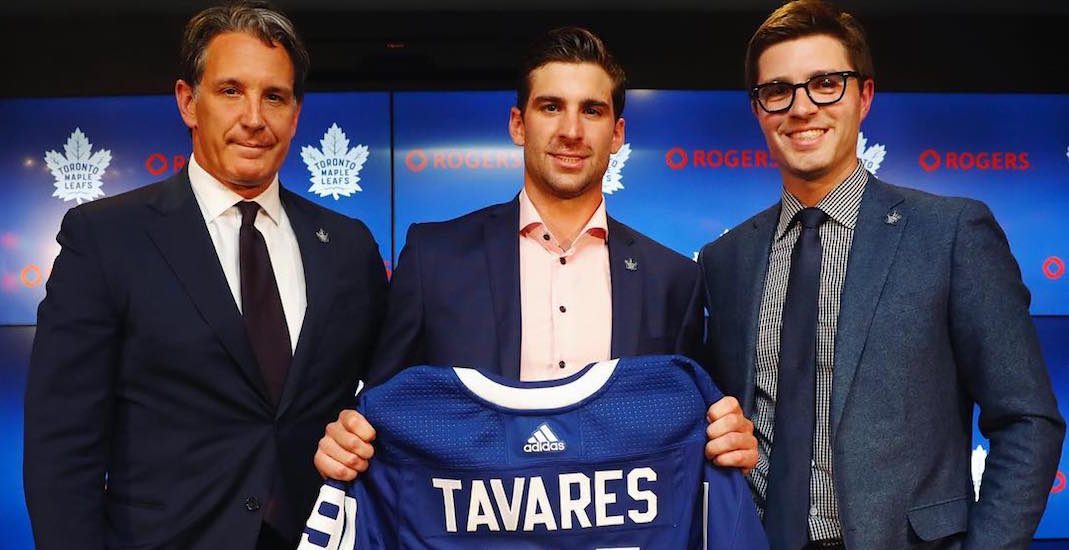 Anytime you’re able to pry a franchise centre in his prime out of unrestricted free-agency, you know you’ve won the offseason.

The Toronto Maple Leafs did precisely that and more this summer in an attempt to establish themselves as bonafide Stanley Cup contenders.

It remains to be seen if the moves will actually pan out in the form of a fruitful playoff run, though in the interim it’d be a good idea to meet the new players poised to help the Leafs over the hump.

What more can be said about John Tavares that hasn’t already been said?

Since the 2012-13 season, Tavares has racked up 351 points in 364 games – good for fifth best in the NHL through the lens of raw points during that span.

Chart and data via Corsica.hockey

That he’s managed this without the aid of an elite winger on his line is all the more impressive.

Of course, the last part’s bound to change as Tavares will have a dynamic playmaker in Mitch Marner on his right wing.

With a centre core of Auston Matthews, John Tavares, and Nazem Kadri, opposing teams are going to be in for a nightmare matching lines and defence pairs.

Par Lindholm here making his debut at #Leafs summer skates. Putting in extra work after the group portion with Barb Underhill and the ever-popular sled. pic.twitter.com/s98lUaET4A

Brought in to compete for a depth role, 26-year-old Par Lindholm has shown his high-end hockey sense and defensive ability to carve a spot on the opening night roster with conviction.

In previous years, the fourth line centre role has featured a rotating cast of players that just haven’t quite fit in.

Lindholm’s 47 points in 49 Swedish Hockey League games suggest he’s a bit different from those players in that he has an offensive element to his game through his strong vision and odd flashes of skill.

The cap-strapped Leafs will be hoping Lindholm’s the long-term answer in that depth centre capacity as he’s being paid just $925,000 for three years on his entry-level contract.

Leafs lead 5-2 with 7:40 remaining in the third. #TMLtalk pic.twitter.com/WSMWRvLfZh

It’s a shame how detrimental injuries can be to a player’s career.

Tyler Ennis is one of the latest victims – scoring just 46 points in his last three injury-riddled seasons combined after registering the same amount in the 2014-15 season alone.

The underwhelming production led the Minnesota Wild to cut ties with Ennis and his $4.65 million cap hit through a buyout this summer.

In Toronto, Ennis has a prime opportunity to skate on a line with Auston Matthews given that William Nylander remains unsigned. There’s no better opportunity a player looking to rejuvenate his career could ask for.

It’s no secret that the Leafs needed help on the right defence this season.

Between Ron Hainsey, Nikita Zaitsev, and Roman Polak, the right side was routinely exposed while moving the puck and defending against speed last season.

While Hainsey and Zaitsev appear destined to return to their usual spots on the blueline, newcomer Igor Ozhiganov is looking to fill the third pairing void left by Polak.

Ozhiganov’s nine points in 46 KHL contests tell us he doesn’t have much to offer offensively, but where he presents a possible improvement is from his own zone-out.

The 25-year-old defenceman is mobile despite his 6-foot-2 frame and offers competent puck-moving skills in addition to the strength to effectively battle against forwards below the hash marks.

Ozhiganov’s decision making has been touted as the pitfall in his game, but if he can cut down on the turnovers and mental lapses there’s no doubt that he’ll be an upgrade on the third pairing.