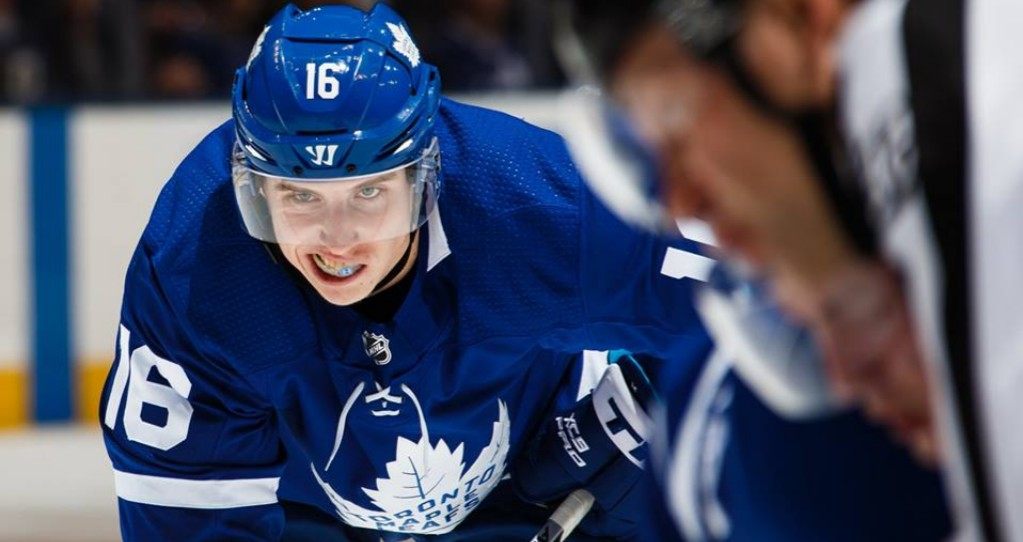 As soon as John Tavares decided to sign with the Toronto Maple Leafs back on July 1, heightened expectations quickly followed. There’s no need to remind anyone how long it’s been since this club last raised the Stanley Cup – for the majority of us, that feat predates us by a decade or three.

But as a new season opens, there’s a groundswell of excitement in Toronto and across Canada, with whispers of hockey’s greatest glory gradually shifting to bombastic claims that it’s the Maple Leafs’ time, finally.

Here, then, are five Maple Leafs predictions for 2018-19, a season where everything might change. 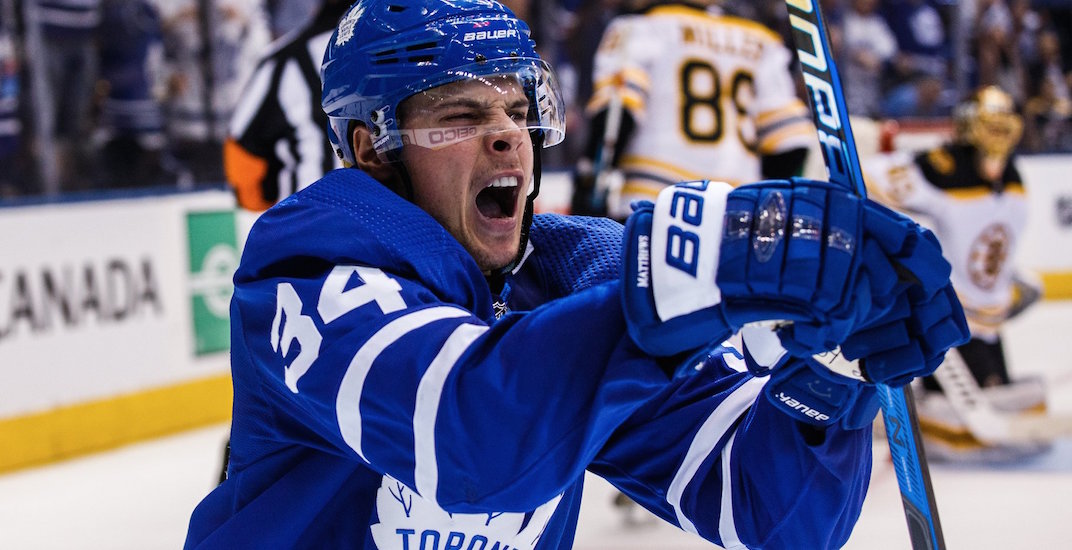 Over the past five NHL seasons, only one player has scored 50 or more goals in a single campaign, and his name is Alex Ovechkin. The newly crowned Stanley Cup champion reached that mark three times, with a 49-goal season also to his name in that span.

Auston Matthews recorded 40 goals as a rookie two seasons ago, then scored 34 goals in 62 games in an injury-interrupted sophomore campaign. That put him on pace to score 45 goals over the course of a full 82 games.

Back to full health and as a featured player in a stacked lineup, he’ll benefit at times from being drawn away from the heaviest of defensive competition, and it’s well within the realm of possibility for Matthews to hit the half-century mark in the final year of his entry-level deal.

Matthews, by the way, was the quickest to reach 50 career goals (96 games) since Ovechkin.

Here’s what I’m picturing at the end of October: parents and children alike walking the streets wrapped in Toronto hockey bed sheets, with some serious bedhead and a little drool coming out of the corners of their mouths.

This Halloween, the hottest costume will be a walking Tavares ‘Why I Joined The Maple Leafs’ announcement tweet.

Not everyday you can live a childhood dream pic.twitter.com/YUTKdfMALl

It’s going to sweep the nation this Oct. 31. Trust me. 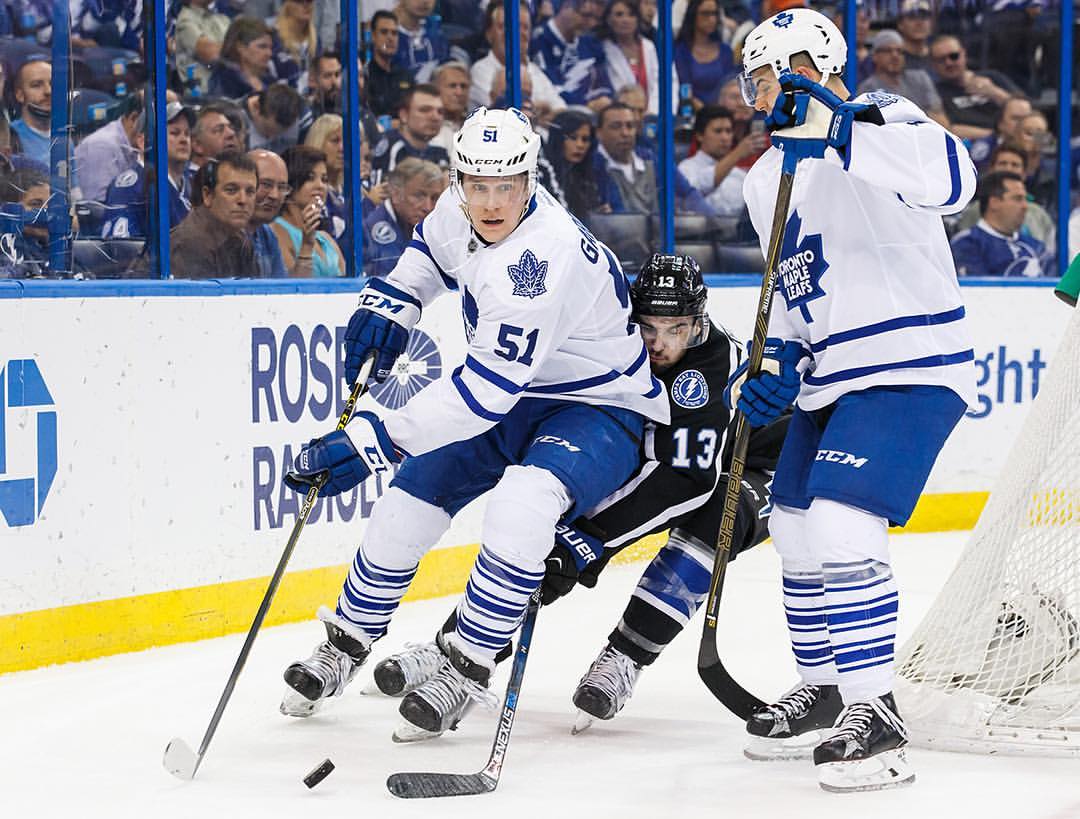 We all know the Maple Leafs are absolutely loaded up front, but any talk of Cup contention must be tempered by some serious questions on defence. Here’s a look at Toronto’s projected opening night defence corps:

Even to the greatest of optimists, that blue line isn’t screaming Stanley.

Unless someone steps up in a big way at both ends of the ice, this team will remain in dire need of a bona fide No. 1 player at this position, and he’ll likely need to come via trade, as much as fans bemoan the idea of dealing away a quality forward.

There’s much to like about this roster as it stands, and it will be an exciting bunch to watch night in a night out. There will more than likely be a bit too much excitement in their own end, however, and Frederik Andersen could very well see the most shots against out of any of his peers for the third season in a row.

I don’t know when, I don’t know how, but Gritty will destroy the Maple Leafs’ mascot at some point this season.

How do I know this?

Quite simply because Carlton looks like he was designed at Build-A-Bear by my three-year-old son, and the new face of the Philadelphia Flyers looks like Animal the Muppet after being diagnosed with rabies. And if Michael Scott taught us anything, it’s “rabies wins.”

My advice to Carlton is maybe skip All-Star weekend in San Jose.

First, let’s be perfectly honest: the NHL’s current playoff system stinks. The Maple Leafs finished last season with a record of 49-26-7, good for 105 points and new franchise highs in both wins and points. But for all their success, they were rewarded with a first-round playoff series against the Boston Bruins, a 112-point club.

The end result wasn’t quite as dramatic as 2013, but Toronto was once again denied a series win at TD Garden, remaining one of three teams yet to advance to the second round since the 2004-05 lockout, the other two being Columbus and Florida.

But there’s some good news heading into 2018-19. Those same Bruins that squeaked out a series win only to lose to the Lightning in five games in the next round did not improve over the summer, while the Maple Leafs added the best free agent since Boston signed Zdeno Chara in the form of Tavares.

The consensus seems to be that Toronto and Tampa Bay will duke it out for first place in the Atlantic, and while the winner will draw a wild card team or, more likely, the fourth-ranked club in the division – likely the Florida Panthers, but maybe the Buffalo Sabres – the second-place squad will face a more beatable Bruins team this time around.

All bets are off in the likely event it comes down to the Leafs and Lightning in the second round, as Tampa Bay has been a popular Cup pick for a few years running. These two teams are in a class of their own, and the rest of the Atlantic foes shouldn’t be much of an issue, on paper at least.

A lot can and will change between now and the playoffs, but anything less than at least one playoff series win for Toronto will be seen as a massive disappointment.