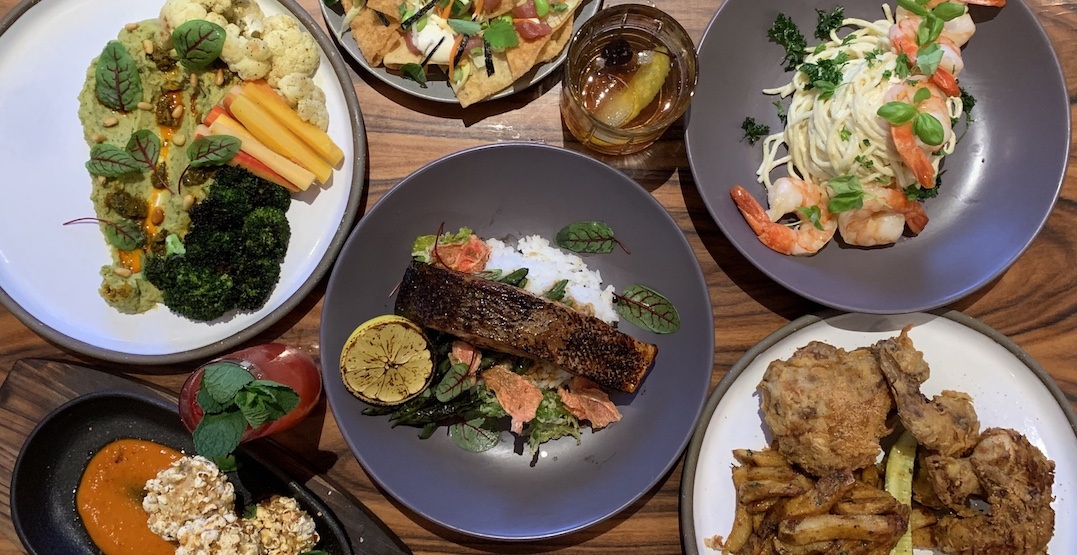 Real Sports has long been the place to grab wings, nachos, and poutine pre- or post-game in Toronto.

And while the comfy, sports-forward vibe of the space has served the community well, change is life’s only constant.

The eatery, located at 15 York Street and adjacent to the Scotiabank Arena, has leaned into this universal truth.

And the results are a major win. 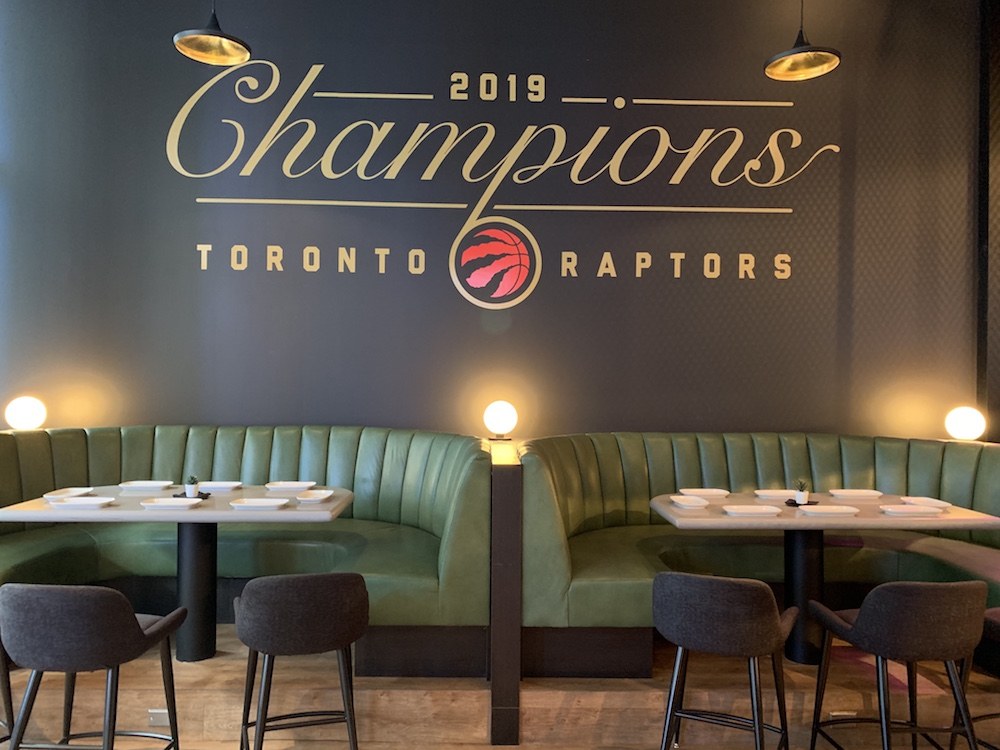 No longer Real Sports, the restaurant is now titled RS.  And when you enter the re-vamped space, the first thing your eyes see is a reminder of the Toronto Raptors’ Championship win.

If that doesn’t work up your appetite for good food and good spectating, we don’t know what else will. 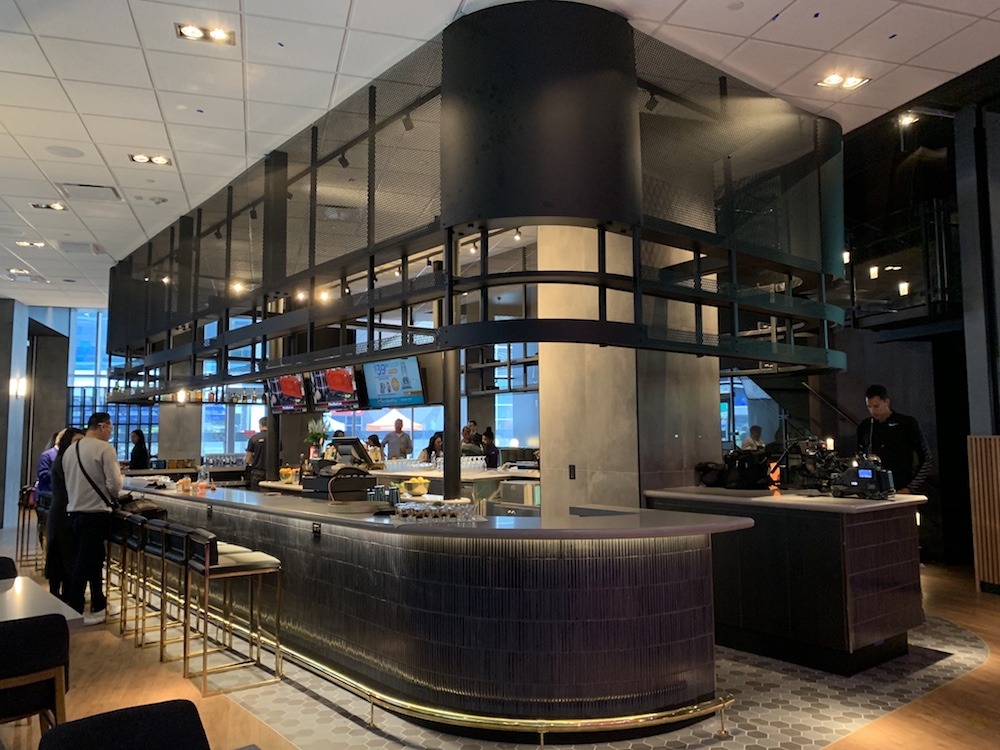 The whole front space of the eatery has been converted into what’s called the “Resto.” Defined as “a warm and inviting space,” this section offers less of a sports bar-vibe, and more of a classic restaurant feel.

With large tables, cozy booths, and a large, central bar with plenty of seating, it’s a great spot to tuck into for lunch or dinner. 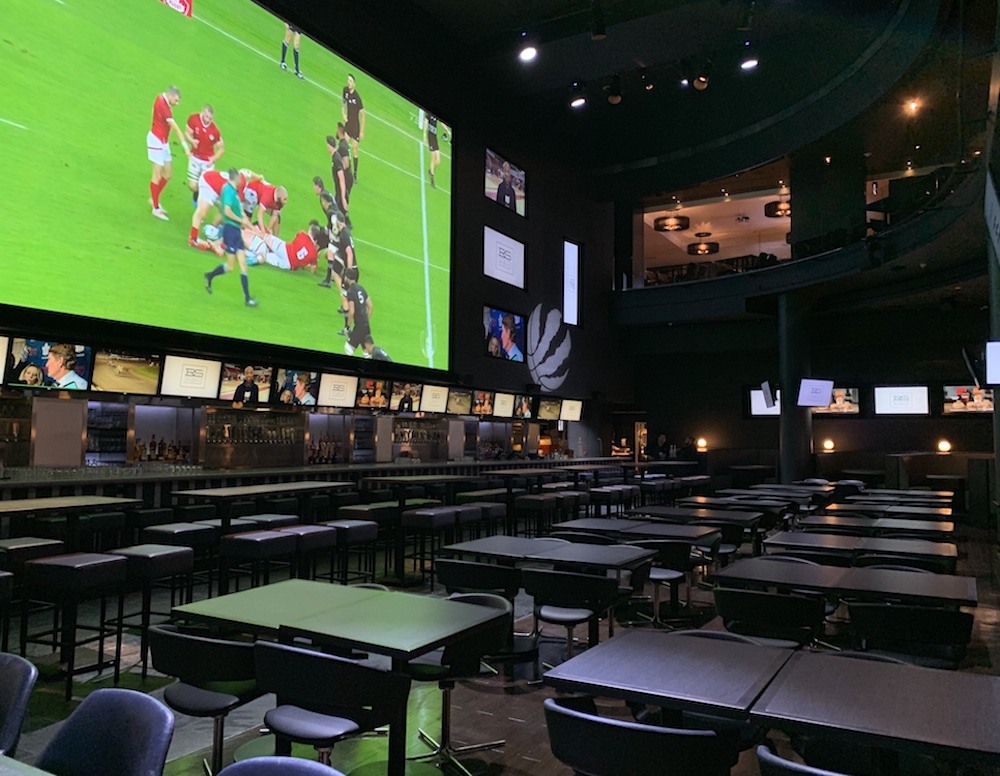 And tucked behind Resto is the perfect place to watch the game.

“Arena” is the main bar space at RS, where the booths and tables have been organized so that everyone in the room has a solid view of the 36-foot screen hanging above.

Through the renovations, the screen has been enhanced from 9,000 to 46,000 lumens, which means a much clearer and more defined viewing experience. 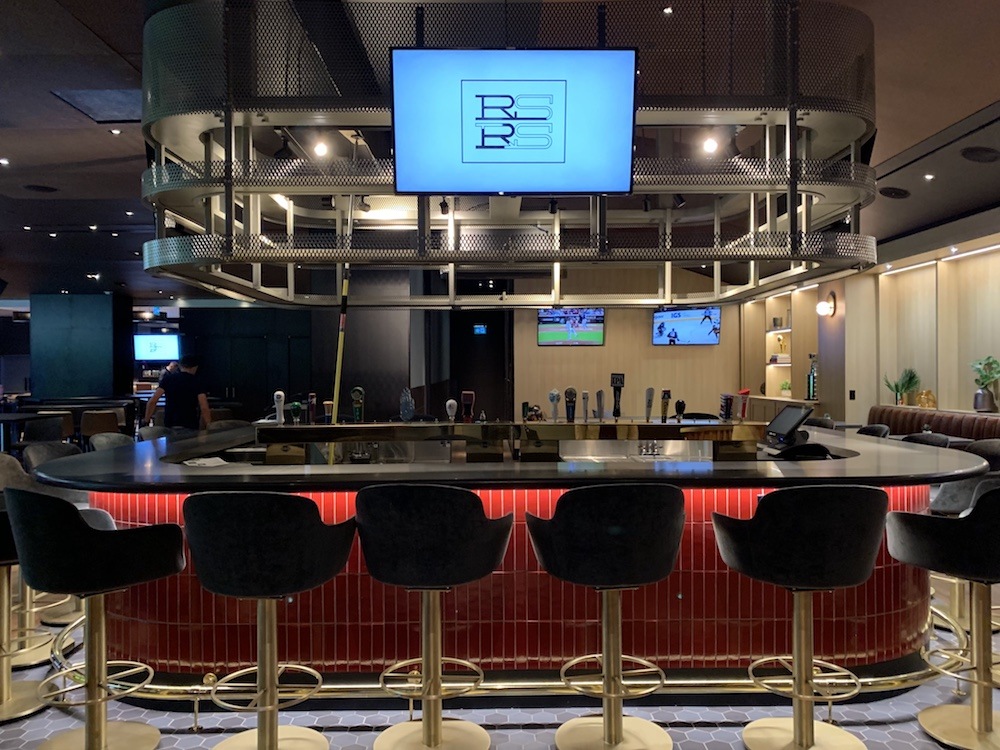 And if you prefer to aim high in life, head upstairs.

The eatery’s upper level features another bar equipped with smaller TVs overhead, while the large screen below is still visible from the balcony. 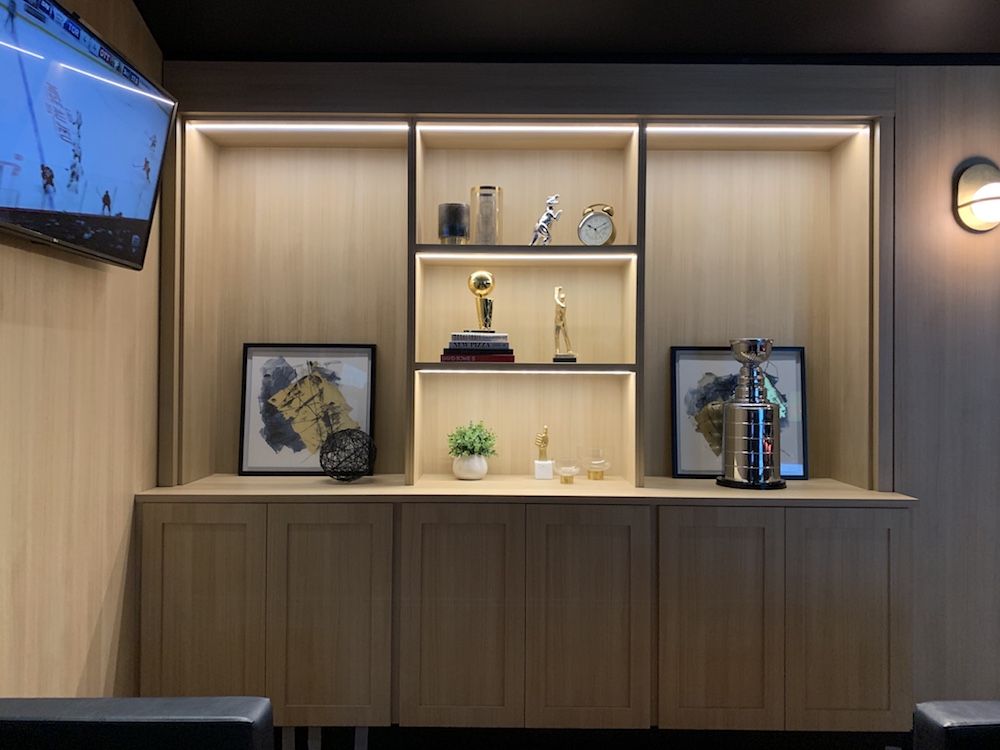 Surrounding the upstairs bar is shelving that showcases sports memorabilia from the home teams — a nod to the successes of those on the rink and on the court.

The upstairs space is entirely open to the Arena below, offering a full view of the massive screen and the rest of the restaurant’s happenings. 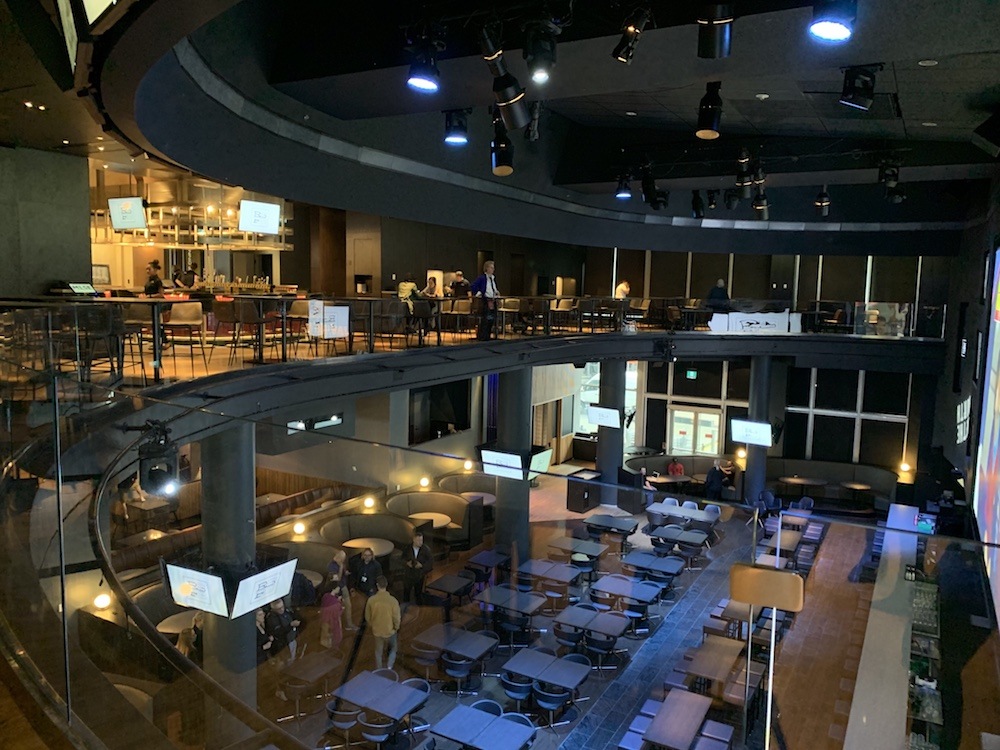 So if you want to be a part of the game-watching experience, but you’re not huge on being in the middle of the crowd, upstairs offers a chance to watch from a little further back.

But whether you like to be in the thick of it or enjoy the party from the sidelines, you’re going to want some fierce eats.

And the revamped menu at RS is offering exactly the fix. 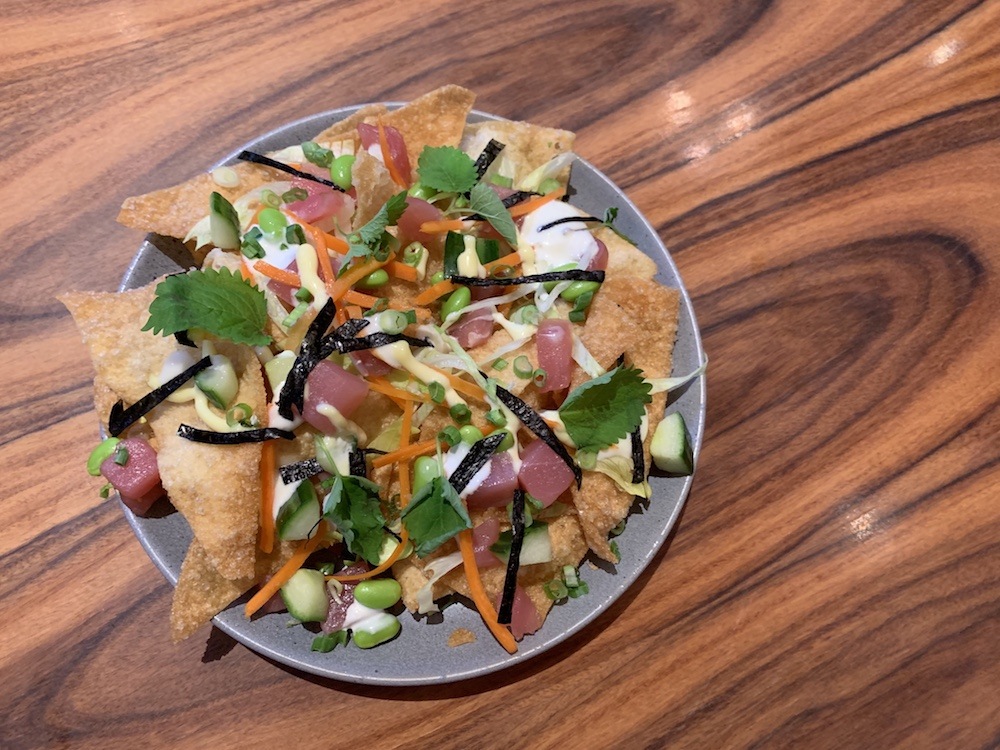 Share-plates are aplenty, with a nacho take on a poke bowl offering fresh flavours to a dish that can often be quite heavy. 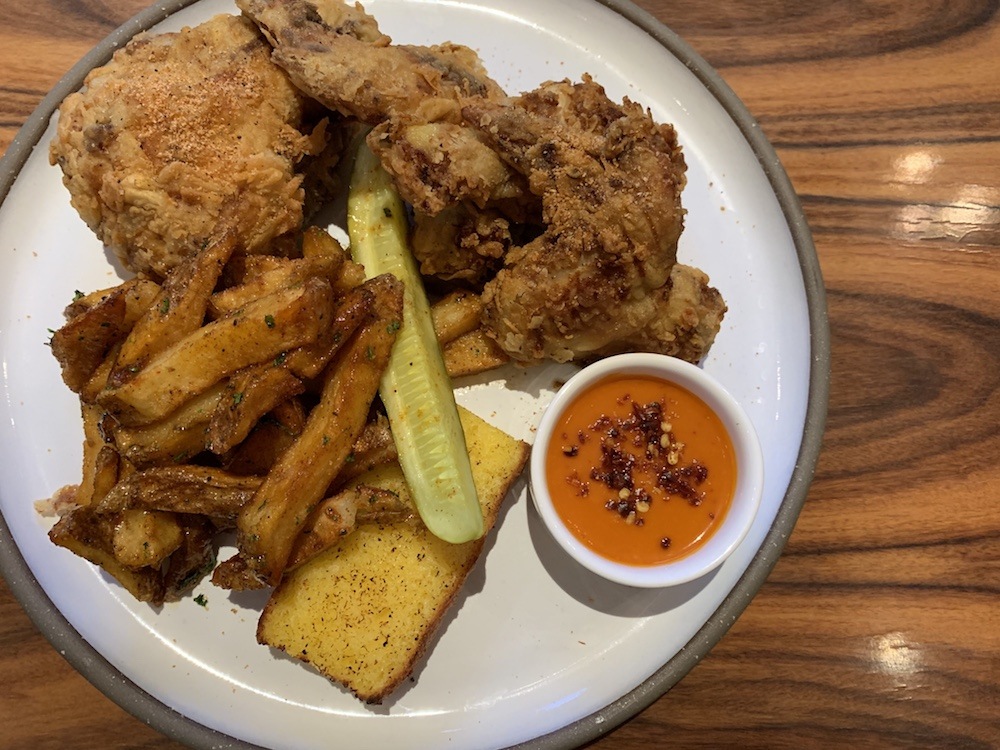 But heavy is also encouraged. Which is where the smoked-then-fried chicken comes into play. This crispy goodness is the result of a three-day process including a 24-hour brine, a slow smoke, a buttermilk marinade, and a good ol’ deep fry.

Served with pickles, fries, and hot sauce, it’s the ideal way to get some southern comfort into your day. 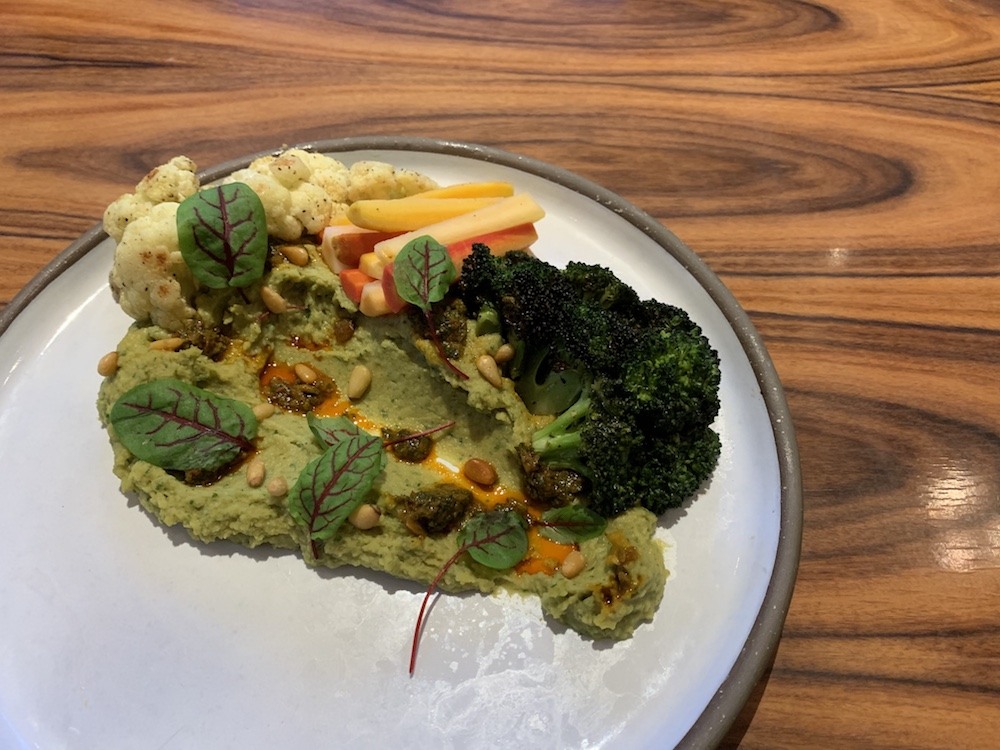 For a lighter fare that’s veg-forward, the avocado hummus is a green delight. Grilled and chilled crudité is served with the savoury spread, and topped with a popping pesto.

It’s the anti-salad of salads, if you will. 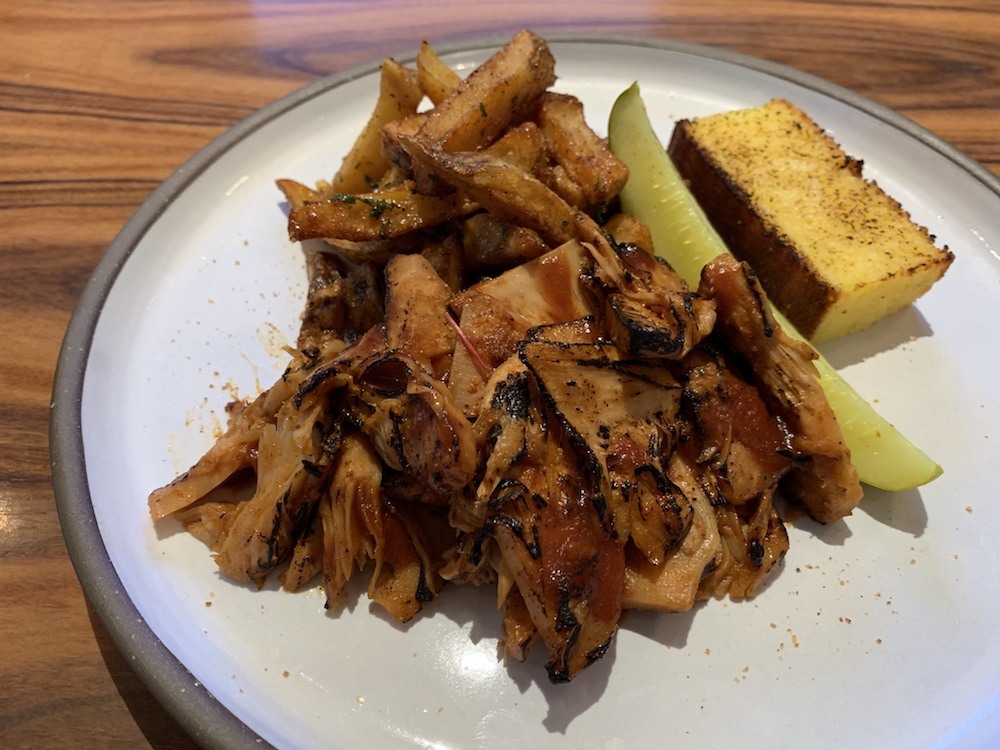 Further veggie-focused options include a pulled jackfruit dish, paired with a spicy and savoury BBQ sauce.

Culinary Director chef Chris Zielinski and executive chef Matthew Sullivan say that though this dish doesn’t feature meat, it gets just as much care and attention as the smoked-then-fried chicken does. 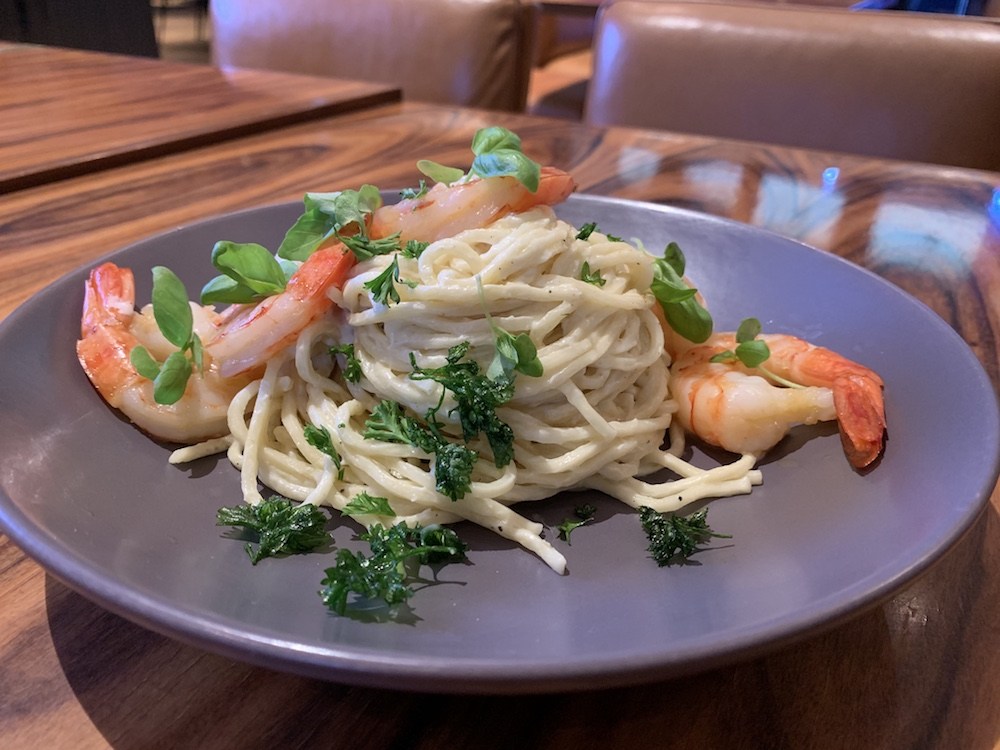 Pasta fans have a place in the crowd too, and the shrimp scampi, made with spaghetti, roasted shrimp, and lemon-garlic cream sauce speaks directly to those noodle lovers. 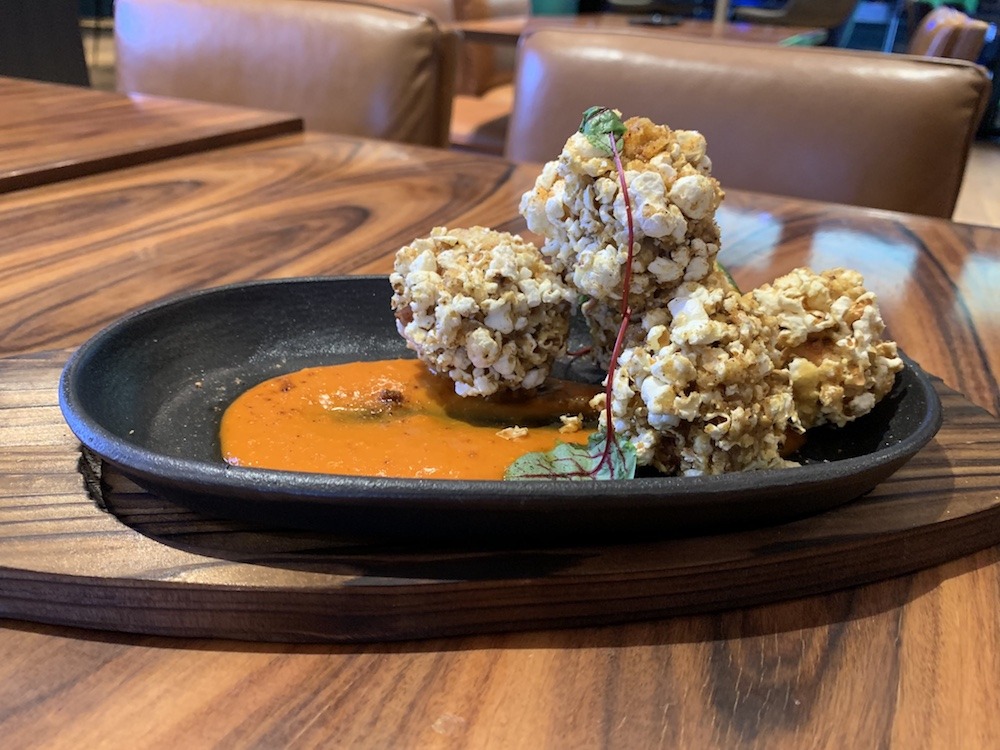 For those looking to fuse a little extra fun into their meal, the popcorn chicken isn’t exactly what you’d expect when you hear the name.

Instead of the popcorn-sized bites that fast food joints serve up, this spot is levelling up the dish with smoked and brined chicken that’s rolled in popcorn tempura. 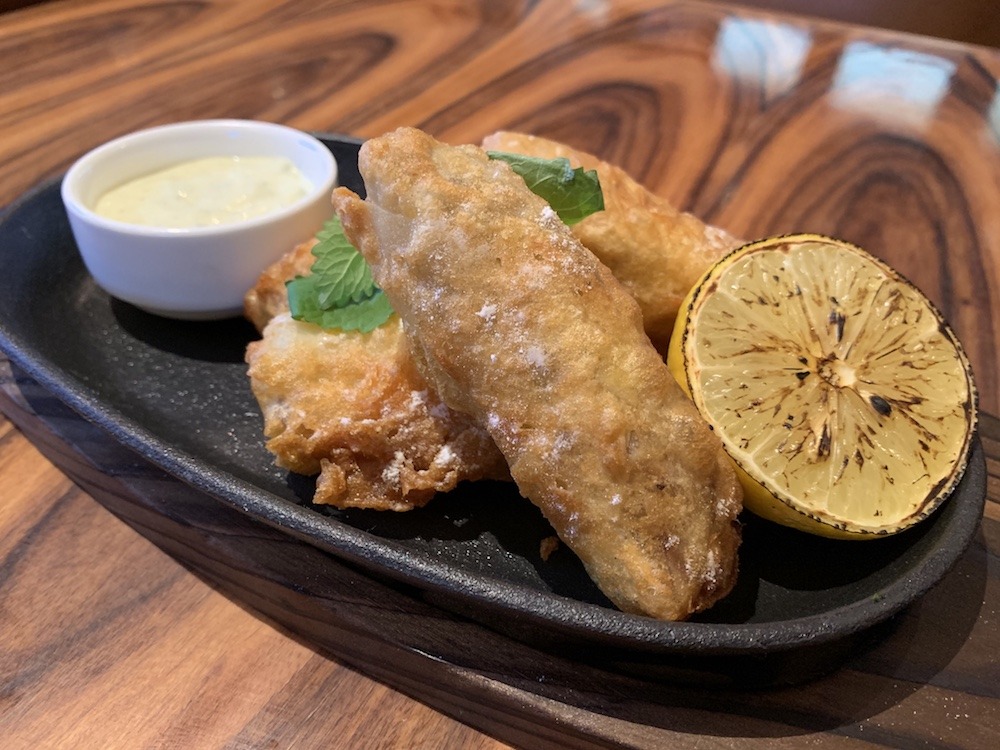 And to keep things playful, the spot is serving up fish n’ chips in a way you’re sure to have never tried before.

That is: in spring roll form.

Fogo Island cod is rolled into a roll with fresh-cut fries, misted with malt vinegar, and served with tartar sauce to dip. Trust us… this one’s a game changer. 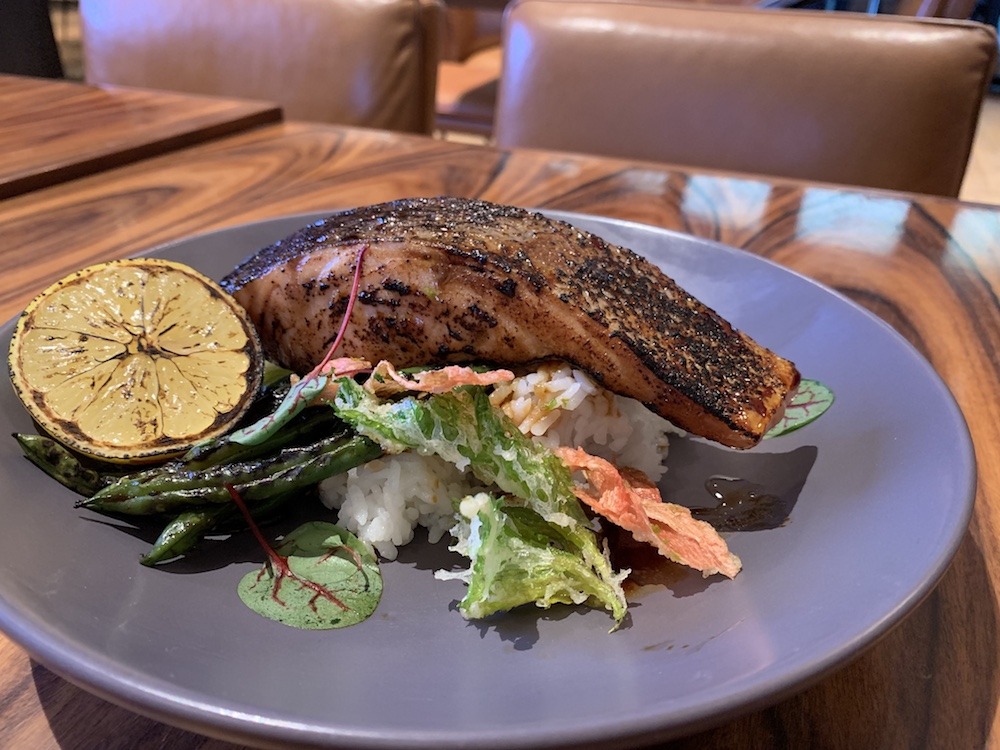 Rounding out the menu with something sophisticated and fresh, the Japanese-style miso salmon offers all the makings of a well-balanced meal. 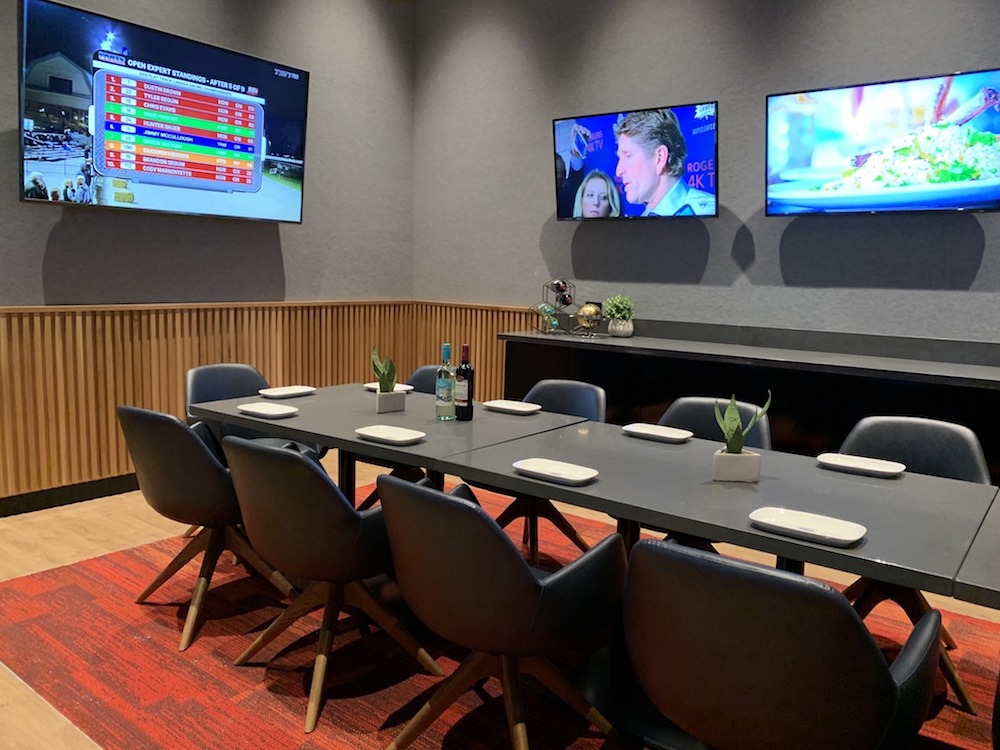 The eatery is set to celebrate its grand opening on October 23, and from then, you’ll be able to dine on the fly, settle in for the big game, or book out one of the spot’s private rooms for your meeting or party.

No matter what your reason for stopping by, at this upgraded spot, you’re winning. 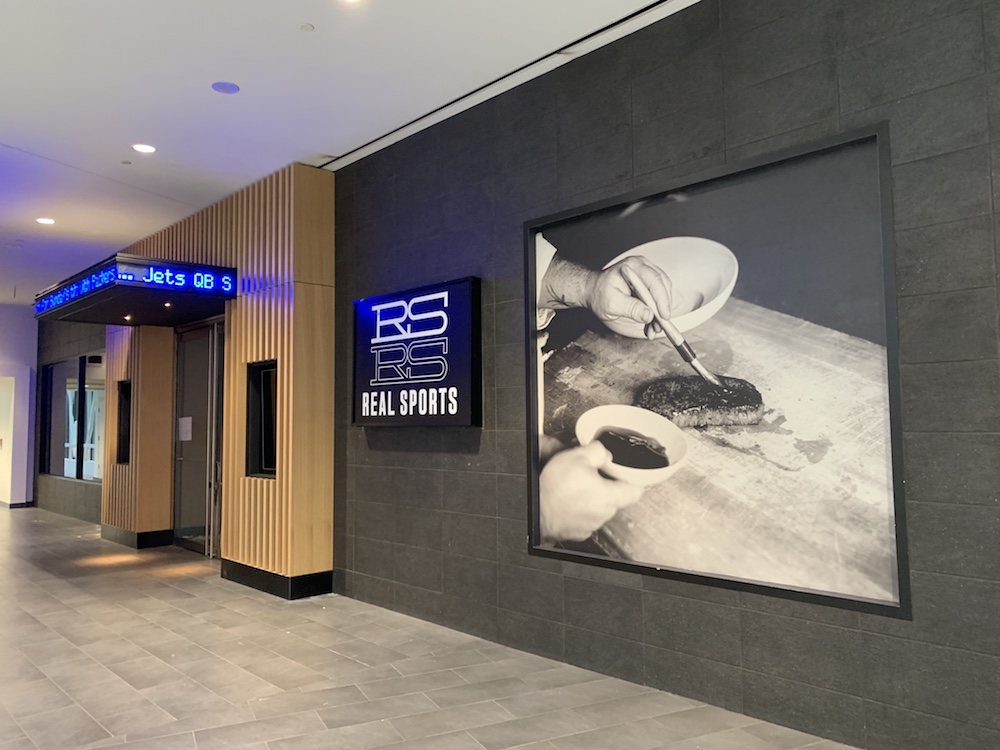