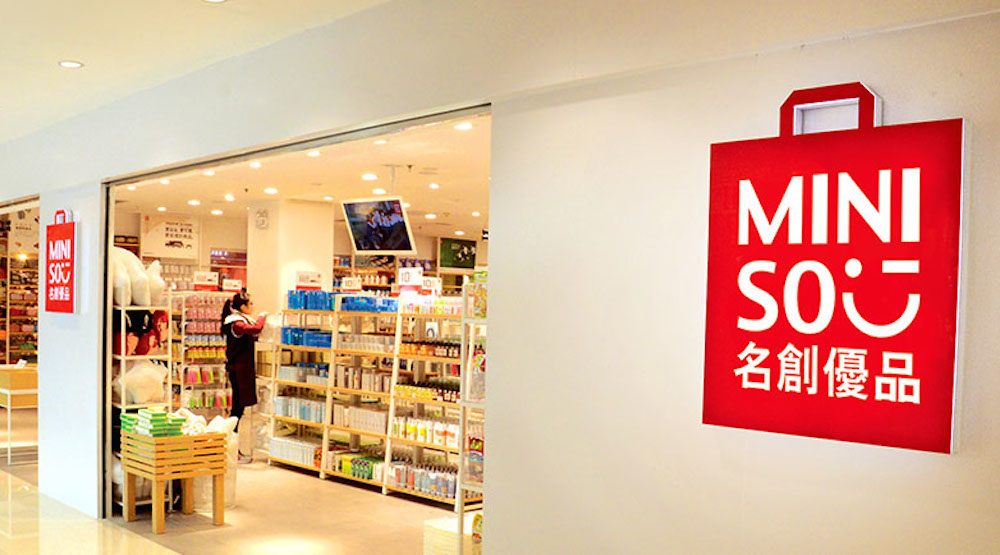 Exterior of a Minisio storefront in a shopping centre. (Miniso)

One of the world’s fastest growing retailers is planning a major penetration into the Canadian retail landscape by opening up to 500 stores within the next few years.

Chinese dollar store giant MINISO will be ramping up its expansion plans in Canada, according to Retail Insider. With both Chinese and Japanese co-founders, the company is known for selling Japanese-designed household and consumer goods, such as cosmetics, stationary, toys, and kitchenware.

The company opened its first Canadian location in Vancouver at 1256 West Broadway earlier this year, and it plans to open three more locations in Metro Vancouver over the coming weeks and months.

Canada’s second MINISO will open at Tsawwassen Mills next week while additional locations at West Vancouver’s Park Royal shopping centre and 550 Granville Street in downtown Vancouver will open in July.

Expansion to Toronto and Montreal

After its first wave of expansion in Vancouver, MINISO will open locations in Toronto and Montreal and will continue its Canadian expansion at a rate of dozens of new stores each year, with as many as 50 stores over the coming 12 months. It is strategically choosing a franchise model to allow for its rapid growth.

With stores generally no larger than 2,000 square feet, MINISO stores are significantly smaller than those of Japanese dollar store Daiso, which opened its first and only Canadian location in Metro Vancouver’s Aberdeen Centre in 2003 – a two-level, 26,000-square-foot store.

If MINISO moves forward with its ambitious Canadian expansion plans, it could disrupt the nation’s ultra low-cost retailer market dominated by Dollarama, which announced its plans earlier this spring to grow from 1,100 stores to 1,700 stores over the next several years.

MINISO was founded in 2011 in Mainland China and has quickly grown to 1,800 locations across Asia. It has similar expansion plan for Australia, where it plans to open 300 stores over the next three years. Across the world, the chain aims to grow to 6,000 stores.