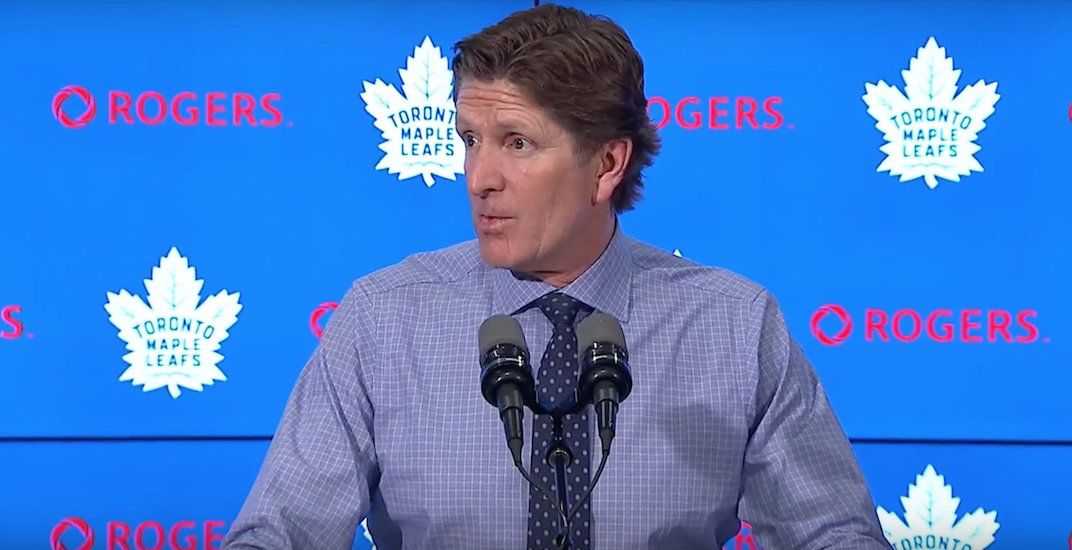 There are many reasons why the Toronto Maple Leafs were, once again, victim of a Game 7 loss in Boston in the first round for the third time in seven seasons.

One of them was head coach Mike Babcock.

With a chance to close out the series on home ice on Sunday, the Leafs lost 4-2 in Game 6 and followed it up Tuesday night with a crushing 5-1 defeat. Two empty net goals by Boston skewed the scoreline a little and Toronto had every chance to make things closer, but it nevertheless was a familiar result for Leafs fans.

Fingers began to be pointed at what the reason for yet another disappointing season finale was. And many of them were pointed at the NHL’s highest paid coach at $6.25 million a season, Leafs bench boss Babcock. A revered figure around the league, Babcock exudes a persona of competitive spirit, experience, and respect.

But looking at his recent NHL performance? He’s been bounced in the first round in his last five playoff appearances (three with Toronto, two with Detroit).

And Tuesday night was, well, a disaster in terms of game management. 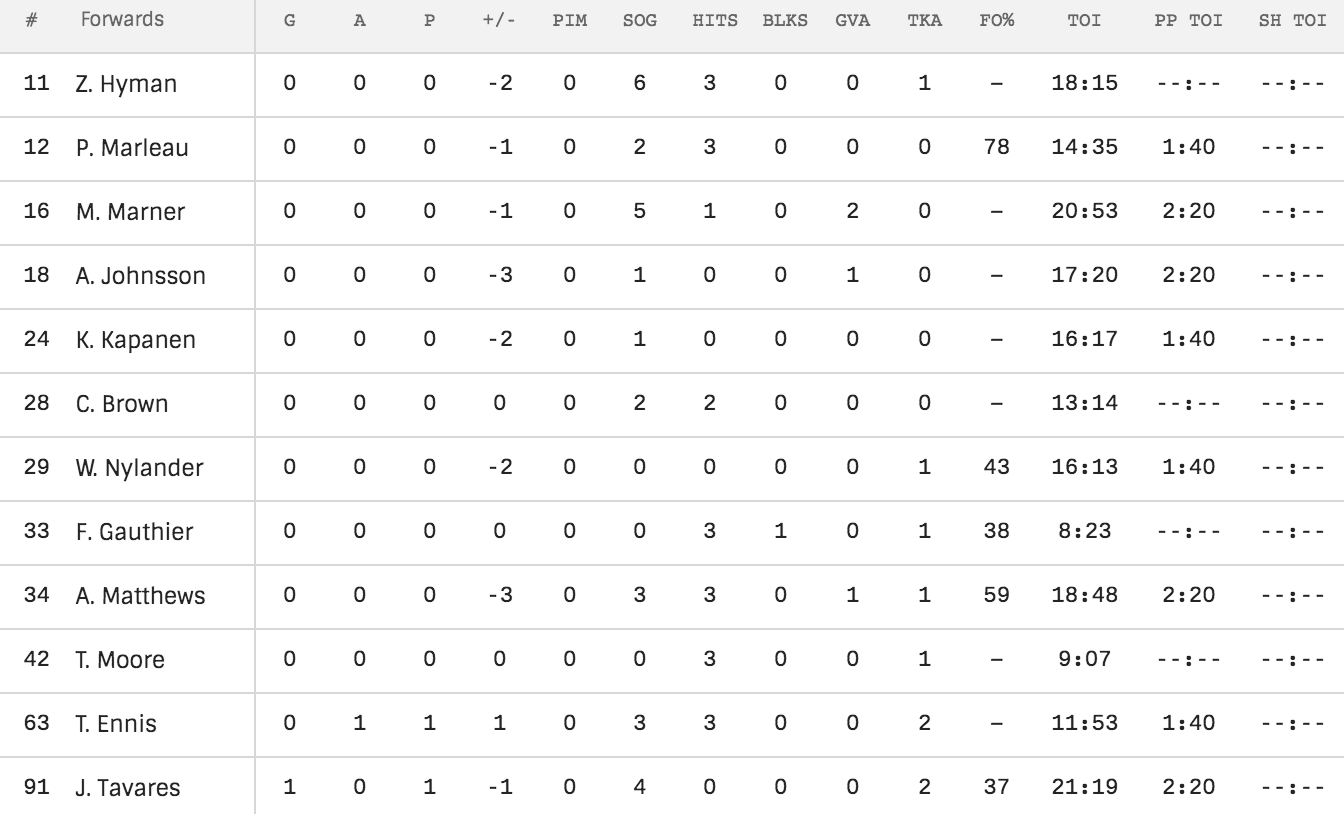 Auston Matthews, who had scored five of the team’s 17 goals in the series, played just 18:48. In an elimination playoff game, where you can load up your lines and run your best players, there really isn’t much of an excuse to not play an elite player as much as possible.

For example, a look at Sidney Crosby’s playoff gamelog sees Pittsburgh’s top centre usually only drop below the 20-minute mark in wins, i.e. games where it makes sense to rest your stars.

Like the Leafs, the San Jose Sharks were trailing for much of Game 7 in their series last night also. Their top centre, Tomas Hertl, played 23:37 in regulation time.

When Toronto needed two goals to get back into the game down 3-1 in the third, the Leafs’ fourth line of Trevor Moore, Tyler Ennis, and Frederik Gauthier (combined one goal in the series and 17 on the season) were receiving regular shifts.

To top it all off, 39-year-old winger Patrick Marleau remained a staple of Babcock’s rotation in both power play and extra attacker situations.

Babcock on Marleau being on the ice with the goalie out: "We felt Pat should be out there."

Marleau played 14:35 overall in Game 7, which is about what you’d expect from a third-line forward, but it was Game 6 where his most confusing usage came. Marleau played 17:06 in that matchup, including 3:07 on the power play, which was more than John Tavares (2:38) and Mitch Marner (2:47) received. While 20 or 30 seconds may not seem like much time at all, it’s showing a clear over-reliance on the wrong veteran players, a problem that has loomed around Babcock wherever he’s coached.

Many fans and media are calling for him to be fired:

Brown got more ice time in game 7 then Matthews. Mike Babcock needs to be fired. Tomorrow.

Mike Babcock has been outcoached all year. What an embarrassment. Terrible effort from an unmotivated team. #LeafsForever

I’m way too fired up I need to step away from social media my god I am furious we should have won that series. 3 years in a row babcock tick tock your time is up #LeafsForever forever never winning a cup FK SAKES

I stood up for Babcock all year, but this playoffs has been a true coaching fucking joke. Fire the stupid fuck please #LeafsForever

Babcock has now been the Leafs’ coach for four seasons. His first year, 2015-16, was a wash. The team was intentionally bad to tank for a draft pick and filled with the strangest mix of players you ever saw. They finished last in the NHL with 69 points, won the draft lottery and drafted Auston Matthews.

In 2016-17, a team featuring rookies such as Matthews, Marner, and William Nylander grinded out an impressive 95-point campaign before taking the Presidents’ Trophy winning Washington Capitals to overtime three times in an incredibly fun six-game series.

In 2017-18, the team had their best-ever regular season, picking up 105 points… and still finished third in a tough Atlantic Division. As you likely know, they bowed out in seven games to Boston in the first round. This year’s 100-point team, featuring key acquisitions in Tavares and defenceman Jake Muzzin suffered the same fate, albeit down a markedly different path.

Simply put? It hasn’t been a good enough. Four years (three with a competitive roster), and a combined eight playoff wins for the NHL’s highest paid coach.

And that’s not to say it was a wrong call by team president Brendan Shanahan in bringing him in. Babcock was the one to hire when the Leafs had a coaching vacancy. He was a champion at the Olympic, World Junior, Canadian University, and of course, NHL levels. Courted by several teams, few coaches put together a resume like he did. Just a year after being hired by the Leafs, he won yet another championship, leading Canada to the World Cup of Hockey title on home ice in Toronto.

And after a disappointing series last year, Babcock had a chance at redemption. Two, actually. Win Game 6 on home ice, or win Game 7 on the road in Boston. He failed both tests, and the Leafs lost twice. The Leafs are 2-3 in elimination games under Babcock, and 0-3 at chances to win the series over the past two years.

There were other issues, of course.

Defenceman Jake Gardiner (who had played a mostly excellent series to that point) made a bad play at a terrible time leading to the game-winning goal.

Nazem Kadri, whether you think his series-long suspension was warranted or not, removed himself from the lineup for a second consecutive postseason.

Marner went seven games without a single assist at even strength, and Nylander followed up a great Game 1 with two assists in the final six games.

Heck, even Tavares took until the seventh game to score a non-empty net goal.

Losing the series falls as much on the players as it does the man who coaches them.

But you can’t get all new players over the course of one offseason. You can get a new coach, and after another disappointing end to the season, it would be a drop in the bucket for the NHL’s richest organization to move on from their head coach if they wanted to.

Perhaps he gets another chance and the Leafs have every intention of giving him the tools to adapt for next season. But halfway through his contract, Babcock’s end product simply hasn’t delivered as promised.