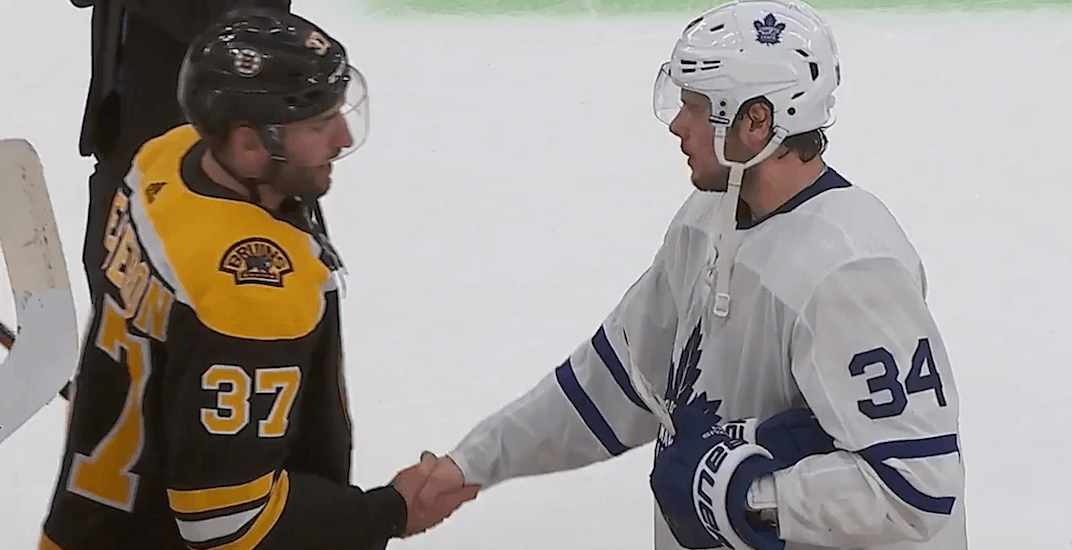 In a game where the Toronto Maple Leafs set out to slay the dragon, they were instead burned in familiar fashion.

The Leafs’ season ends the same way that it ended last year and the same way it ended in 2013: in Game 7 at the TD Garden in Boston at the hands of the Bruins.

Toronto lost the game 5-1, though the game was closer than the score indicates.

What will sting for the Leafs is that the Bruins’ top guns weren’t the difference in this game. In many ways, the Leafs beat themselves with mistakes on the defensive end and in goal, while they couldn’t capitalize on enough chances at the offensive end.

After a relatively evenly played start to the game, the Bruins got on the board first on a bizarre-looking goal with just over five minutes left in the first period. Joakim Nordstrom, who scored just seven goals during the regular season, banked a bad-angle shot off Frederik Andersen’s glove and into the net, as the puck squeaked just inside the post.

A pair of errors led to the opening goal, as Andersen missed an opportunity to freeze the puck and Travis Dermott’s outlet was picked off at the blue line.

Three minutes later, the Bruins doubled their lead after Jake Gardiner’s reverse pass behind the net went awry. Marcus Johansson was in the right place at the right time and swung to the front of the net, beating Andersen with a perfect shot off the post and in to give Boston a 2-0 lead.

The Maple Leafs controlled most of the play in the second period, getting an important goal from John Tavares in the first five minutes to cut Boston’s lead in half. Tavares had just jumped on the ice and picked up a pass from Tyler Ennis, who created a turnover on the side boards.

John Tavares gets the @MapleLeafs on the board! 🚨#StanleyCup pic.twitter.com/VhSUwcKkQw

The goal was the first by Tavares since his empty netter in Game 1.

Toronto outshot the Bruins 13-8 in the second period, but Boston nearly extended their lead to 3-1 on this glorious chance by Brad Marchand.

Huge sprawling save on Marchand. pic.twitter.com/81VA2PbyDK

Boston got the insurance goal early in the third period from Sean Kuraly. Morgan Rielly backed up too far on the play, giving Kuraly too much room.

Great effort from Sean Kuraly to make it 3-1 @NHLBruins!#StanleyCup pic.twitter.com/8JrFqx8bQE

Boston added salt in the wound in the form of two empty net goals, and will move on to play the Columbus Blue Jackets in the second round.

A big concern coming into the game for Toronto was the Bruins’ power play, yet that wasn’t a factor, as the Leafs received the only two power plays awarded. The Leafs should have been awarded a third power play, but a Zdeno Chara sucker punch on Tavares at the end of the second period went undetected.

Here is the cheap shot by Chara on an unsuspecting Tavares. #LeafsForever pic.twitter.com/kraVmKh80r

For the Leafs, it’s another bitter end to an otherwise impressive season, as the team is ousted in the first round for a third consecutive season. Despite not blowing a third period lead this time, it could sting more for the Leafs, who were poised for a deeper run this year.

Instead, they have a long offseason to ask questions, make changes, and wonder ‘what if.’