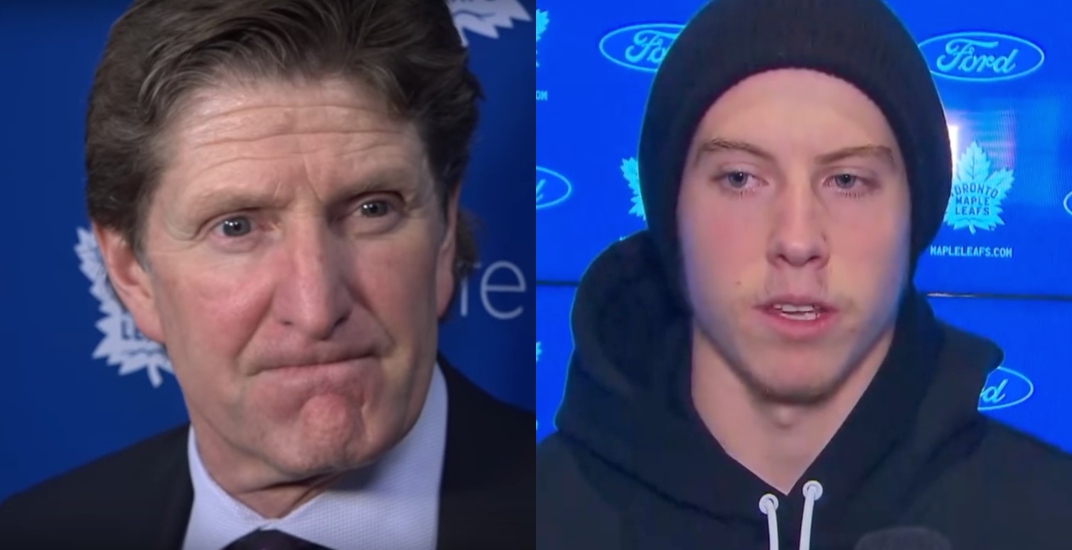 Mitch Marner was put in a tough spot at Toronto Maple Leafs practice on Monday, though it doesn’t compare to the awkward position he found himself during his rookie year.

The Leafs’ young star answered questions about a bizarre coaching tactic from Mike Babcock three years ago, when Marner was just breaking into the league as a 19-year-old.

The story, first uncovered by Terry Koshan of the Toronto Sun, alleges a Leafs rookie was tasked with ranking every player on the team in order of how hard they worked. Babcock later shared that information with the players ranked near the bottom.

This is insanely fucked up by Babcock.

Marner confirmed on Monday that he was the rookie in question, but downplayed the experience.

“It was just surprising,” Marner told reporters. “It’s so long ago now. Honestly, I really kind of forgot about it until the report came out. It’s over with now. It’s done with. I was lucky enough that the guys that were there with me, none of them took it to heart. They knew it wasn’t up to me.”

#Marner speaks on the list of hardest/least hardest working players that #Babcock had him make and then released during his first year in the NHL.

The relationship between teammates is vitally important for hockey players, so for Babcock to put Marner in that situation as a teenager was puzzling, to say the least. Questioning a player’s work ethic is a very serious allegation in the NHL.

The players ranked at the bottom of the list were upset, but not at Marner, according to TSN’s Darren Dreger. They were pissed at Babcock for orchestrating it in the first place.

I reached out to Mike Babcock today about the Mitch Marner story, as reported by @koshtorontosun. Via text, he replied, “I was trying to focus on work ethic with Mitch — focusing on role models — ended up not being a good idea. I apologized at (the) time.”

Babcock, for his part, has now admitted that it wasn’t a good idea and says he apologized at the time, according to Sportsnet’s Elliotte Friedman.

This isn’t the only time Babcock has used a proxy to get his message across. He essentially agreed with Alex Ovechkin’s comments last month about the Leafs “playing for themselves” instead of playing for a Stanley Cup.