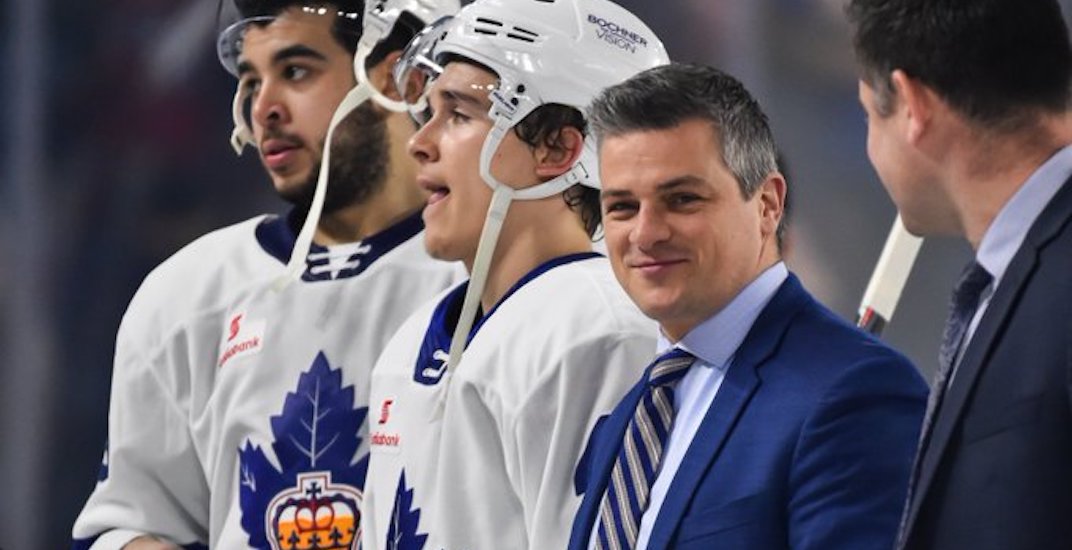 Six consecutive losses were enough to do Babcock in, and stepping into his place is Sheldon Keefe, newly hired for his first NHL head coaching gig after spending four full seasons with the AHL’s Toronto Marlies.

The opportunity for a new head coach is one that many Leafs fans have been clamouring for, but one that still may have come sooner than many expected. With the Leafs choosing to move forward with Babcock to start the season, it seemed like he’d be given at least until the traditional Christmas/New Year review period for the NHL coaching carousel to begin.

But it’s likely Leafs management saw overarching issues trending back to last season, and decided Keefe was the guy to right the ship moving forward.

Here are five things to know about Keefe:

At just 39 years of age, Keefe is the second youngest coach in the NHL, as just Chicago’s Jeremy Colliton at age 33 is younger.

Keefe is 17 years older (to the day) than Auston Matthews, which is half of the age difference between Matthews and the 56-year-old Babcock.

Interestingly enough, Babcock was also 39 when he began his NHL head coaching career.

Had he stayed with the Leafs this season, Patrick Marleau would have actually been a year and two days older than Keefe.

2. He has a long history with Dubas

Ask anyone what they know about Keefe, and they’ll probably start off by telling you he used to coach the Sault Ste. Marie Greyhounds when current Leafs general manager Kyle Dubas was the team’s GM.

The pair spent two seasons together before Dubas was poached by the Leafs to become their assistant GM in 2014, with Keefe getting hired to run the Marlies a year later.

Much of Dubas’ responsibilities as assistant GM included being general manager of the Marlies, where the two worked closely together from 2016 to 2018. They oversaw two 50-win seasons in three years, as well as seven AHL playoff series wins.

Keefe’s yet to have a losing season as a head coach, reeling off a playoff appearance in every season at all three levels he’s coached.

His ascension to getting the job as coach of the Leafs was a fairly linear one – owner-coach of the CJHL’s Pembroke Lumber Kings, coach of the Greyhounds, and then the Marlies.

In 2018, Keefe captured Toronto’s first Calder Cup as AHL champion, to go along with his 2011 RBC Cup as National Jr. A champion.

His 2014-15 Greyhounds team led the OHL with 54 wins, but eventually fell in the third round of the playoffs to the Connor McDavid-led Erie Otters.

4. He has already coached most of the players

While some coaches step into their first NHL gig in a new city or a new organization, Keefe is no stranger to the majority of the Leafs’ roster.

Andreas Johnsson, Travis Dermott, and Trevor Moore were among the players who raised the Calder Cup with Keefe.

But even before that, William Nylander and Kasperi Kapanen were also Keefe’s 1-2 punch of young guns back in 2014-15.

In total, 14 of the current Leafs have already played for Keefe at some point in their careers, which should ease any expected growing pains.

Keefe first gained some notoriety in the early 2000s as the captain of the Barrie Colts, and a client of agent David Frost. You may recognize Frost’s name from him being the target of a murder conspiracy of former NHL player Mike Danton, a teammate of Keefe’s and a fellow Frost client and Brampton native.

After winning the OHL championship with Barrie, Keefe infamously refused to shake OHL and CHL commissioner David Branch’s hand, taunting him during the trophy presentation.

Consecutive 100+ point seasons in his final two junior years showed that he likely had the skillset to play in the NHL. But Keefe’s playing career at the top level lasted 125 games, all of which were with the Tampa Bay Lightning. He totalled 24 points, and was out of the NHL within three seasons.

Despite his association with Frost and Danton, Keefe has kept his resume clean since and stayed out of controversy.

In a 2015 interview with the Toronto Star, Keefe said that he’s “grateful for opportunities people kept giving me despite all the baggage I carried with me.”

Now, it’s up to Keefe to see how he’ll make the most of this next opportunity.