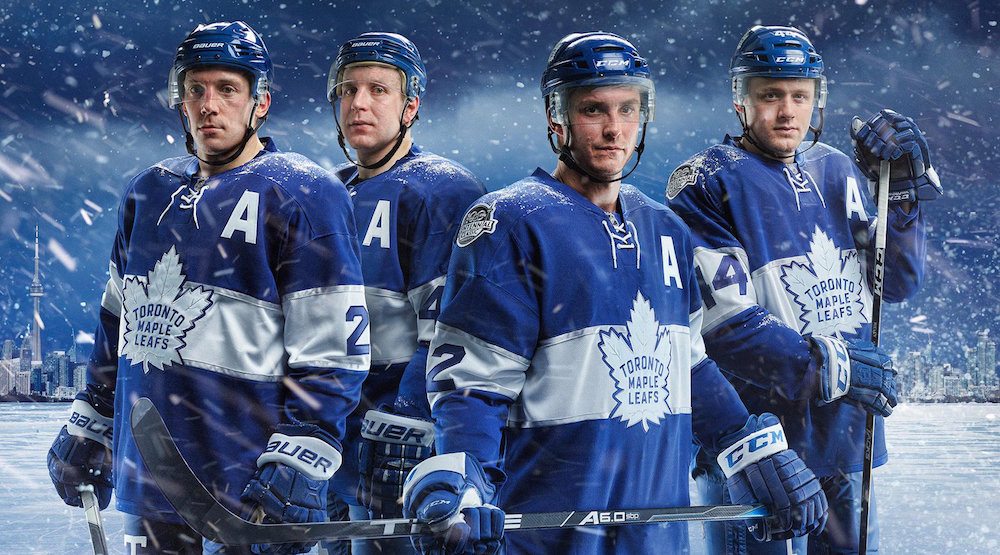 The Toronto Maple Leafs have unveiled the uniforms they will wear for the Centennial Classic against the Detroit Red Wings on January 1 at BMO Field.

Like many outdoor game uniforms in recent years, the look is sharp and retro in feel, although it’s a jersey they’ve never worn before.

Certainly, it looks better than what the Red Wings will be wearing:

The logo used is the same one as their current jerseys. The two most notable additions are a silver-trimmed white band and the letter T on the pants.

Here’s how the Leafs describe the new look:

The uniform is a contemporary variation of their home sweater, which celebrates the history of the team while giving a symbolic nod to the next century of Maple Leafs hockey. The iconic Maple Leaf crest, which is taken from the team’s newly redesigned home uniform, the bold singular band of white that encircles the sweater, and the veins within the crest are trimmed in silver as a celebration of the National Hockey League’s and the Maple Leafs’ 100th year. The sweater also includes a commemorative NHL Centennial Classic™ shoulder patch.

Several elements of the uniform pay homage to the team’s past. The words ‘Honour, Pride and Courage’ stitched into the back of the neck of the sweater, similar to the team’s new sweaters, are taken from a famous Conn Smythe quote and represents the values the franchise strives to represent. The horizontal singular band of white across the body of the sweater is reminiscent of the Toronto St. Pats sweater worn from 1922 to 1925, and as a tribute to the franchise’s origin, the pants are adorned with a white Toronto Arenas “T.”

“The NHL Centennial Classic will be a special moment in our year-long celebration of 100 years of Maple Leafs hockey and this new sweater offers a signature look for the occasion, combining important elements of our club’s past, but also our present and future as it features the new Maple Leaf crest,” said Brendan Shanahan, Toronto Maple Leafs President and Alternate Governor. “We look forward to this event being a memorable day for both our fans and our team and this unique sweater will be an important part of those memories.”