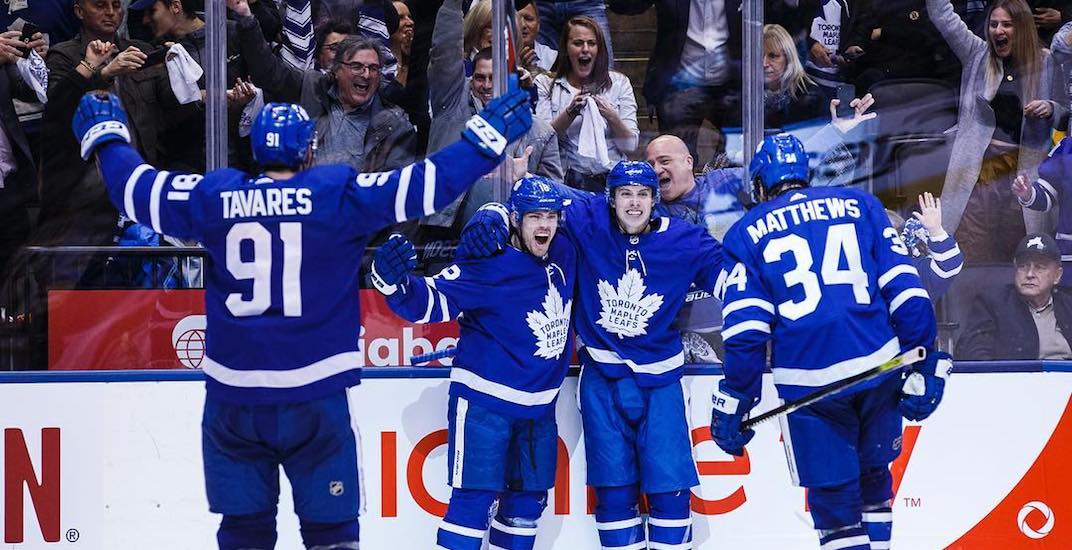 Facing the heat of three consecutive first-round losses, the Toronto Maple Leafs saw July 1 come and go without spending any more than $700k per season on new free agents.

While the team’s biggest free agent signing of the day was a 36-year-old centre in Jason Spezza on a one-year, league minimum contract — general manager Kyle Dubas made a huge splash with a pair of multi-player trades.

Defenceman Nikita Zaitsev and winger Connor Brown were shipped off to the Ottawa Senators, with defencemen Cody Ceci and Ben Harpur being sent to Toronto along with a draft pick and prospect each.

Kerfoot assumes Kadri’s role as the team’s third line centre. Putting up totals of 43 and 42 points over his first two NHL seasons, the defensively-solid Kerfoot is currently a restricted free agent.

Patrick Marleau was also shipped off on day 2 off the draft to Carolina, who subsequently bought out his contract.

Kerfoot and Spezza are the two main additions here who have roster spots locked up. As of today, the Leafs’ lineup looks something similar to this:

While the chance of an offer sheet is still possible for Mitch Marner, let’s assume for simplicity this scenario that he’s on the roster for all 82 games. That’s eight returning forwards, two new ones, and two spots up for grabs in training camp.

Zach Hyman is slated to be out until around November (at least) as he recovers from an ACL tear, which if nothing else allows for a little more competition for a full-time roster spot.

Look for 21-year old winger Jeremy Bracco to push to make the team out of training camp. The Leafs’ second-round selection in 2015 led all Toronto Marlies with 79 points in 75 games this past season.

Russian free agent signing Ilya Mikheyev could slot into the fourth line (or higher, if performance merits). Winger Kenny Agostino, who split time between the AHL and NHL last season is another option. Journeyman Nick Shore, who played in the KHL last season, was also signed by the Leafs to a one-way deal.

Overall, it’s hard to find to much to complain about in one of the league’s most dynamic forward groups.

The left side of the defence remains untouched from last season. Morgan Rielly had a career year as he established himself as one of the game’s best offensive defencemen. If they do play together, Rielly-Barrie could be the league’s most dangerous offensive pairing, as the two combined for 131 points last season.

Unrestricted free agent Jake Gardiner is unlikely to return. A staple of the Leafs’ defence since his debut in 2011, back injuries limited Gardiner to just 62 games this past season.

A restricted free agent, a contract for Ceci has yet to be officially announced, but it sounds like he will be inked by Toronto shortly to a one-year deal.

Yes, Ceci verbally agreed to a one year, $4.5 million contract with the Leafs. Arb case likely would have come in above that and that wouldn’t have worked for Toronto. Good opportunity for Ceci to raise his market value. https://t.co/wgtJP7T7rJ

Ceci has averaged more than 23 minutes a night in each of the last three seasons, but his team has been outscored 156-218 at even strength while he’s on the ice over that same timeframe and could be the team’s biggest liability.

Ben Harpur has yet to play more than 51 games in a single NHL season. The 23-year old could see some action as a stopgap throughout the season, especially as Travis Dermott recovers from offseason surgery.

In the final right-handed spot, it could be 2017 first-round draft selection Timothy Liljegren making the jump to the NHL. The 20-year old Swede was a rare teenager in the AHL this past season, putting up 15 points in 43 games while often skating on the team’s top pairing. Justin Holl is also an option to return, despite not often being slotted into Mike Babcock’s lineup card just 11 times last year.

However, don’t be surprised if the Leafs make another move, if even a minor one. It’s hard to look at that right side and feel like it’s complete for a team that should be competing for a championship.

Nothing really changes on this front, at least not yet. Frederik Andersen assumes the starter’s role, while both Garret Sparks and Michael Hutchison are under contract for this season and likely to compete for the backup role.

As Andersen has been remarkably consistent with .918, .918, and .917 save percentages in his three years in Toronto, starting goaltending is not really an area of concern.

Are the Leafs a better team than they were in April?

Whatever the fate is for the Leafs this upcoming season, about a third of the roster is already different than what was trotted out in the playoffs.

Kyle Dubas has shown he’s not one to sit back and stay the course with a flawed roster, although it does feel like there’s more to come. While the Leafs might not have room for another star, much of the team’s improvements have come from simply trimming out the margins of their roster, and allowing depth signings or internal prospects the opportunity to earn that ice time.

The Leafs should be on pace for a third consecutive 100-point season, which would be a first in their century-long history. But taking the major next step towards a Stanley Cup — winning the franchise’s first playoff series since 2004 — is still the barometer for success in a market expecting a long postseason run.