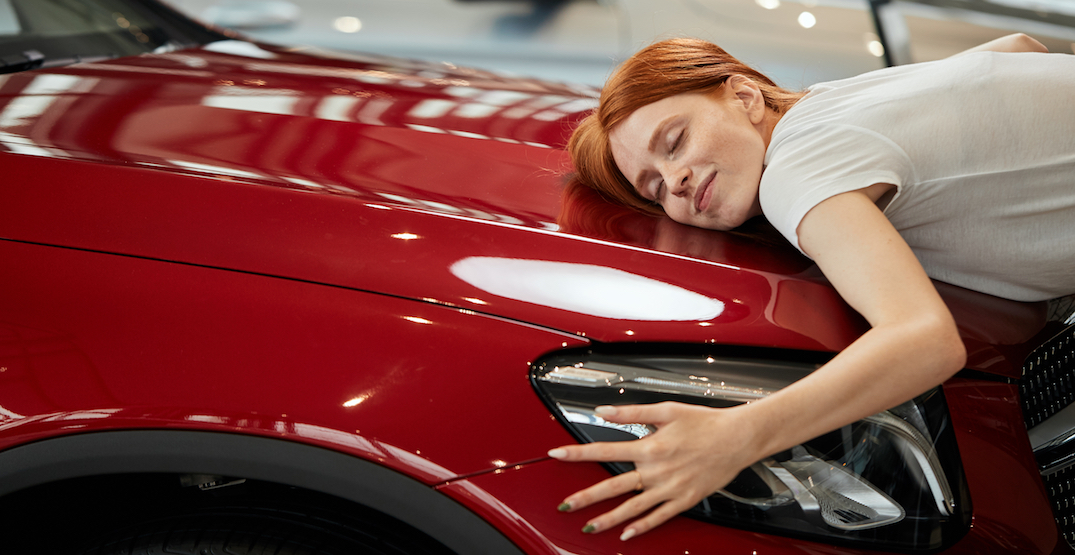 Car owners tend to have strong feelings of loyalty — and loathing — regarding specific automobiles. The Clunker Junker has just released a study determining the most loved and most hated car brands for every country in the world. 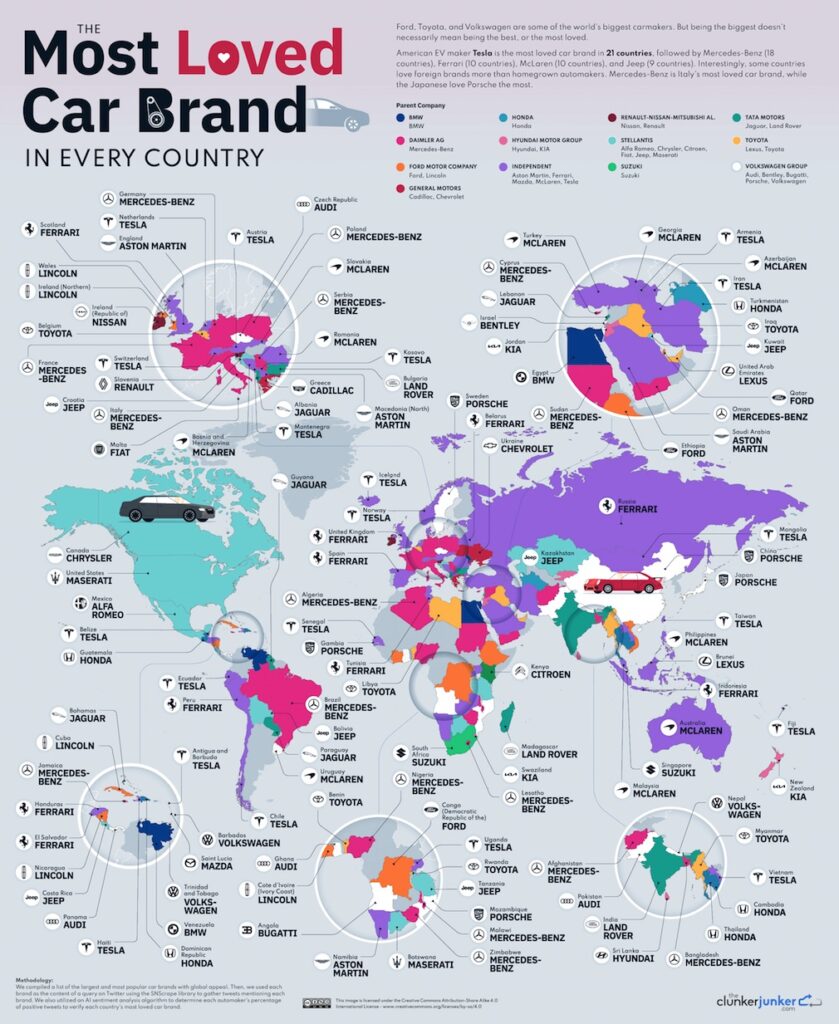 Out of all the many car brands in Canada, Chrysler is the favourite. Canada is the only country in the world in which Chrysler comes out on top.

Tesla is the top pick in 21 countries, including Switzerland, Norway, Taiwan, Vietnam, and Chile. Trailing Tesla in popularity are Mercedes-Benz (18 countries), Ferrari (10), McLaren (10), and Jeep (9). In the United States, Maserati is the favourite brand.

The Clunker Junker compiled its data by looking at geotagged tweets that mentioned car brands, then using AI to determine positive and negative sentiments. 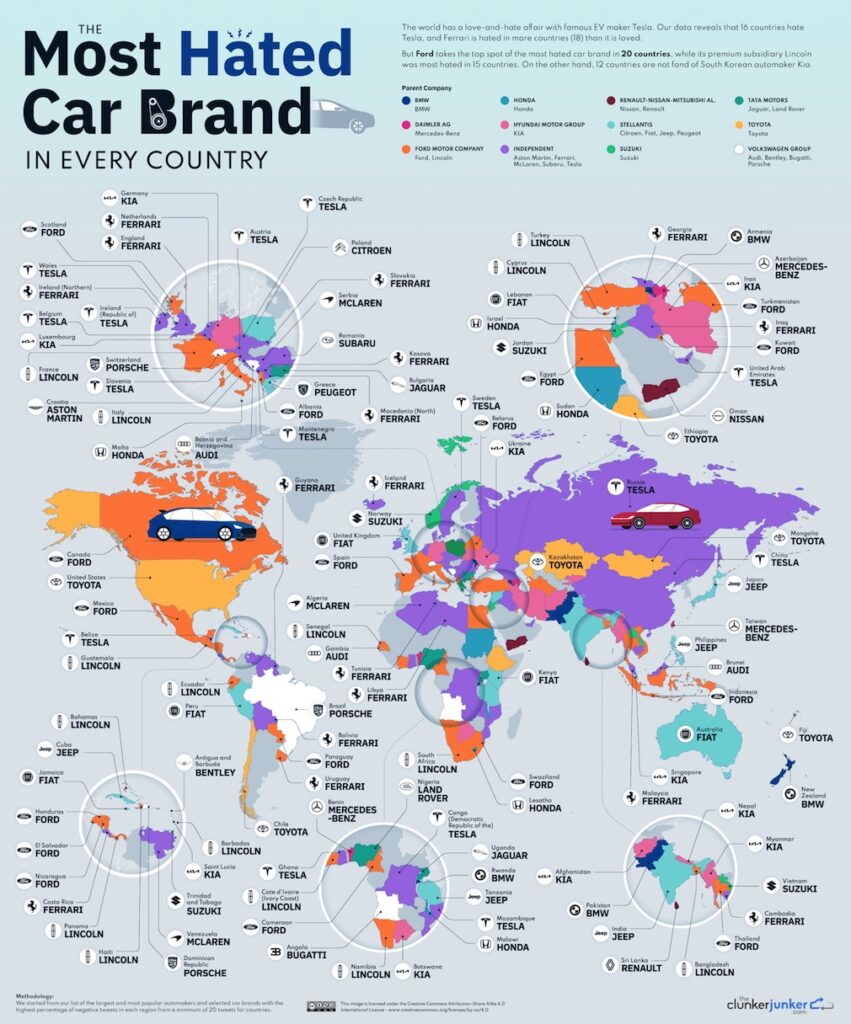 Canadians dislike Ford the most — and lots of other countries share our antipathy toward the American car manufacturer. Ford is the most hated automaker in 20 countries around the world, including Mexico, Scotland, Egypt, Thailand, and Spain.

Other car brands that rank high on the unpopularity list include Lincoln (a subsidiary of the deeply unpopular Ford), with 15, and South Korean automaker Kia, with 12. Fiat is the least favourite brand in the United States. 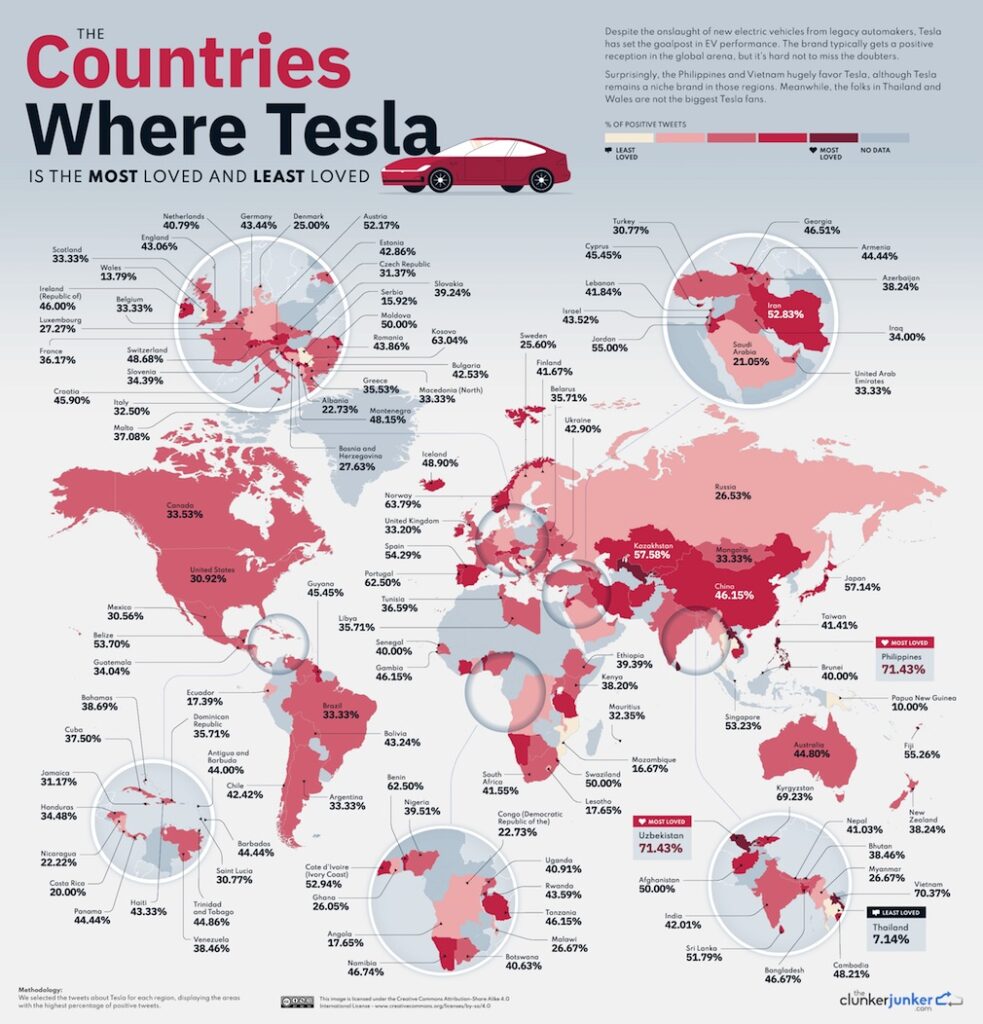 The Clunker Junker’s study took a closer look at Tesla, the electric vehicle company practically synonymous with billionaire Elon Musk. The study revealed it to be the most popular automobile maker worldwide, topping the list of most loved car brands in 21 countries, but also widely disliked. It is the most hated automobile brand in 16 countries, trailing only Ford and Ferrari.

The study also examined which countries have the strongest feelings about Tesla. Tweets about Tesla from the Philippines and Uzbekistan were 71.43% positive, similar to Vietnam (70.37%) and Kyrgyzstan (69.23%).

Canadians’ feelings fall somewhere in the middle, with 33.53% of the tweets about Tesla expressing positive sentiments, which is similar to the United States (30.92%).