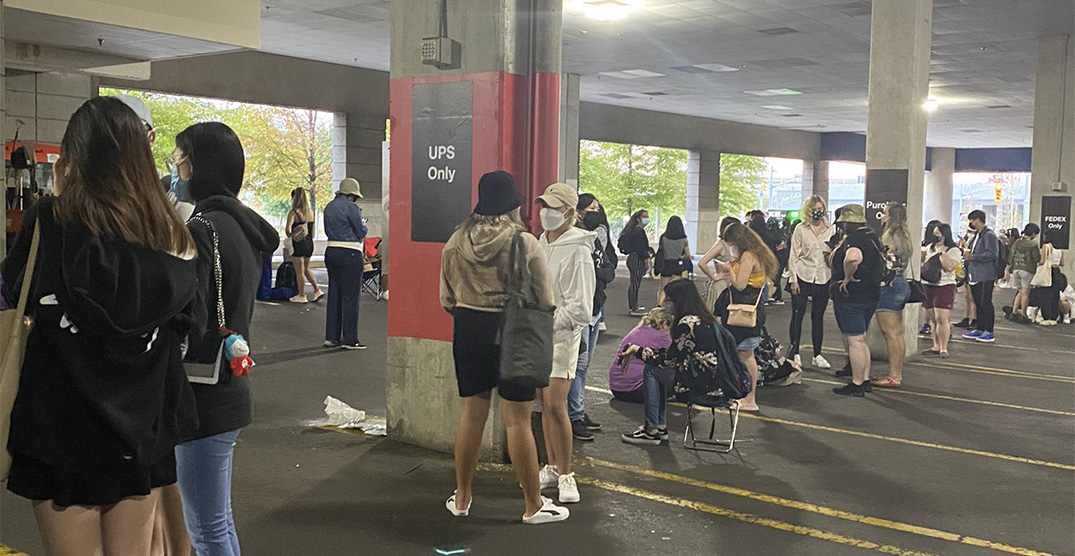 Hundreds of people lined up in the Yorkdale mall parkade Thursday morning to visit a pop-up shop selling Line Friends and BT21 merchandise.

BT21 is a set of eight characters created in collaboration with K-pop band BTS, and fans of the boy band got in line as early as midnight to snap up some of the plushies and headbands for sale.

“I spent way too much and will [probably] be back,” shopper Kait Martin shared on Twitter. “Shout out to my midnight gang.”

#BT21POPUP SUCCESS! 💜 Okay, not completely. I didn’t get a Cooky headband (if u did and want to trade for Mang, DM me) and selection was SO LIMITED. But I spent way too much and will prollie be back! Shout out to my midnight gang! 💜 #BTS #Toronto #Yorkdale #BT21 @_LINEFRIENDS pic.twitter.com/fBEfkRgyvL

Some people brought camping chairs to help with the overnight wait, while others could be seen sitting on towels.

ITS A CONCERT MERCH LIKE BUT FOR BT21–it’s their 🇨🇦 comeback. #BT21 yorkdale pop-up pic.twitter.com/TyewfLkO61

One shopper advised fans who weren’t already waiting early in the morning to stay home because the line was so long.

if ur planning on going to the bt21 yorkdale pop up today. dont. its a 6 hour wait pic.twitter.com/OFrlmSVxx4

Other fans were glad they braved the line, and shared photos of the store’s cute interior and the items they bought.

The inside of the bt21 pop up store looks so cute at yorkdale pic.twitter.com/alutakNxcW

bt21 pop up at yorkdale was super fun!! pic.twitter.com/XQdZeKKKel

The last time Sukoshi Mart hosted a BT21 pop-up was in 2018 at Scarborough Town Centre, and that event sold out of products in two days, the company said in a news release.

If you missed the initial memo about the Yorkdale pop-up store there’s no rush — it will remain open until December 2021. You can find it in the old Innisfree location across from Uniqlo.