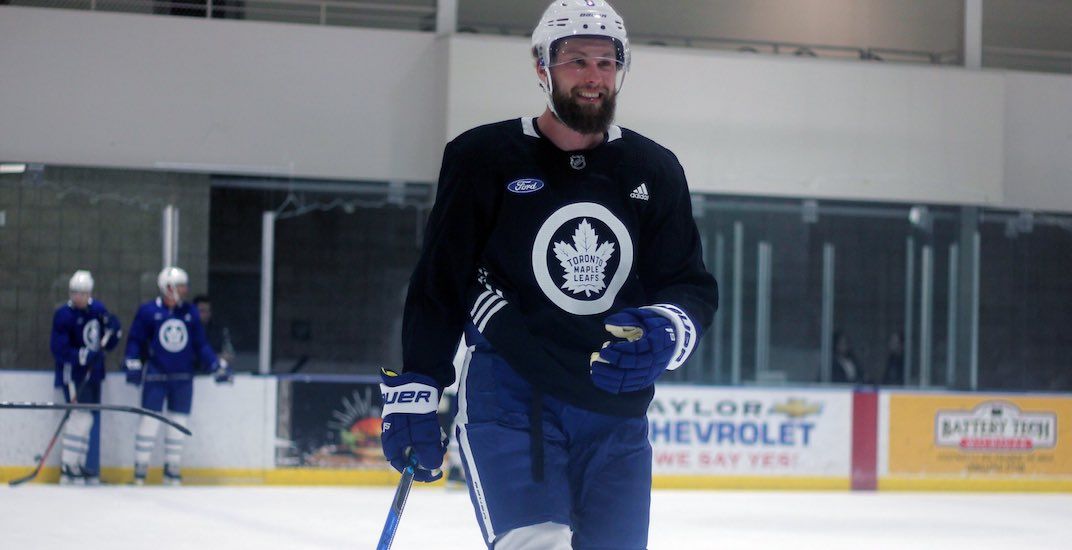 After acquiring defenceman Jake Muzzin from the Los Angeles Kings, the Toronto Maple Leafs bolstered their roster well ahead of the February 25 trade deadline.

A 2014 Stanley Cup champion and typically playing top-four minutes with the Kings, the 6-foot-3, 215-pound defenceman and Woodstock, Ontario native will slot immediately into the Leafs’ top pairing.

Muzzin will partner with Morgan Rielly and allows Babcock to move Hainsey down to 3rd pairing. Will be an excellent resource for Dermott.

At age 29, the newest Leaf has put up three 40-point seasons while finishing top-20 in Norris trophy votes in 2015-16. Muzzin’s acquisition wasn’t at a low cost: losing a 2019 first round pick, as well as prospects Sean Durzi and Carl Grundstrom, but the pieces given up showed the Leafs aren’t looking to give away players from their current roster easily.

The biggest winner in the trade might actually be Leafs defenceman Ron Hainsey, who (at least initially) moves into a third-pairing role after playing on the team’s top pair alongside Morgan Rielly for most of the past season-and-a-half.

While Hainsey’s own personal statistics might decline after being moved away from the team’s top point-getting defenceman, it shelters him from the opposition’s toughest matchups and lessens the fatigue on his 37-year-old body from playing top-pairing minutes.

Meanwhile, the biggest loser in the trade could end up being defenceman Jake Gardiner. Although it sounds like his on-ice role won’t change much, Muzzin’s acquisition bumps Gardiner down the Leafs’ priority list. While Muzzin is under contract next season, Gardiner is a pending unrestricted free agent.

With younger players such as Auston Matthews, Mitch Marner, Kasperi Kapanen and Andreas Johnsson all due for contract renewals in the offseason,  Gardiner probably doesn’t have a spot in a cap-crunched Leafs roster. The Leafs have just over $4 million in cap space to work with for this season already, and Muzzin’s $4 million cap hit for next year likely eats up any money that would’ve gone to Gardiner moving forward.

But now that the Leafs have made their first major external roster addition of the season, fans and media have begun to ask: what’s next?

It is that salary cap crunch moving forward that makes this playoff run so important for Toronto. With Matthews, Marner, and Kapanen still on the final years of their entry level contracts, they’ll be getting those three at a gloriously cheaper rate than what will come moving forward.

Acquiring a proven top-four defenceman might be step one, but the Leafs seem like they’ll need to make another move to fully round out their roster.

Sitting with the league’s third-best goal differential at +34 is respectable, but you only get so many kicks at the can and it does seem despite the looming threat of the Tampa Bay Lightning, this could be the Leafs’ best opportunity out of the next few seasons to make a serious playoff run.

Leafs general manager Kyle Dubas has insisted he’s not willing to trade for a player who’s only going to be in Toronto for the remainder of the season. In each of the past two years, Toronto acquired a fourth line centre (in Tomas Plekanec and Brian Boyle), only to end up losing the players for nothing after Toronto bowed out in the first round of the playoffs.

So if we’re to take Dubas at face value, you likely won’t see Toronto taking a run at a player like Columbus Blue Jackets’ pending free agent forward Artemi Panarin, who’s been in the news recently after his agent spoke about his unwillingness to sign a contract extension.

You won’t necessarily see Toronto even go after less marquee names like Carolina’s Micheal Ferland or New York’s Mats Zuccarello, as both also are expiring at the end of this season. There really aren’t too many pending free agent defencemen, if any, that would a) be better than the Leafs’ internal options and b) be affordable.

But with what they gave up in the Muzzin trade, the Leafs showed they weren’t willing to lose a player like Rasmus Sandin or Timothy Liljegren, the two defencemen they selected in the first round of the last two drafts. Assuming the Leafs are relatively consistent in their thinking, they’re setting a bar that they’d need to acquire an affordable player better than Muzzin to part with either of those two, which seems quite unlikely given the Leafs’ cap situation moving forward.

So while the Leafs might not be looking to acquire a marquee name to finish building their blue line, a few players with at least another season on their contract from struggling teams come to mind.

Florida’s Mark Pysyk, making $2.7 million next season has put himself into the conversation as a possible piece of acquisition. In Philadelphia, Radko Gudas’ $3.35 million deal could also be worked in by the Leafs. Both are positive possession players over the course of their career currently on teams below the playoff bar.

The Leafs currently have three defencemen in Igor Ozhiganov, Martin Marincin, and Justin Holl that are out of the lineup but still with the team. It seems like the next move is right around the corner, but only time will tell if Dubas’ plan will pay off.