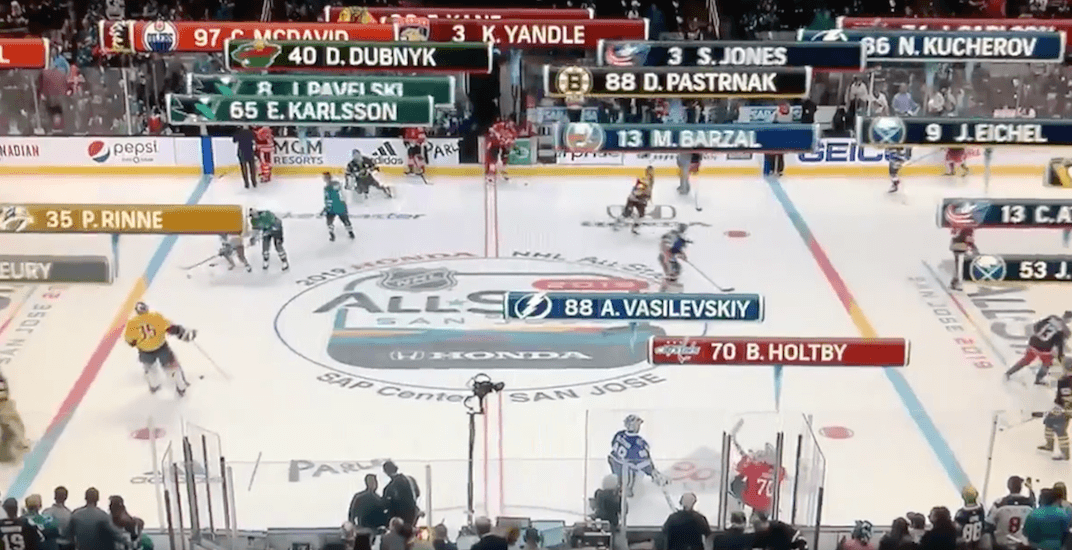 Hockey is meant to be enjoyed, and there’s no event that shows off the fun side of the sport like the NHL All-Star Game.

The trick is to not take it too seriously, realize it’s geared towards younger or newer fans, and simply sit back and enjoy some of the game’s best players – and mascots – strut their stuff.

The NHL rolled out its new player and puck tracking for the event, and fans were treated to a bevy of features including distance from the net, shift lengths, and player banners.

I’d love to see more of this #HiTechHockey #NHL pic.twitter.com/0gNy2m6kWH

Here it is in action:

And this Roman Josi goal demonstrated the puck tracking, reminiscent of the FOX glow puck from the 90s.

Close, but just not the same.

Bring back the glowing puck! pic.twitter.com/PFWXIhYrXq

One of the top moments of All-Star Weekend took place off the ice, as Team USA gold medallist and CWHL forward Brianna Decker was rewarded for her (unofficial) winning efforts during Friday’s skills competition.

She didn’t receive the $25,000 winnings from the NHL because she wasn’t an official participant, but after #PayDecker became a trending topic on Twitter, CCM Hockey came through in a big way.

Sincerely thankful @CCMHockey You have been nothing but 1st class the last 5 years I have been a part of your family! Thank you for supporting the men’s and women’s game equally! #NHLAllStar #MadeofHockey #Hockeyisforeveryone https://t.co/IAQSLQEdnN

The NHL later donated $25,000 to the charity of choice of the four women who participated in Friday’s event.

The San Jose crowd was hoping for a Pacific Division win, but their odds were greatly diminished when Anaheim’s John Gibson couldn’t stop a puck to save his life.

Gibson let in seven goals on just nine shots in the first period.

Much has been made of the plight of the Edmonton Oilers recently, and Connor McDavid was reminded of what could have been if Devan Dubnyk hadn’t been jettisoned like so many others.

Dubnyk with some highway robbery on McDavid at #NHLAllStar. 👀 pic.twitter.com/DieBKVZwAt

Nashville’s Pekka Rinne made a save with his mask, and ended up drawing a secondary assist for his effort. He might want to get an apple painted on it.

With the Central Division well on its way to winning the first semi-final, Hockey Night in Canada play-by-play broadcaster Jim Hughson asked Calgary Flames/Pacific Division coach Bill Peters to give the people what they want – a Johnny Gaudreau shift with McDavid and Elias Pettersson.

Bill probably should have deployed that trio a bit earlier because they scored immediately after.

It must be Swedish law that says if you have a scoring chance in close, you have to try the the Peter Forsberg move. Thankfully for Gabriel Landeskog, it worked.

Young guns have taken over the NHL, but people forget Steven Stamkos is only 28 and his goal-scoring abilities know no bounds.

Check out this between the legs move in tight:

Steven Stamkos with an absolutely INCREDIBLE goal to tie it up!#GoBolts pic.twitter.com/JISGnrCide

The Philadelphia Flyers mascot is a menace. During the All-Star Game, Gritty made his rounds, and at one point he found a fan wearing a Pittsburgh Penguins hat. Naturally, he picked it up and chucked it as far as he could.

Projectile: confirmed. And it even made the NBC broadcast.

Could see it on the broadcast. pic.twitter.com/2VNrNxpRLW

Sidney Crosby shook after whatever illness kept him from participating in Friday’s Skills Competition to take home the All-Star Game’s Most Valuable Player award, and he claimed his new Honda amid a chorus of boos. Sharks fans clearly aren’t over the 2016 Stanley Cup Final.

He’s not all bad, though!

Sidney Crosby tosses a puck to an Alexander Ovechkin fan. Just a little salt in the wound that his favorite player didn’t show up. pic.twitter.com/uq2YXTNfXH

Crosby recorded four goals and four assists in the two games to claim the trophy, a new first in his illustrious career.