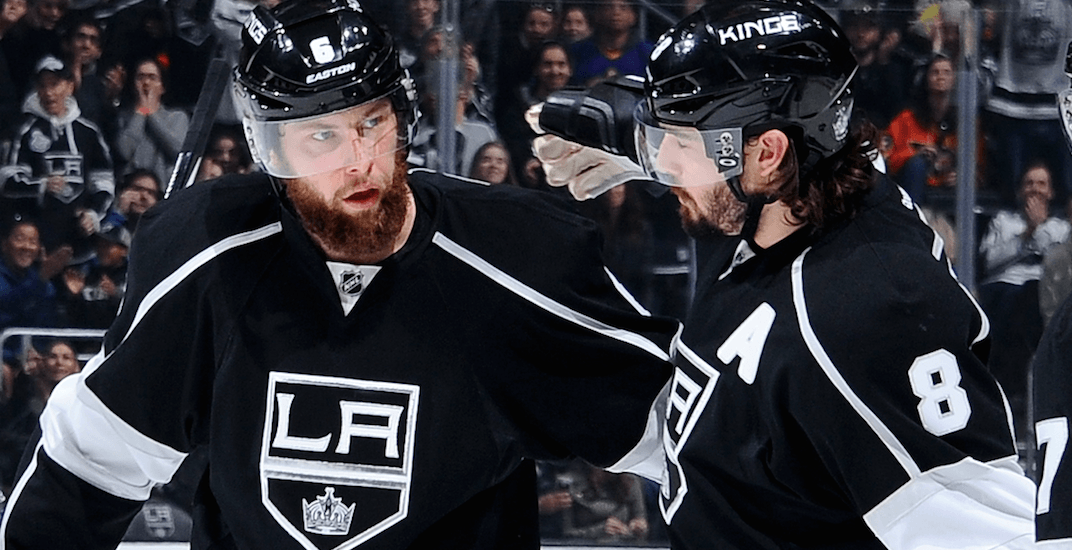 The Toronto Maple Leafs have pulled off a major trade, acquiring defenceman Jake Muzzin from the Los Angeles Kings.

.@SportChek Player Alert: The @MapleLeafs have acquired defenceman Jake Muzzin from Los Angeles in exchange for forward Carl Grundstrom, the rights to Sean Durzi and Toronto’s first-round pick in the 2019 NHL Draft.#LeafsForever pic.twitter.com/3DYt3w0dc1

Loaded with talent on forward and with stability in goal, the Leafs have been in need of an upgrade to their defence for some time.

And Muzzin, 29, certainly qualifies as an upgrade.

The 6-foot-3, 213-pound blueliner was a key member of the Kings’ last Stanley Cup victory in 2014. He’s under contract this season and next, with a reasonable $4 million cap hit.

An all-situations defenceman, Muzzin was second only to Drew Doughty among Kings defencemen in average ice time at 21:32. The Woodstock, Ontario native has topped the 40-point plateau in three of the last four years and has 21 points (4-17-21) in 50 games so far this season for a Kings team that needs to rebuild after years of contending.

Muzzin has been known to deliver bone-crushing hits, which will surely endear him to Leafs fans.

The key to the deal for Los Angeles is the first-round pick. The Kings also add Grundstrom, Toronto’s second-round pick in 2016, who is having a nice first full season in the AHL with 29 points (13-16-29) in 42 games for the Marlies.

Muzzin will partner with Morgan Rielly and allows Babcock to move Hainsey down to 3rd pairing. Will be an excellent resource for Dermott.

While the Leafs have long been in pursuit of a right-shot rearguard, Muzzin will reportedly play on a pairing with fellow leftie Morgan Rielly. Muzzin has the ability to play his off-side though.

Head coach Mike Babcock is familiar with Muzzin, having coached him with Team Canada at the 2016 World Cup of Hockey.

The Leafs have designs on winning a Stanley Cup this season and the addition of Muzzin makes that goal a little more realistic.