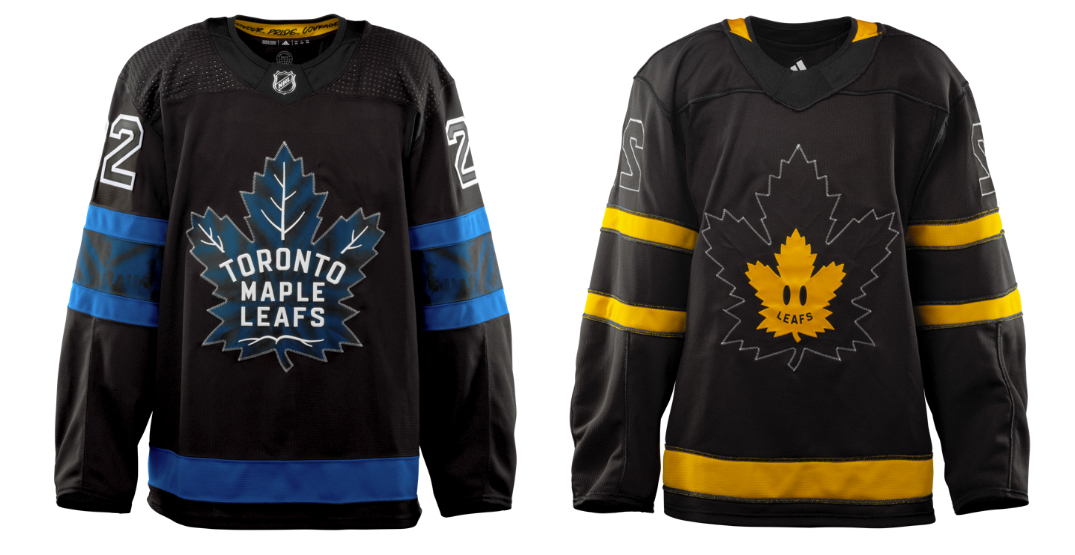 The Toronto Maple Leafs just dropped their most unique look yet, a collaboration with Justin Bieber creating a one-of-a-kind sweater for their Next Gen alternate jersey.

It’s already shaping up to be their most polarizing.

The jersey features a black base, white trim on the numbers, and blue accents for a Maple Leafs jersey that the team describes as a “uniform that has never been seen in sport.”

We’ll be rocking the black and blue, hby?

It’s also reversible, with the interior of the jersey sporting a black and gold Leafs logo inspired by Bieber’s drew house brand.

“We are excited to be able to take Next Gen to another level with this special uniform designed with our next generation in mind,” said Brendan Shanahan, Toronto Maple Leafs President and Alternate Governor. “The opportunity to collaborate with Justin and drew house to create such a unique alternate sweater will make it even more special for our fans and the team.”

Needless to say, it was met with a mixed reaction.

Worst Leafs Jersey I have ever seen. In the last two seasons we have now seen grey and black in our jerseys. Just stick to the Blue and White.

I sincerely hope you will never allow a yellow version to be worn in a real game.

This is the Toronto Maple Leafs.

The brand doesn’t need the Drake treatment like the basketball team did.

When you want to dress like daddy Marchand pic.twitter.com/aYwGVFs1MA

Is this gunna be like mighty ducks D2 and they’ll come out with different jerseys for the 3rd??

The black and blue is SO clean, OUUU. pic.twitter.com/UAycBAlPDt

Bieber and the maple leafs is not a good mix !!
His behaviour is more embarrassing to Canada than then the leafs playoff performance last year

That yellow jersey looks like it was a prize for mailing in 20 proofs of purchase for honey nut Cheerios. #cheaptrash

And there new home jersey pic.twitter.com/GyLHfqI4DU

The Leafs first introduced their Next Gen games in 2017 as part of the organization’s 100th-anniversary celebrations as a way to “mark a celebration of youth in the community and to unite fans of all ages through the team and the game of hockey.”

“My love for the Maple Leafs has always been a big part of who I am, and my passion for the team, and the passion of millions of fans, is stitched into this Next Gen sweater,” Bieber said. “I’m grateful to the Leafs for the chance to team up again to create something so authentic for the team and its fans.”

Toronto will wear the uniform at its Next Gen game against the New Jersey Devils on Wednesday.