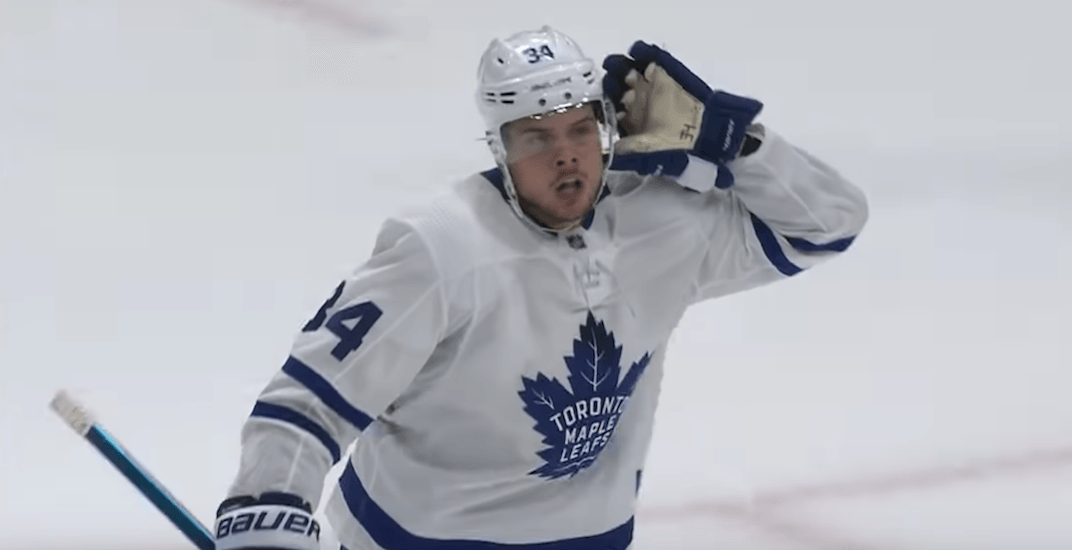 If there’s one thing that the 2018-19 Maple Leafs season has taught us so far, it’s that this is Auston Matthews’ world, and we’re all just along for the ride.

Matthews is off to another blistering hot start in his third NHL season and is once again putting the league on notice. In four games he leads the league with seven goals and is tied with teammate Morgan Rielly for a league-best 10 points.

But what makes this season different for Matthews is how he’s conducting himself on and off the ice. On the ice there is a much more noticeable confidence and swagger to his game, as seen with his Hulk Hogan-esque goal celebration during Sunday’s high scoring game against the Blackhawks in Chicago.

Auston Matthews scores to put the Leafs up! That celly. pic.twitter.com/y27CLdhiZM

Off the ice we are witnessing something we haven’t really seen from Matthews since he was drafted first overall in 2016: his personality. With Lou Lamoriello’s old school rules no longer sheltering Matthews from the media, he is doing what fans and pundits have expected from day one, he’s becoming a bonafide NHL star.

Matthews has been the focal point of articles by GQ and Sharp Magazines where he discusses his personal style and passion for fashion. In his interview with GQ, Matthews talks about the style of NHL players and how it’s catching up to the style of players in the NBA and NFL:

“I think the NHL, compared to other sports, is a little more reserved and traditional. We wear suits to all of our games. Other sports, they’re free to wear whatever and be creative. But I definitely think it’s evolved quite a bit. The guys are younger and they like to wear different stuff, like stuff that stands out and not just black and white.

“For me, it’s cool to see. And maybe one day down the line the NHL will want to do something like what basketball and football, where guys are free to wear whatever and get creative and make things a little more interesting.”

As one of the NHL’s fastest rising stars, and someone that was born in a non-traditional hockey market, Matthews is trying to break the mold for NHL players by using fashion as his tool. In doing so he’s revealing to North American sports fans that hockey players can stand out like NBA, NFL or MLB players. Something that few NHL players have tried to do or have been able to do.

Matthews’ eye for fashion and wanting to move the needle forward for NHL players gets revealed more in-depth in his interview with Sharp Magazine:

If there’s one aspect of Dubas’ “express yourself” movement Matthews is especially fond of, it’s the chance to more prominently flex his personal style (“a mix of the business look and street look”) as part of his personal brand. A big Russell Westbrook fan, he thinks the NHL could benefit from engaging in its own fashion wars.

“Hockey is different,” he says. “Basketball, football, and baseball, they like to market players individually. That’s something hockey hasn’t quite gotten into yet. It has a lot of culture, a lot of embedded roots. It’s very team-oriented. But I don’t think it hurts to push the top players and what they do, what they wear. It helps grow the game.”

The NHL has always had a problem in creating star players that can transcend the game and become figures in popular culture. While there isn’t a shortage of elite players such as Sidney Crosby, Alex Ovechkin, and Connor McDavid, who was also recently featured in GQ, outside the hockey world they aren’t nearly as well known as LeBron James, Russell Westbrook, Tom Brady, Odell Beckham Jr., or Bryce Harper.

Typically, whenever NHL players flash any sort of individualism outside of the rink they immediately face criticism from a hockey community that’s rooted in its traditional ways. It’s a culture that always likes to put the team first before anything else and likes its players to fit a certain mold that makes them come off as stereotypically robotic when they’re in public.

Certainly, that was the case with Lou Lamoriello in charge.

By being able to freely express himself, it appears to have unleashed something in Matthews that not only has him racking up points left and right for the Leafs, but also has him emerging as the face of a new generation of hockey players that can potentially break through and transcend the sport.