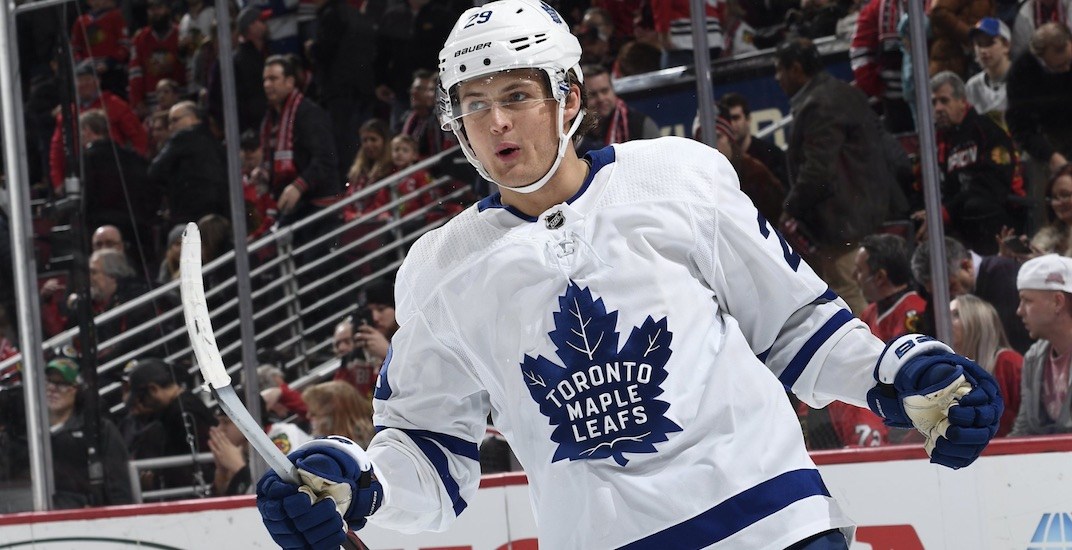 The Toronto Maple Leafs sure are scoring a lot of goals lately.

Coming off a dramatic 7-6 overtime win over the Chicago Blackhawks, the Leafs have now scored 13 goals in just three games this season.

They do have a record of 2-1-0, but those wins have come in overtime at the expense of Montreal and Chicago – neither of whom made the playoffs last season – and the lone loss was handed to them by an Ottawa Senators club that’s expected to sit at or near the bottom of the standings throughout the season.

All the while, restricted free agent Nylander remains in Sweden without a contract and with a Dec. 1 deadline looming, at which point he’ll be forced to sit out the 2018-19 season if he and the team have yet to find resolution amid the current stalemate. That’s one option, and the least desirable for both parties, to be sure. The other two would be agreement on a contract, whether it be a bridge deal or more long term, or a trade, preferably for a top-pair defenceman to fix this team’s most glaring need.

In all honesty, it’s not illogical to argue that a resolution to the Nylander situation could or should be a trade for a defenceman to replace Ron Hainsey on the top pair, because any way you look at it, he doesn’t belong there. But general manager Kyle Dubas appears to believe that Nylander’s presence would offset some deficiencies on the blue line by quite simply increasing Toronto’s propensity to keep the puck away from the opposition.

The best defence is a good offence

Through three games, the Maple Leafs have scored 13 times, good for a goals per game average of 4.33. They’ve also allowed 13 goals, giving them the exact same goals against average on a per game basis. In terms of shots on goal, Toronto is registering 32.3 per game while allowing 30.3, and they’re middle of the pack in terms of shot attempts at 5-on-5, with a Corsi-for percentage of 51.25.

Add it all up and the Maple Leafs are marginally outshooting and out-attempting the opposition, and breaking even in regards to scoring, all of which is neither overly encouraging nor discouraging at this point in the season, although the quality of the competition to date isn’t projected to be overly problematic for legitimate Stanley Cup contenders.

There’s no denying this team can and will score often, and the possibility of deploying Matthews + Nylander and Tavares + Marner is downright unfair, not to mention the speed and skill that’s present in the bottom-six. By not addressing the blue line this past offseason with a true difference maker, it appears as though Dubas’ plan is to outpace the other team, and it’s working out so far by a slim margin. Still, the extra boost that the Swede can provide has to be part of it or this surefire playoff team will struggle when it matters most.

The Leafs forward corps is formidable enough to dominate possession on any given night, and the addition of Nylander would only push the play into the offensive zone with more regularity, reducing pressure on the defence to shut things in front of Frederik Andersen.

Back to that Dec. 1 deadline. According to the good folks at Cap Friendly, “Restricted Free Agents who do not sign contracts by December 1 of a given year will be ineligible to play within the league for the remainder of that season.” What’s interesting about this is that the later Nylander signs, the more beneficial it could be for both sides, because “when a restricted free agent signs a contract after the NHL season has already begun, their cap hit for the first year is greater than the contracts annual average, and similarly the cap hit of the remaining years is less than that of the annual average.”

In other words, Toronto could sign Nylander to a deal that carries a higher cap hit in year 1 – when they have an abundance of space – but a reduced cap hit in years 2+, when Matthews and Marner will be due new deals of their own and Jake Gardiner will also need a new contract. And that’s not event taking into account any future tinkering on defence.

Maybe this was the unspoken plan all along?

Barring complete disaster, this team is a lock for the playoffs, and can make due without Nylander for a bit. But he needs to be in the lineup at some point to maximize the offence and reduce risk on the back end, and this collective bargaining quirk might be the ticket to getting Nylander closer to the deal he wants and keep the Leafs out of salary cap hell moving forward.

When he’s back, look for the ice to be tilted even further in Toronto’s favour, just as it’s supposed to be.