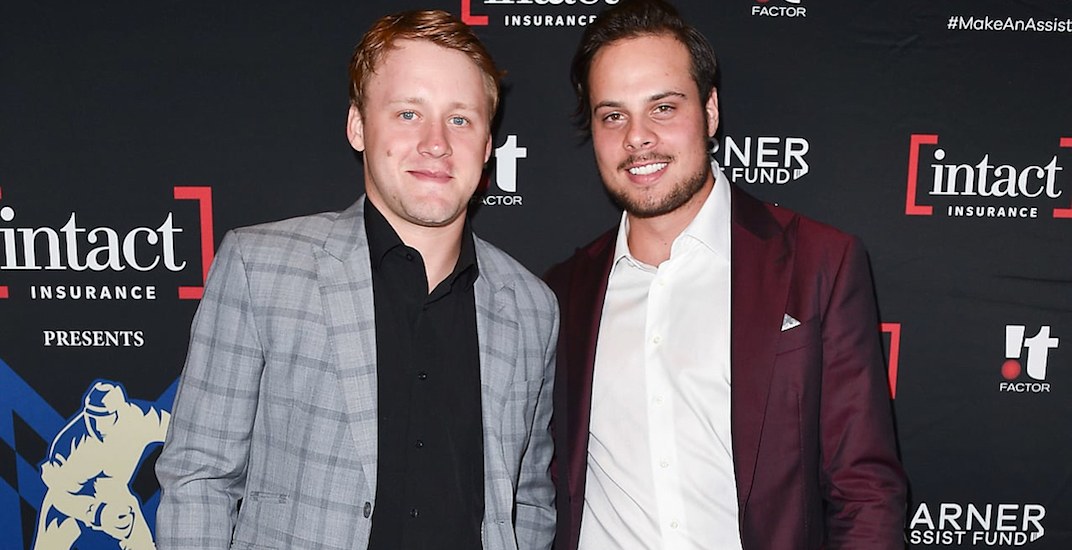 With the signing of John Tavares, it was an off-season of buzz and excitement for Maple Leafs fans.

Now that the season is here, let’s take a step back to find all the players you should be following on Instagram.

Great night of tennis! Thanks for having me @rogerscup

Formula One, the US Open, Rogers Cup; you name the event, Fredrik Andersen’s been there and documented it on his Instagram this summer.

Most players like showcasing their off-ice activities on social media, but not Garret Sparks.

Have had too much fun this year chasing down the Hap with @calvinpickard. Who else would feed me one timers in warmups and make me go wild on the bench for big saves & nice touches? Great regular season from the heaviest tandem in the league, excited to keep it going with you!!

Sparks is all about posting aesthetic shots of him tending goal. We’ll keep our eyes open for bigger and better pics now that he’s up with the big club.

You know how they say that a picture is worth a thousand words?

After overwhelming support for my new corn rows, I have decided to add not only the corn rows to my permanent wardrobe, but also this new speedo.

Travis Dermott’s posts provide that and then some with photos and captions that show off his quirky sense of humour.

His more recent posts might look clean and professional, but scroll down a bit further and you’ll earn more than your fair share of laughs checking out Jake Gardiner’s page, as he goes shopping with Morgan Rielly.

This is what happens when I take @morganrielly grocery shopping #workethic

Morgan Rielly’s Instagram does a great job of capturing his personality.

He’s quick to show off his well-developed sense of humour, selfless work in the community and offseason activities with friends.

Twenty-six-year-old defenceman Justin Holl comes to the Leafs as an AHL champion.

Leafs fans will be hoping Holl can replicate that photo next summer – hopefully with the Stanley Cup this time around.

There’s no other way to say it – Mitch Marner’s Instagram is a goldmine of humour and personality.

No days off for me. @intact_insurance summer internship here I come #IntactMM16 #ad

With the infamously strict Lou Lamoriello out as GM, we can only imagine what Marner’s got in store for his followers with more freedom.

Mitch Marner’s not the only Leaf taking advantage of the newfound freedom – William Nylander’s taken the opportunity to grow out both his hair and beard.

On the other side of the spectrum, you’ve got Zach Hyman, who’s about the most modest and wholesome player you’ll see on social media.

Had an amazing time reading my book to kids @mlselaunchpad and talking about the importance of reading, writing, and believing in yourself!

Whether it’s storytelling, setting up charity golf tournaments, or working on children’s books, Hyman’s always doing something for others with a smile on his face. Show him some love by stopping by his account.

Some are quick to adapt to the NHL lifestyle as adults, while others take more time to grow. If we’re to take Kasperi Kapanen’s Instagram as proof of his maturity, we’re probably looking at someone who falls into the latter.

Regardless, Kapanen’s account is the place to be if you’re in search of a fun loving dude.

Another training camp and preseason in the books. Looking forward to big things from our group @mapleleafs

Instead of posting personal photos such as those from his summer wedding, Kadri’s more or less stuck to Leaf related photos. It’s pretty monotonous, but a genuinely nice change of pace from the playful content coming from some of the youngsters.

Auston Matthews might be the leader on the ice, but he’s slacking compared to some of his teammates off of it with his social media game.

Best Mom in the world ! Happy Mother’s Day. Thank you for supporting me in everything I do. I love you !

It’s pretty impressive to think of all the followers Matthews has accumulated despite refraining from posting anything that draws attention.

Everyone’s heard of Josh Leivo’s improved condition, though we shouldn’t be too surprised given what one might have seen earlier on his Instagram.

Offseason signing Par Lindholm seems to be loving his first taste of Canada.

Things look optimistic for now, but just wait until the torrential downpour begins.

If you didn’t know he was a hockey player, you might just mistake Andreas Johnsson for a male model.

Johnsson’s other photos show off his personality too, so he’s certainly with your time.

Connor Brown doesn’t post much on Instagram nowadays, but chances are you’ll be greeted with a gem when he does get something up.

Hold the phone she's got a cannon!

It’s mind-boggling to think that Frederik Gauthier has less than 2,000 Instagram followers despite being an NHL player, a regular Instagram user and having a dog that melts hearts. Make things right by dropping him a follow.