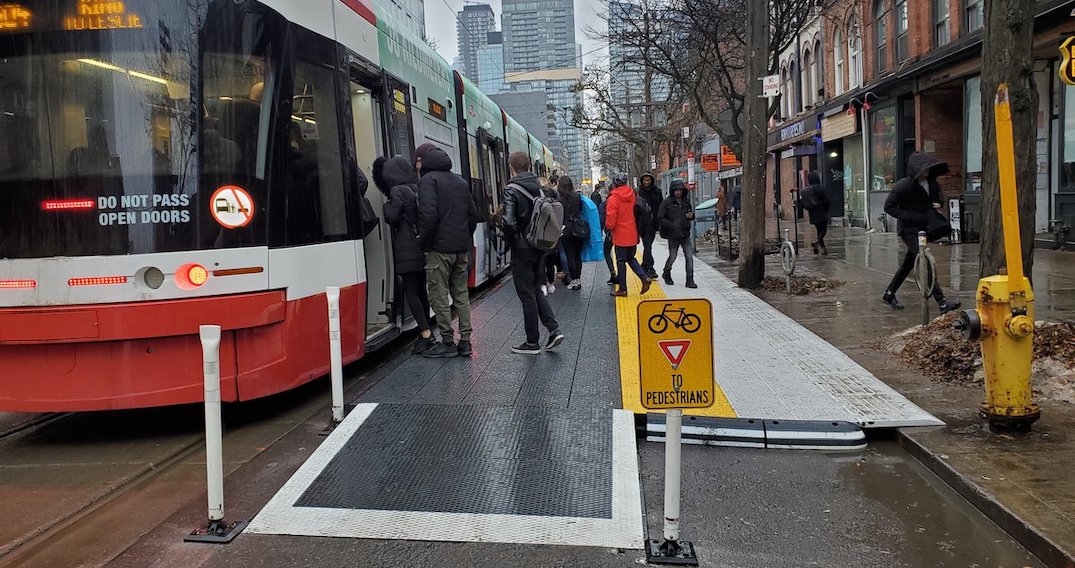 To further make King Street accessible for everyone, the city has installed raised transit stop platforms along the busy downtown street.

The new raised platforms provide transit riders with a dedicated space to safely board streetcars from the curb, in addition to creating more waiting and boarding space for customers and freeing up more sidewalk space for pedestrians.

Located at King and Portland — and soon to be King and Peter — the raised transit stop platforms also feature an integrated cycling track and ramp, allowing cyclists to pass through the intersection without having to ride over the streetcar tracks.

According to the city, the new platforms provide “an enhanced user experience,” by improving accessibility, eliminating drainage/pooling issues in the waiting zone, and clearly marking zones for cyclists and pedestrians.

The new raised streetcar boarding platform at King/Portland is now complete. Pedestrians should stay behind the yellow line until a streetcar has arrived, cyclists should ride slowly and yield to pedestrians using the platform. #CityofTO #BikeTO pic.twitter.com/iQBthdiO3H

The platforms are being tested at these two locations over the winter season to assess their durability and performance and obtain user feedback.

The city added these two locations were chosen because they don’t conflict with utilities or any impending development and/or construction projects.

With the King and Portland platforms officially in place, the city is advising transit users to remain in the white zone behind the yellow tactile strips until a streetcar has arrived at the platform.

Additionally, cyclists should yield to pedestrians when entering and exiting the streetcar.

Though King Street represents the first time these platforms are being built in a Canadian urban centre, they have been implemented across the US including New York City, Pittsburgh, Chicago, and Baltimore, according to the city.