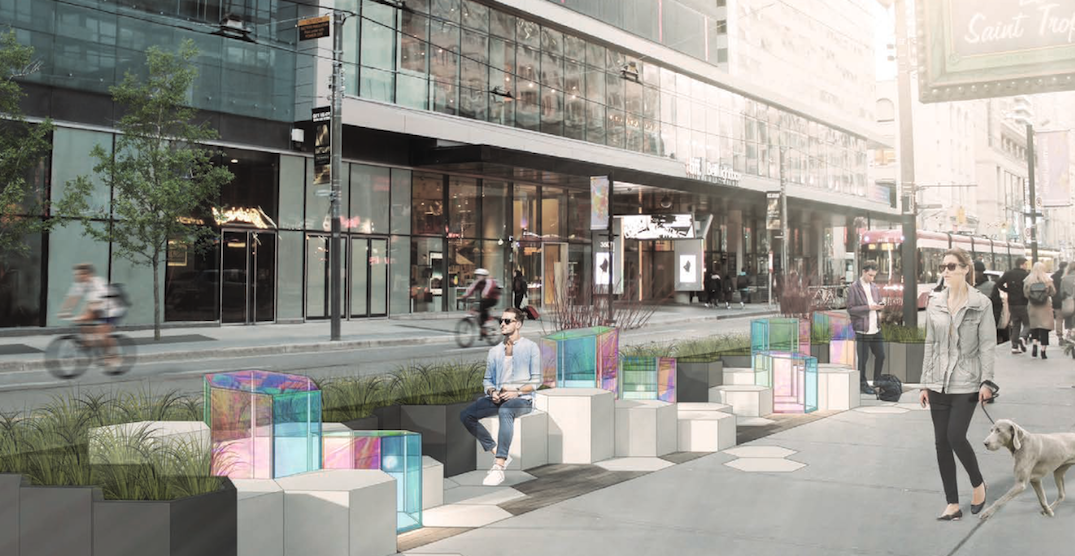 After images of the new crates along King Street West popped up on social media, the City of Toronto has announced the rollout of its public spaces and patios along the Transit Pilot corridor.

On Thursday, the City of Toronto officially announced the winners of the Everyone is King: Design Build Competition.

Almost 30 activations will be installed along King Street between Bathurst and Jarvis Streets to add to the vibrancy of the street, says the city. The rollout of these installations has begun and most will be completed by the end of May, weather permitting.

“This is another sign that King Street is open for business and ready for summer,” said Mayor John Tory. “I encourage all Toronto residents and visitors to come down to King Street to see these public spaces, enjoy the patios, and support local businesses.”

The first winning project to be installed was a parklet called Face to Face/Tête à Tête on the north side of King Street East between Victoria and Toronto Streets. It’s the first of two destination parklets to be installed.

The second parklet, called King Street Causeway, will be installed on May 3, weather permitting, in the west end of the King Street Transit Pilot area in the Entertainment District.

A number of public space activations will also roll out this month.

Everyone is (a) Kid has been installed adjacent to David Pecaut Square, and Watch Your Step!, Woggle Jungle, and King’s Buried Treasure will all follow.

As well, the city said that there will be various business-operated outdoor café spaces and public seating areas – up to 16 cafe patios and three business operated public installations will be installed.

The full list of winners and where installations will be located can be found on the City of Toronto’s website.