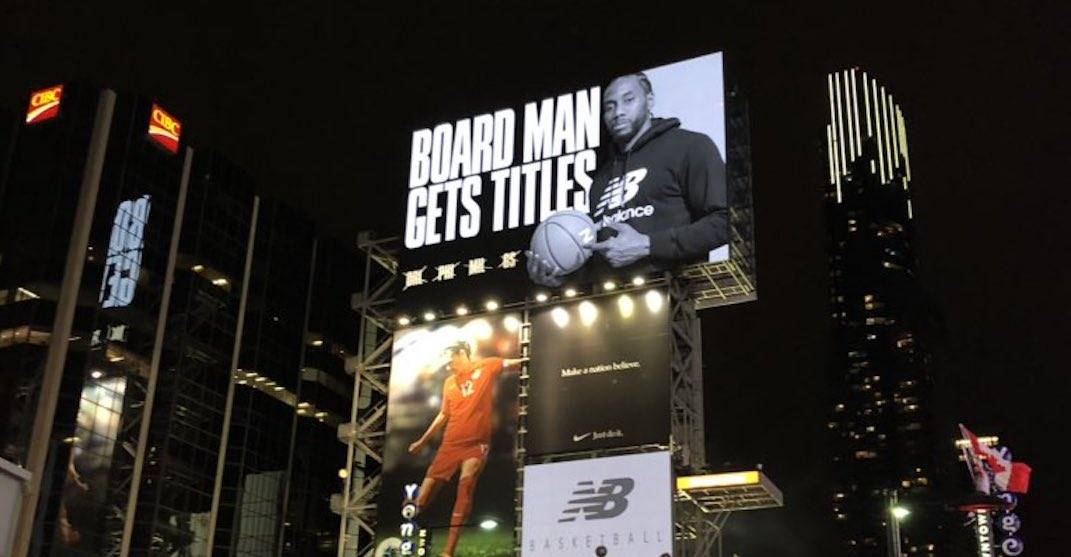 It was a celebration unlike any other in Toronto on Thursday night, and at the centre of it all was the Raptors’ Kawhi Leonard.

The Finals MVP’s performance over the season helped Toronto gain its first-ever NBA championship, and with it, the arrival of a new billboard at Yonge-Dundas Square.

Following its hilarious “Fun Guy” billboard during the Eastern Conference Finals, and “The King of The North is Coming” billboard in Oakland trolling Warriors fans, New Balance revealed a brand new “Board Man Gets Titles” billboard in Toronto last night.

As well, New Balance will be dropping some limited-edition tees with Kawhi’s new “signature tagline.”

BOARD MAN GETS TITLES!! #wethenorth pic.twitter.com/IKpp9L9V1v

According to New Balance, Leonard and his former teammates first started saying “board man gets paid” in high school and college to motivate each other to make it to the professional league.

“It’s about working hard, outworking an opponent. Rebounds help win you games, big rebounds, offensive rebounds, limiting the team to one shot,” said Leonard during a press conference when asked to confirm the statement.

Board man gets titles. Kawhi Leonard has just led the @Raptors to their first NBA championship. @NewBalanceCan @newbalance