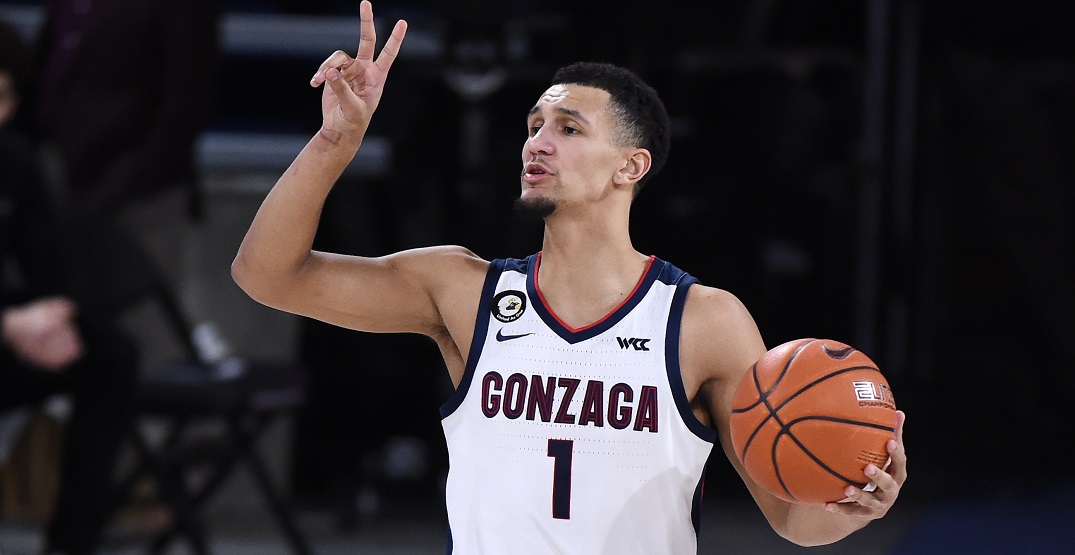 After a season with little to cheer about, the Toronto Raptors are in search of star power wherever they can get it.  Enter Gonzaga Bulldogs guard and top draft prospect Jalen Suggs.

With the Raptors holding the fourth overall selection in this year’s draft, there should be no shortage of future NBA stars they can pick from.

NBA greats come in many shapes and sizes these days, but one thing defines the NBA’s best across any era: their ability to score the big shot in the game’s closing moments.

In overtime of last year’s Final Four semi-final matchup for Suggs’ Gonzaga against UCLA, 3.3 seconds remained with a 90-90 score flashing on the screen.

The scene of Suggs’s shot is one that’s been played out on playgrounds across the world since basketball was invented: With no timeouts, Gonzaga had to go the length of the floor to win it.

Suggs threw up a heave as the clock was expiring from well beyond the three-point arc, and produced a highlight for the ages as the ball banked off the backboard to send his Bulldogs to the NCAA championship game.

Even though top-ranked Gonzaga hadn’t lost a game all year up to that point, everyone watching Suggs launch a Hail Mary shot on the run couldn’t believe it went in. 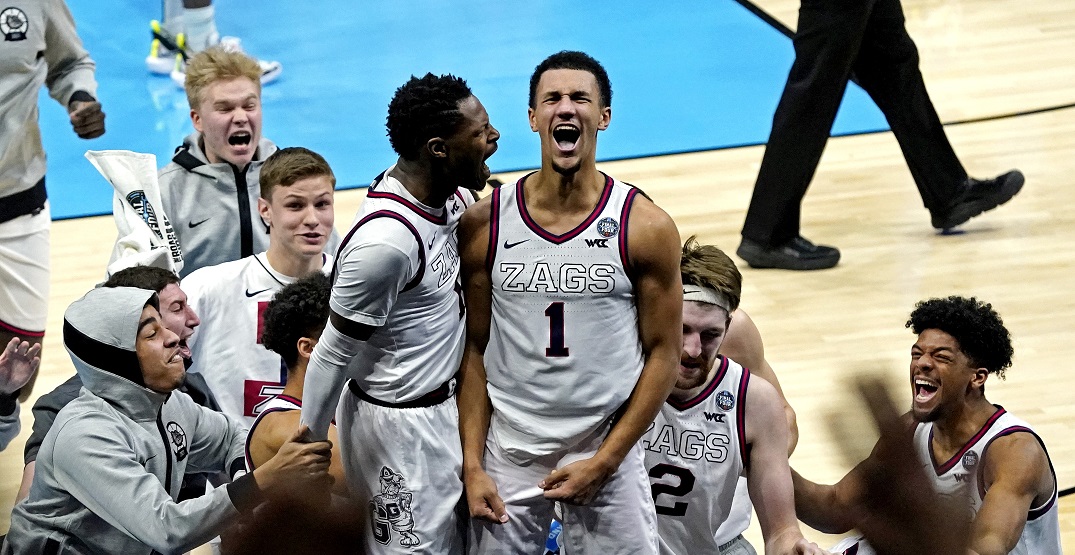 Johnson said he first saw Suggs playing at an elementary school tournament in “first or second grade” and was immediately drawn to his shooting ability.

“He was just way ahead of everybody,” Johnson said to Daily Hive. “He was shooting three-pointers at that time.”

Suggs won three 2A state championships in high school, with a chance for a fourth cut short by the COVID-19 pandemic.

In his senior season at Minnehaha, Suggs averaged 23.3 points, 7.5 rebounds, five assists and 3.9 steals per game. Suggs earned all the honours you’d expect from his high school career, being named a McDonalds All-American and being awarded Minnesota “Mr. Basketball” as the top player in the state.

In his one year at Gonzaga, Suggs was among the leaders of a Bulldogs team team that ended up going 31-1, with their only loss being in the national championship game against Baylor. Suggs put up 22 points in the game, tied for a game-high among both teams.

Suggs was named to the all-tournament team, and finished with averages of 14.4 points, 5.3 rebounds, 4.5 assists, and 1.9 steals per game in his freshman season.

Johnson can see Suggs making an instant NBA impact, whether it’s with Toronto or elsewhere.

“He’s going to be an instant part of a rotation somewhere,” he said. “I think he’s got an NBA-ready body, and he has the advantage of being able to guard several positions.”

If the Raptors do select him, Suggs could come in as a successor to point guard Kyle Lowry, who remains unsigned for next season.

Off the court, Johnson sees Suggs’ potential as a face-of-the-franchise type player.

“He’s going to be a marketing magnet for somebody, just because of his charisma,” Johnson said.

“We’re super proud of the way that he projects himself,” Johnson added. “But there was absolutely no surprise, because he’s been like that since he was a youngster.”

But despite his accomplishments, it wasn’t even a guarantee he’d continue playing basketball at the collegiate level.

A two-sport athlete, Suggs also won the Minnesota “Mr. Football” award in 2019, serving as the quarterback for the SMB Wolfpack, a football team comprised of Minnehaha and three other area private schools.

SMB won the class 4A state title in 2018 with Suggs behind center, and his QB talents saw him draw scholarship offers from schools such as Ohio State and Nebraska.

“I think up until the last minute, he was still considering football,” Johnson said. “Obviously, he made the right decision.”

Suggs isn’t the only eventual college star that Johnson coached at Minnehaha, however.

Chet Holmgren, who won this past year’s Naismith Player of the Year as the top high school basketball player in the country and was ranked number one player in the 2021 recruiting class, featured alongside Suggs on the school’s team. The duo earned national recognition, including being featured on ESPN for a number of nationally televised games.

“This is an incredible opportunity and privilege to basically be on a national spotlight,” Johnson said.

Holmgren is set to follow in Suggs’ footsteps, playing for Gonzaga this upcoming year.

A crowd of around 17,300 came to one of Suggs’ and Holmgren’s games being held at Minnesota’s Target Center against California school Sierra Canyon, featuring Lebron James Jr. and Zaire Wade, son of NBA legend Dwyane.

“When we walked out on the floor, it was like, oh my Lord, this is, this is amazing,” Johnson said.

Johnson believes opportunities like that helped prepare Suggs for competing at the next level.

“As soon as the game starts, you’d have to kind of block that out,” Johnson said. “But after you’d be pinching yourself and asking if it was a dream.”

For Johnson, he’s relished the experience he’s had coaching star players over the last several seasons. But as the NBA draft and an upcoming pro career approaches, Johnson said he’s taking the hands-off approach with Suggs after a reunion this past spring.

“He worked out here every day in May so that was fun to reconnect with him there,” Johnson said. “But I do not want him to feel as though, you know, he needs to contact me or keep in touch with me. At this point I’m sure he’s getting 100 texts every day, so I’m just gonna leave him alone for now.”