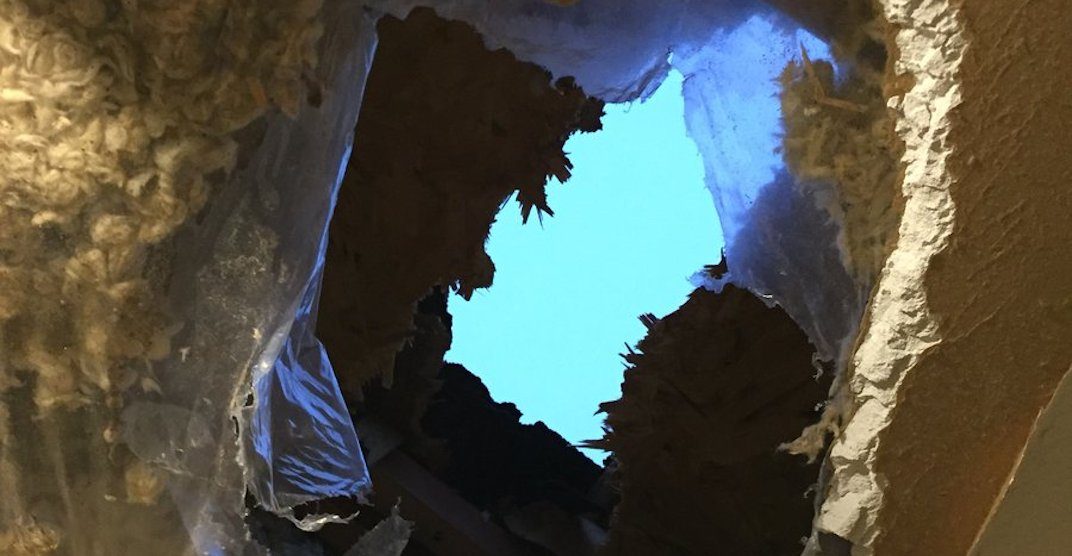 A woman is lucky to be unhurt after a huge chunk of ice crashed through the ceiling of her Mississauga home, narrowly missing where she was sleeping.

The couple’s son Daniel tweeted a photo of damage to the roof caused by the falling ice on Wednesday, saying he believes it came from a passing airplane.

Piece of ice from a plane crashed into my parents Mississauga home this morning. 2 meters away from my parents bed where my mother was. Thank God no one was hurt. But if someone was, who would be responsible? @MissiNewsRoom @CP24 @CityNews pic.twitter.com/wsbSdsOG70

Daniel says the huge chunk of ice landed two-metres away from his parent’s bed, where his mother was sleeping at the time.

“Thank god no one was hurt. But if someone was, who would be responsible?” he tweeted.

From the photo Daniel shared on Twitter you can see that the chunk of ice has caused a great deal of damage to the ceiling.

Maria Ganogiannis, a spokesperson from the Greater Toronto Airports Authority (GTAA) told Daily Hive GTAA is sorry to hear about the ice damaging the Mississauga home and they hope the residents are okay.

“investigations on reported aircraft incidents are carried out by Transport Canada. We would, of course, support Transport Canada as required and in this instance have already reached out to offer our assistance should it be required,” said Ganogiannis.