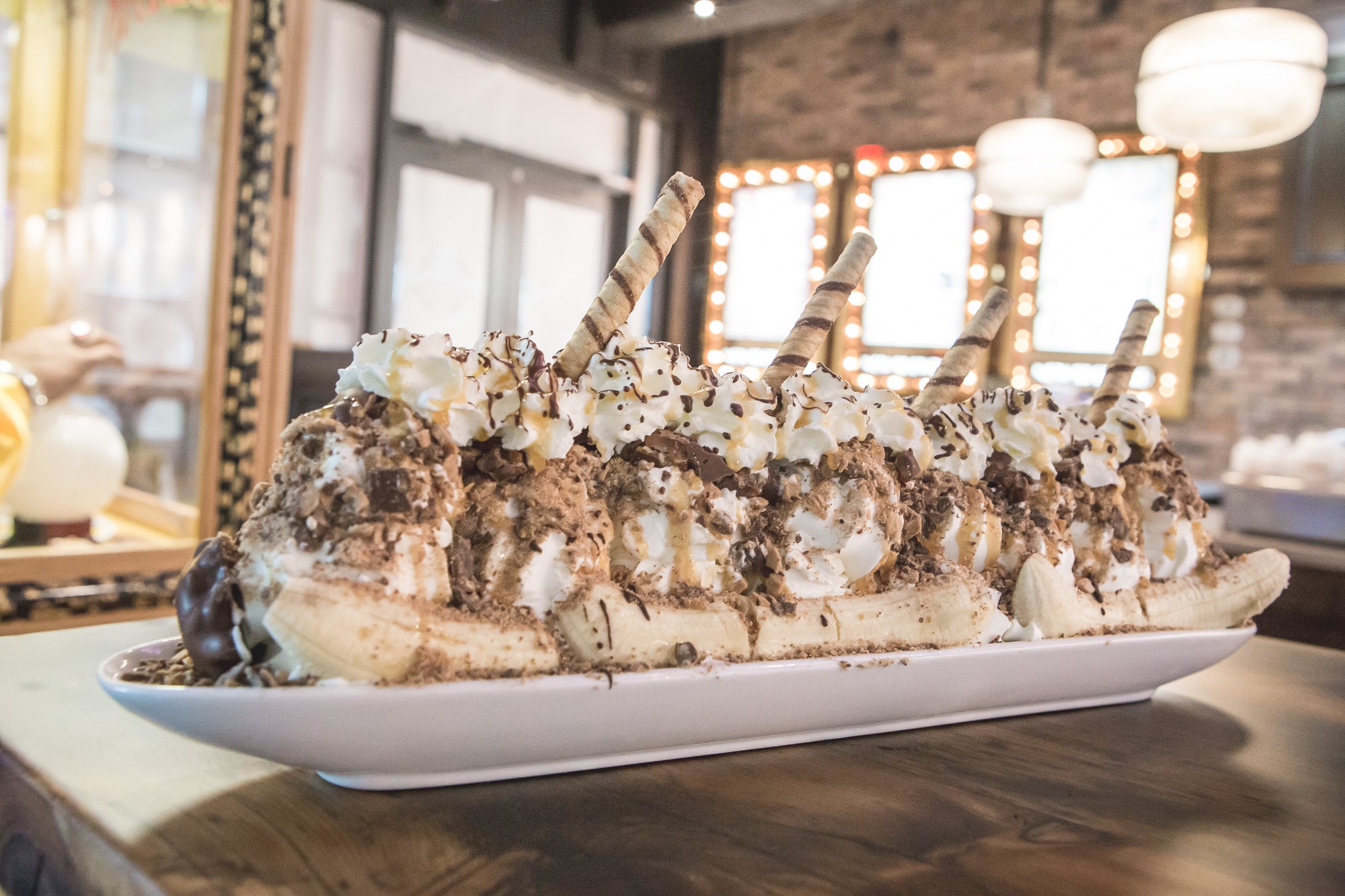 Hollywood Cone originates from east of The 6ix, the food truck-turned-chain of epic ice cream parlours already operates two locations in Oshawa and has an additional location in the works in Whitby. 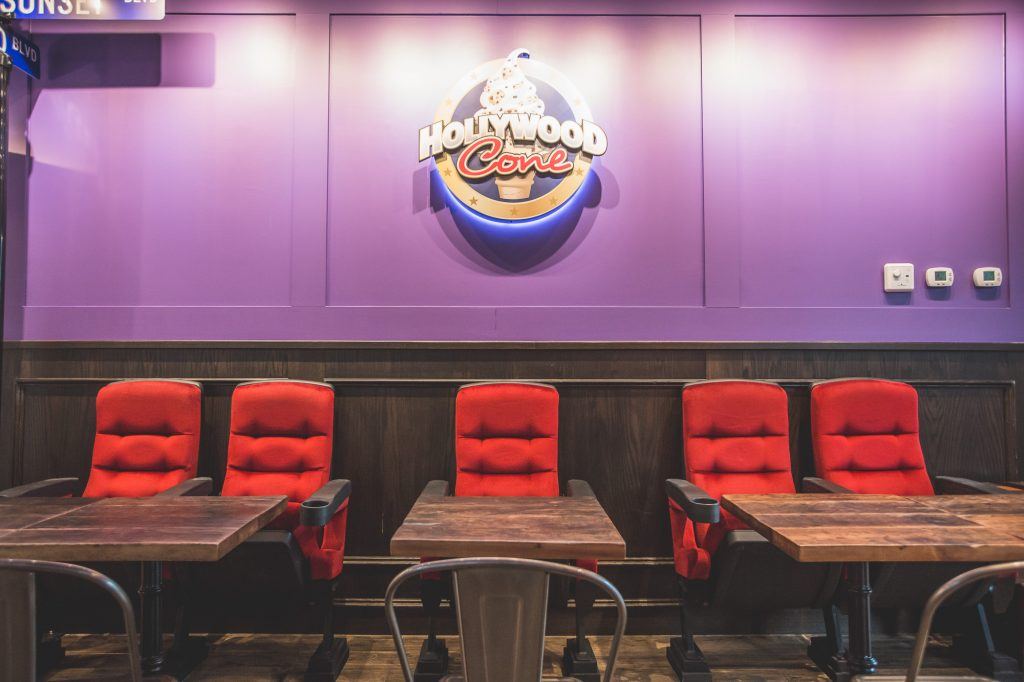 While extreme ice cream has become de rigueur at cafes and restaurants across Toronto, Hollywood Cone was amongst the first to ignite the trend in Ontario. Now it’s landed itself a plum spot on West Queen West and is dishing out made-for-Instagram creations.

Like the original, the newest ice cream parlour really plays into the Tinseltown theme. The place is outfitted with red carpets, velvet movie theatre seats, and a step and repeat wall – because you know you’re going to want to take a photo. 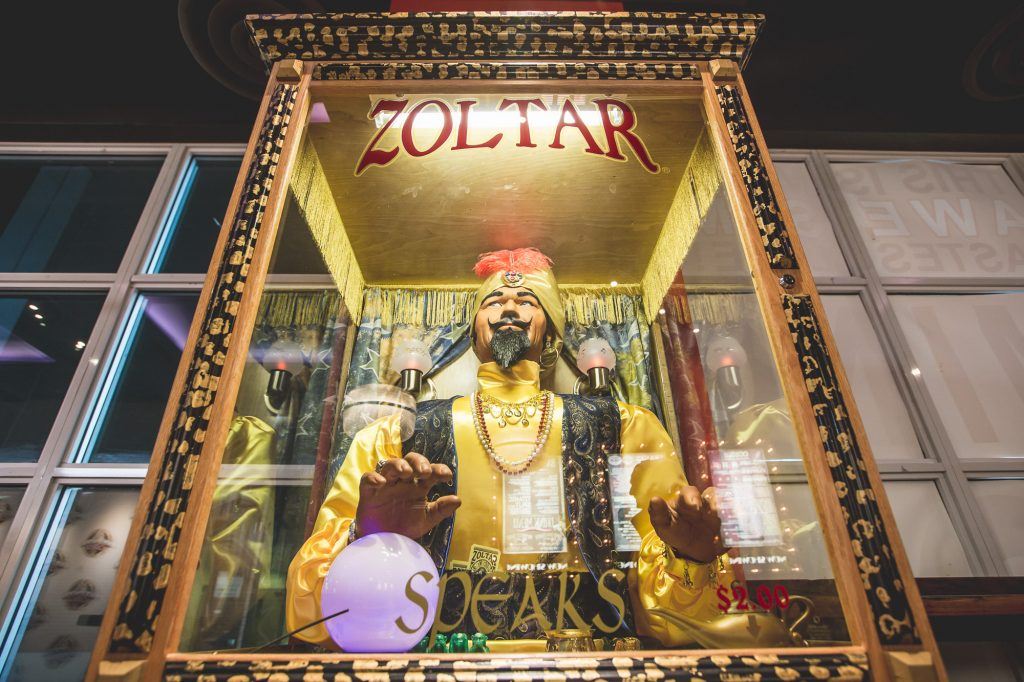 There’s even a Zoltar fortune telling machine just like in the movie BIG… because you know, you’re about to consume an obscene amount of ice cream–maybe it’s time to start soliciting advice on your future? Even if it comes from an animatronic oracle. 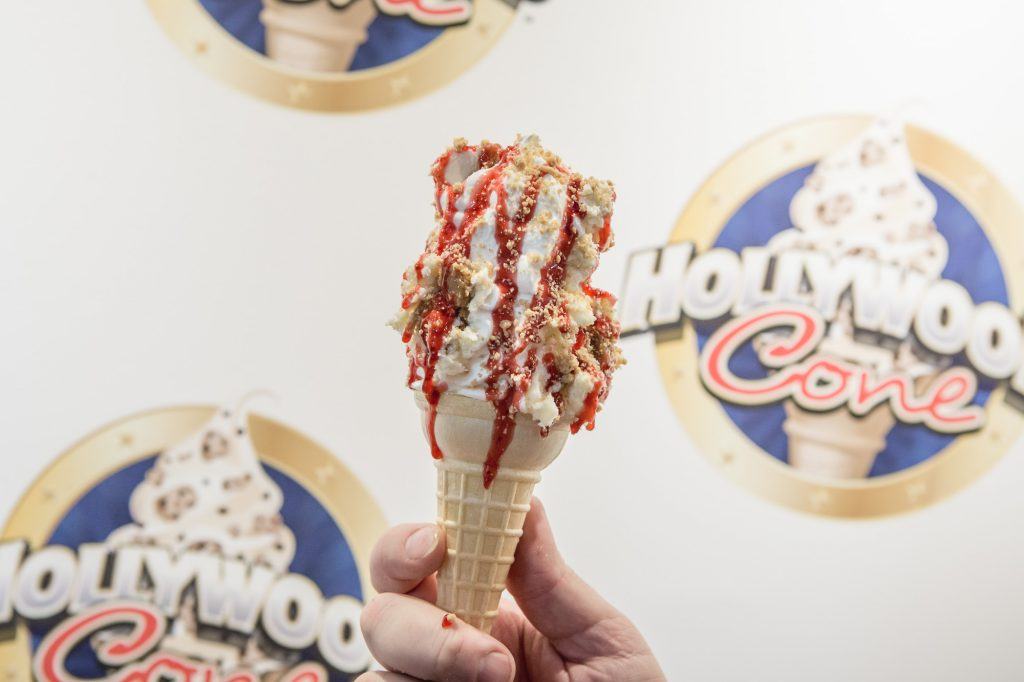 The menu, lit up with marquee lights, lists two dozen different cones featuring vanilla, chocolate or twisted soft serve, in flavours like the Night at the Movies decorated with caramel corn, and the Strawberry Shortcake finished with strawberry sauce and vanilla cake crumble. 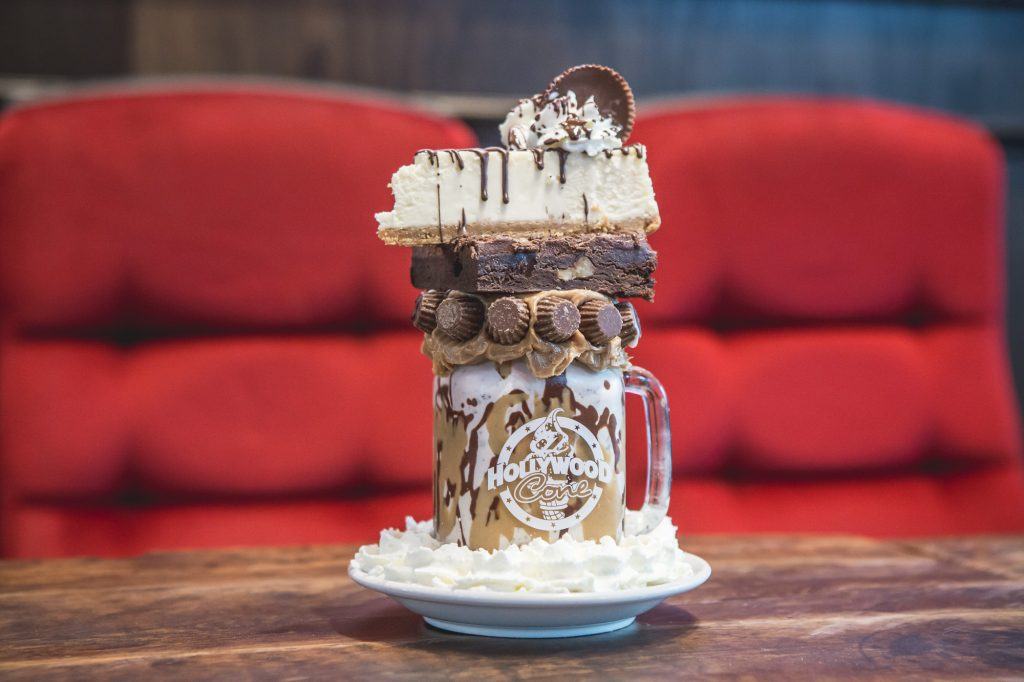 Stealing the spotlight are the signature mutant shakes; thick handspun shakes in flavours like the Chief Wiggum, a coffee milkshake topped up with two pink sprinkled doughnuts, and the Funnel Cake Shake dressed with a scribble of deep fried batter topped with a scoop of ice cream and strawberry sauce. 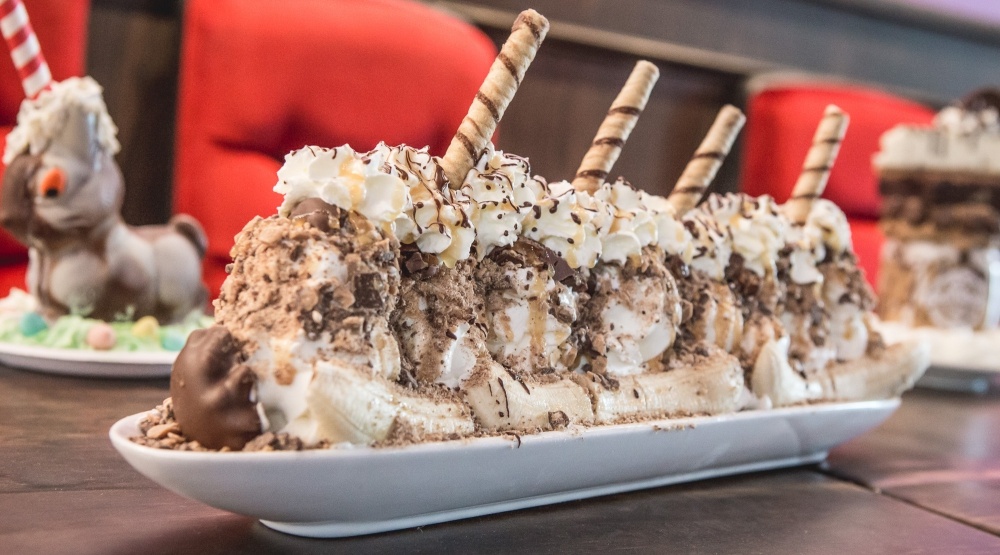 The Titanic Split is new for this location. The epic 18″ banana split is a beast boasting multiple bananas, ice cream, chocolate and caramel drizzles, whipped cream, Pirouline hazelnut wafers, Skor bits, and Turtles. At $25, I think its safe to assume its meant to be shared. 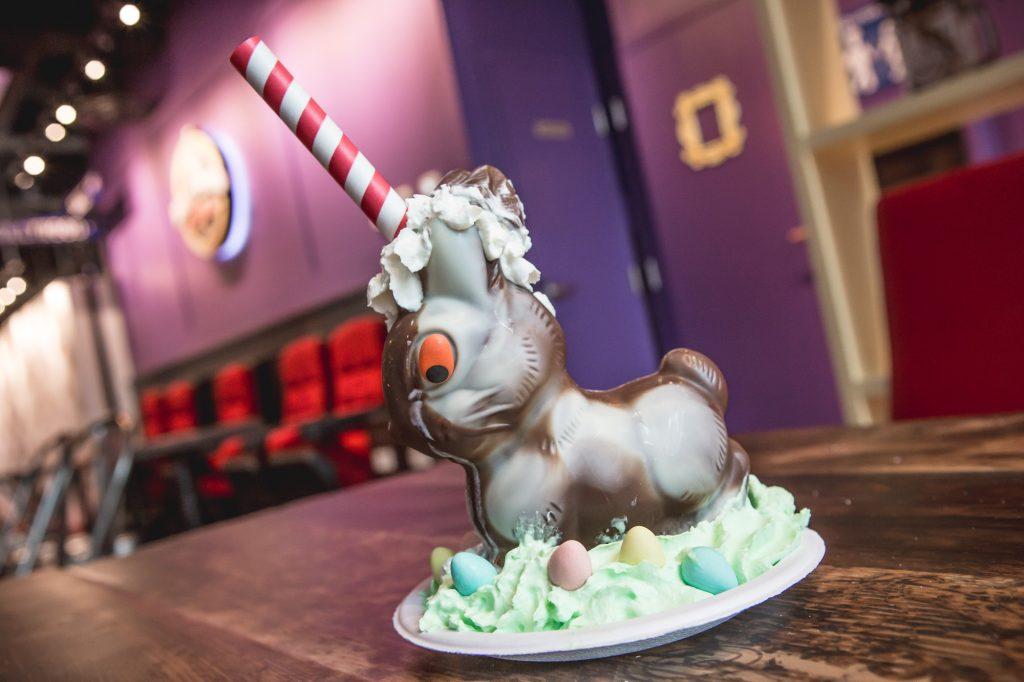 Seasonal creations should be expected as well. In time for Easter, there’s the SomeBunny To Love, a hollow choco-bunny filled with Cadbury mini egg milkshake and propped up with green whipped cream. 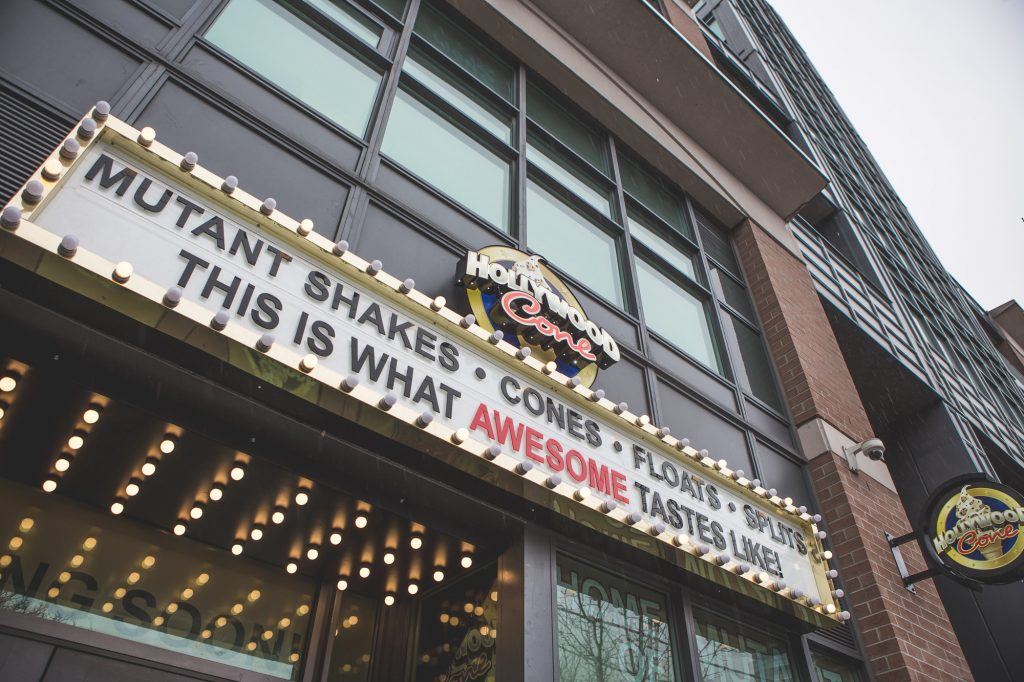 Now that Hollywood Cone is downtown, there’s no need for ice cream loving Torontonians to drive east or chase the food truck this summer. Add this new spot to your summer bucket list and prepare for some seriously drool-inducing desserts.