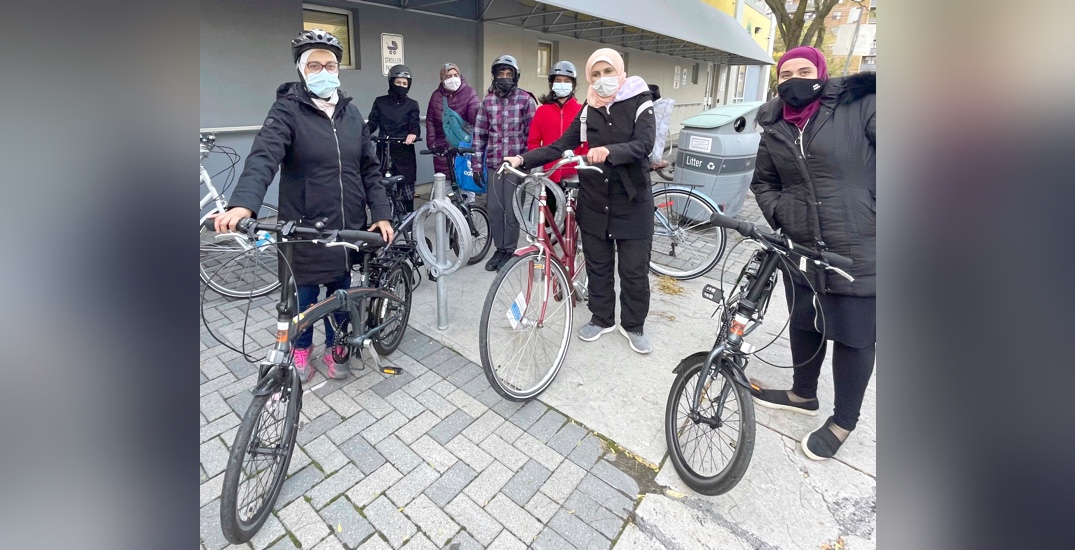 Being a newcomer to Toronto can be a frightening experience, but there’s a cycling program to help make things a little easier for Muslim women.

Hijabs and Helmets was launched in 2019 after an Access Alliance programmer noticed a lack of women wearing hijabs cycling in the city. Now, they’re flipping the script of what a stereotypical cyclist in Toronto looks like.

“This shouldn’t be something that’s so rare, this should become a normal part of Toronto’s cycling scene,” said Fei Tang, a manager at Access Alliance who came up with the idea for Hijabs and Helmets.

Hijabs and Helmets is run by Scarborough Cycles which operates under Access Alliance. Access Alliance is a health and community hub that addresses systemic issues faced by refugees and other newcomers to Canada.

The goal is to help build a community for newcomers, promote physical activity, and help people get around their new city. While they hope to be able to offer weekly group rides this summer, they offer extended sessions at various times throughout the year.

The program is open to all skill levels. They’ve recently received funding to purchase accessible bicycles so newcomers with disabilities can join the rides, too.

“We are fully prepared to teach them. We’re fully equipped and skilled, and we have all of the resources available to teach non-riders to get them rolling,” Marvin Macaraig, a health promoter and the coordinator of the Scarborough Cycles program, told Daily Hive.

He said that some people who’ve joined the rides with no prior cycling experience have then been able to ride their bike with their kids, or use it to commute to work, or get groceries. This has providing some independence, freedom of movement, and the ability to save the cost of the public transit while trying to figure out the city.

Most people who join the program have been in Canada for less than five years. Not only does this program allow people to learn a new activity, but it also helps build a sense of community.

And it’s not just cycling, there are nature walks and workshops, too.

“They get to have new friends, they get connected to new participants, they have new friendships from this program,” Maha Mohamed, a settlement program worker at Access Alliance, told Daily Hive.

And these friendships are long-lasting. Macaraig said that many participants will come back for group rides, they’ll bring their friends or their family, and they’ll tell their neighbours to join in.

It’s not just people who live in the city’s east end; Macaraig said that there are people joining the ride from all parts of the city. It’s not exclusively for people who’ve recently moved from Muslim countries, either. They welcome anyone who wants to join the ride regardless of gender or creed.

“Even though the program is called Hijabs and Helmets, it’s actually all walks of people riding bikes together, including Hijabis,” said Tang.

It gives people a chance to explore the city, too. Macaraig takes riders on trails and pathways and shows them how far they can ride along it. It might surprise more experienced riders just how many things connect to the Taylor Creek trail. Whether you want to hit Evergreen Brickworks or the Toronto Botanical Gardens, or even the beach, you can get there from Taylor Creek.

The next Hijabs and Helmets program begins on Tuesday. It will kick off with a nature walk, which includes snacks and a hot beverage!

Access Alliance hopes that the Hijabs and Helmets doesn’t start and end with cycling. Tang said helmets could apply to the skating rink, construction work, or really anywhere.

“We want to promote diversity and try to make our society more and more welcoming to immigrants from all walks of life,” she said.

While the cycling community has been welcoming, and they even sometimes receive cheers and applause as they go, Mohamed hopes one day they’ll go unnoticed.

“As the group grows bigger and we are more and more visible,” she said. “And in the end the goal is no one will pay attention to us anymore, like it’s just part of your daily, normal life.”