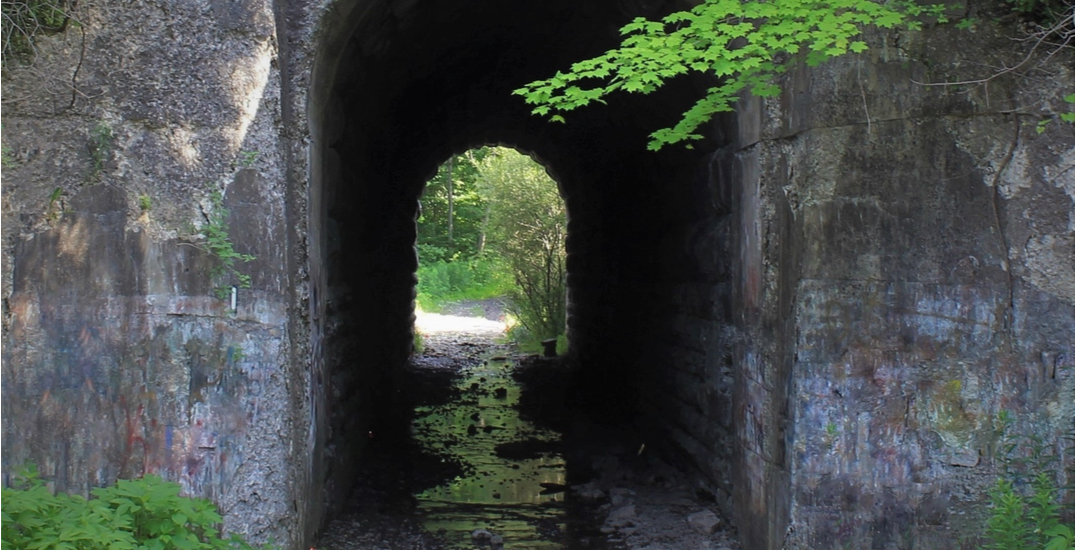 There are two haunted tunnels near Toronto that you can actually visit and (if you dare) try to summon your own ghost.

Both tunnels have a tragic history that lends to their ghost stories. If you’re in the mood for some urban lore and possible hauntings, hop in the car and head to Niagara Falls for a night of paranormal fun.

The Screaming Tunnel is located on Warner Road in Niagara Falls, and it is said to be haunted by the ghost of a young girl.

The tunnel runs below the Grand Trunk railroad tracks. It was originally meant as a passageway for floodwaters to pass under the tracks. It got a ghostly look early on as moss and algae made themselves home on the limestone rock the tunnel was made from.

So, more about the ghost that allegedly haunts the tunnel. The haunting is said to be a young girl who burnt to death. How exactly she burnt to death is up for debate. The original tale said that she lived at a nearby farm that caught fire, and she ran, alight, through the tunnel before dying.

Other tales are a bit more grim. One version says her father burnt her alive in the tunnel in a fit of rage. Yet another says that the young girl was raped in the tunnel and burnt to death by her rapist.

Regardless of which story you choose to believe, the girl’s ghost is said to haunt the tunnel to this day.

Legend has it that if you light a wooden match in the middle of the tunnel, you can hear the girl’s scream, and a gust of wind will blow out the match. Some might say it’s a passing train on the tracks above, but I’ll let you decide for yourself.

If you don’t want to make the drive out to Niagara Falls to see the tunnel, just turn on the 1983 flick The Dead Zone based on the Stephen King novel of the same name. You can watch Christopher Walken’s character examine a dead body in the Scream Tunnel.

The tunnel also leads to the Bruce Trail if you fancy a nice hike after ghost hunting.

This tunnel was abandoned some 100 years ago and is only frequented by those who want to get in touch with their paranormal side.

Located just a 10-minute drive from the Screaming Tunnel, Blue Ghost Tunnel (aka Merritton Tunnel) was constructed nearly 150 years ago and closed in 1915. Now, parts of it sit flooded as it ran under the Wellington Canal. Only the entrance can be accessed, and unless you have SCUBA gear, you won’t be able to make it to the exit some 700 feet away.

So, who is haunting this abandoned tunnel? Well, legend has it that the ghosts of a train crash have taken up residence in the tunnel.

According to Ghost Walks, in 1903, two trains crashed on the line killing a fireman on the train instantly. Legend has it that there were several deaths during the construction of the tunnel. There is also allegedly a ghost dog that is rumoured to haunt the tunnel.

One Ghost Walks guide said that he thought he saw a dog at the end of the tunnel, only to run towards it and find nothing except a flash of lightning. He’s not entirely sure that the tunnel is haunted, but that it is certainly creepy.

The abandoned tunnel is a bit more challenging to get to. You’ll have to walk about 1.5 km from the road. Once inside, there’s apparently a constant dripping sound, and the floors are typically wet and muddy from the sinking porting of the tunnel.

Be careful while you’re out; Wellington Canal’s security patrols the area, and if you stray too far, they may ask you to leave.