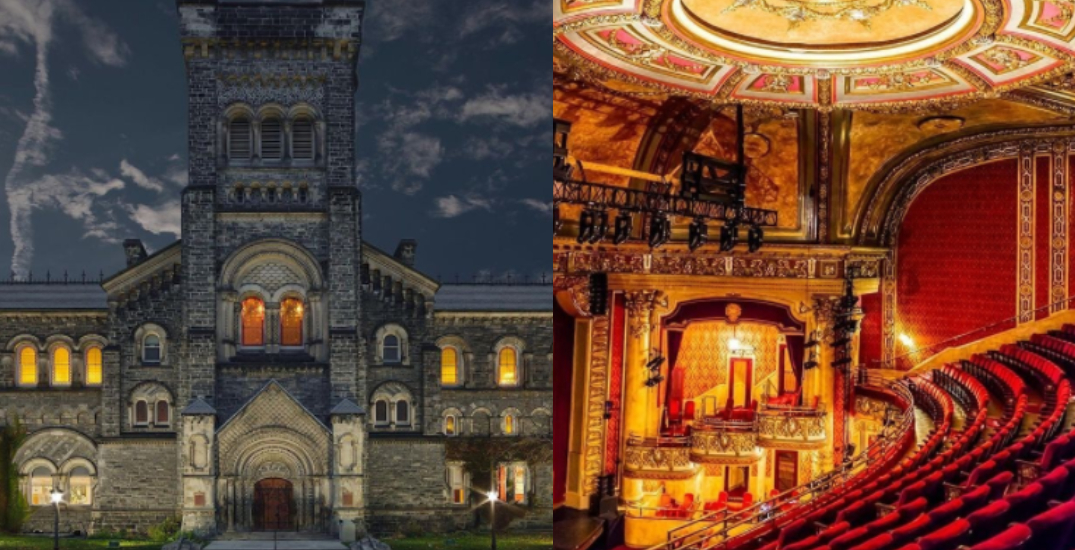 Beyond the ornate exterior of Toronto’s oldest buildings lie grisly tales of torture, murder, and betrayal.

From hanged maids to angry soldiers to faceless nuns, the city is crawling with ghosts. They’re found in restaurants, in theatres, and on university campuses.

With Halloween just weeks away, what better time to explore some of Toronto’s spookiest sites?

Below, check out 10 of the most haunted spots in the city — if you’re brave enough.

Now a bustling restaurant, this stately Jarvis Street manor was once the private home of industrialist Hart Massey and his family.

According to Ghost Walks, following the death of Massey’s daughter, a distraught maid hung herself over the grand staircase. Over the years, numerous guests and staff have allegedly seen the maid’s body dangling over the stairs.

Guests have also reportedly seen ghostly children playing throughout the restaurant, and the second-floor washroom is said to be haunted as well.

Opened in 1913, the Elgin and Winter Garden are the last operating double-decker Edwardian theatres in the world. They’re also, apparently, full of ghosts.

Apparitions include a disembodied trombone player and the Lavender Lady, whose presence ushers in her namesake scent and a cold breeze.

St. Michael’s Hospital was established by the Sisters of St. Joseph in 1892, and one nun is still reportedly making her rounds to this day. Albeit, faceless.

According to Toronto Ghosts, Sister Vincenza roams the halls of Ward 7B, turning lights on and off, bringing patients blankets, and, sometimes, ushering them out of this world.

There is also said to be a spirit in the back filing room of the hospital’s medical records office.

Mackenzie House has been called the most haunted house in Toronto. Once home to the city’s first mayor, it now houses his ghost.

William Lyon Mackenzie died in his namesake house, and has reportedly been seen lingering in his former bedroom, Toronto Ghosts writes.

A woman’s ghost has also been seen roaming the hallways, phantom footsteps have been heard, and a basement printing press is said to start up on its own.

The underground tunnels that connect the buildings are the sites of several spooky encounters, including a faceless nurse. Wails and screams have also been heard.

Students and staff also report “strong” and “unusual” odours in the building that used to house the morgue.

Before it was Ontario’s Legislative Assembly, Queen’s Park was home to the University Hospital for the Insane.

The ghosts of several women are said to haunt the grounds, including the sorrowful “White Lady,” the “Maiden” who conceals her face with an apron, and the “Hanging Woman,” who dangles from a hook in a basement tunnel.

Toronto Ghosts writes that an angry soldier has also been seen descending the grand staircase in the legislative building.

Built in 1808, the Gibraltar Point Lighthouse is reportedly home to the ghost of its first keeper, John Paul Radelmuller.

According to the Paranormal Seekers, Radelmuller was murdered by two intoxicated soldiers, who then buried his dismembered body around the lighthouse.

Visitors ascending the lighthouse have claimed to see ghostly shadows and felt the floor inexplicably rumble beneath their feet.

The Don Jail began housing prisoners in the 1860s and closed in the 1970s. The jail was known for its overcrowding, inhumane living conditions, and public hangings.

Abandoned Spaces reports that 60 people were hanged at the jail, and several were buried in unmarked graves on its grounds.

The ghosts of the executed prisoners are said to roam the site to this day, including that of a blonde woman who hanged herself in the women’s block.

Currently used as a courthouse, a number of ghostly encounters have been reported at Old City Hall.

Judges have reported feeling mysterious tugs on their robes when walking the building’s rear staircase, and phantom footsteps have been heard descending it as well.

Courtroom 125 (formerly 33) is said to be haunted by the ghosts of the last two men that were hanged in Canada. Muffled moans have been heard from the attic as well.

Legend has it that two stone masons, Ivan Reznikoff and Paul Diabolos, who were working on the construction of University College in the 1850s, fell in love with the same woman.

According to the college, the woman was betrothed to the burly Reznikoff, but ran off with the young, handsome Diabolos instead.

Armed with an axe, Reznikoff confronted the dagger-wielding Diabolos at their empty work site. Diabolos eventually emerged victorious, and threw his rival’s body down a stairwell.

Reznikoff’s remains were only discovered after the fire of 1890, and he is allegedly buried somewhere on campus. His ghost is said to still haunt the grounds late at night.