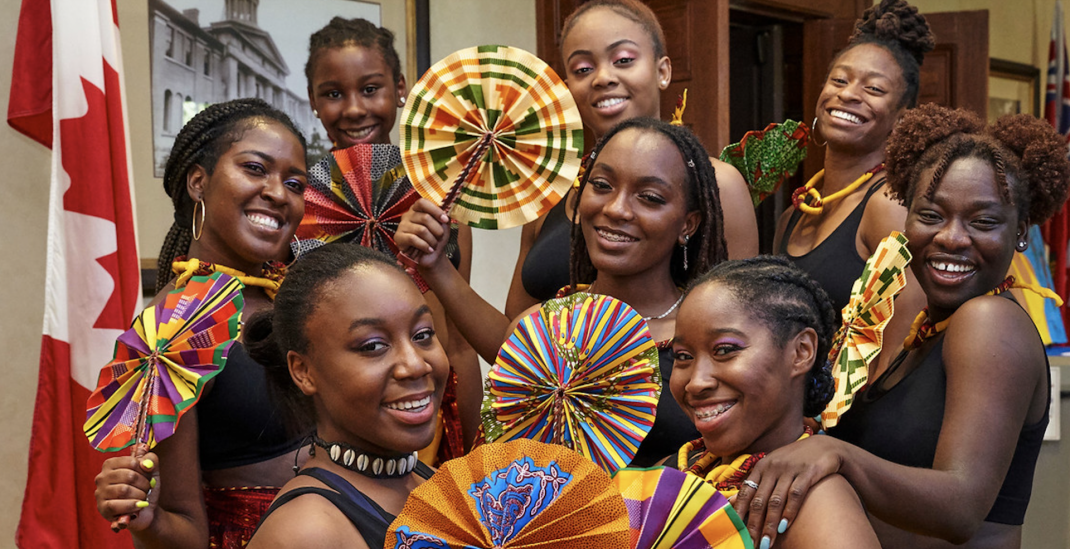 One woman knew in her soul that dancing and drumming was the path to a strong community.

Sanaaj Mirrie’s social media feed is full of inspirational quotes, but she’s no Pollyanna. Hardship and pain have come across her life on many levels, both as a child and in adulthood, but Mirrie simply refuses to let them sink her. Her voice is melodic and sweet but her eyes are brilliant with the fierce intensity of achieving what she defines as her calling: becoming the Founder and Artistic Director of Afiwi Groove School in Ajax, Ontario, just east of Toronto.

At 14, Mirrie moved to Toronto from her birthplace of Jamaica, and despite feeling lost from the culture shock, invested herself in African and Caribbean drumming and dancing after seeing a Black History Month performance at her school. 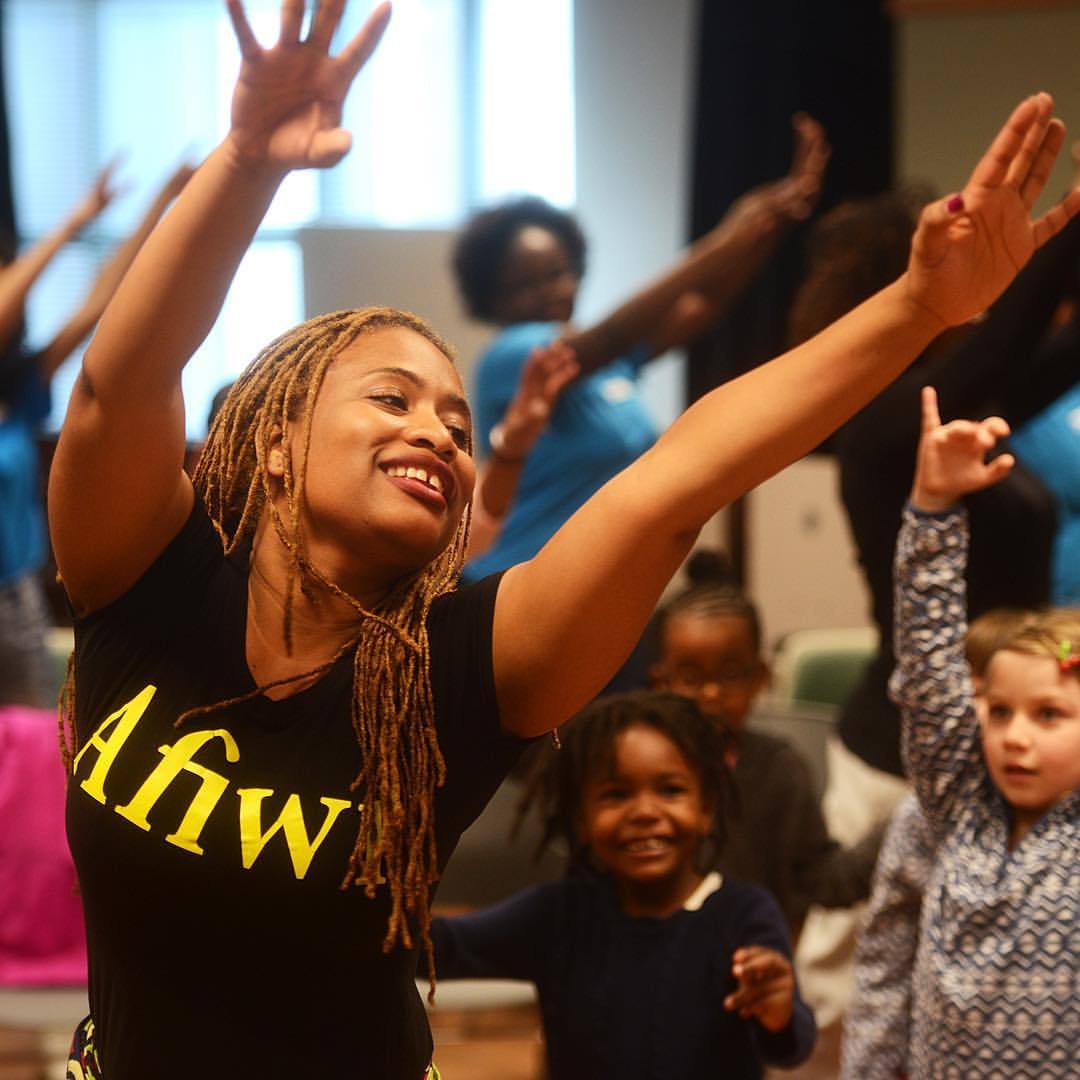 “The drumming and dancing made me feel a part of my birth culture at a time when I felt like an outsider,” Mirrie explained in a phone interview.

“But it was more than that for me; it gave me a sense of fulfilment and purpose.”

Mirrie went on to study at York University. After achieving her BA in International Development Studies with a focus on social and cultural development, she worked at TD bank for 11 years, all the while continuing to learn and teach drumming and dancing. She credits her dance and drumming-related travels during that time with igniting her fire to open and operate her own studio.

On her first trip to Haiti in 2006 to help build a school, Mirrie explained how she saw incredible poverty during the day, but at night in the theatre and dance halls near the hostel where her group stayed, she witnessed the only joy and felt the power the music and dance gave to a temporary freedom from day-to-day struggles.

It was during a trip to Ghana (also in 2006) that Mirrie had what she calls a “life-changing” experience while visiting the castles (now converted to museums to honour victims) where kidnapped Africans had been imprisoned in dungeons awaiting boats to carry them across the Atlantic in the European trade of enslaved humans.

Mirrie saw the horrors her ancestors suffered and she realized her own freedoms and blessings. She felt a duty to honour and respect those ancestors by preserving and sharing some of their African culture and the idea of using her own passionate skills in dance and drumming to bring people together began to germinate.

From Trinidad and Tobago in 2007, to Cuba in 2010 and Guyana in 2011 (two months after her first child was born), Mirrie continued her quest to perform and learn not only the diaspora’s differing dance forms and drumming beats, but about herself, and her pride in connection to her cultural and artistic communities.

Her sense of identity and belonging grew and she wanted to share these positive benefits with children in particular.

In 2013, Mirrie created the Afro-Caribbean dance and drumming school she named “Afiwi Groove.”

She chose the name from the Jamaican Patois dialect where “Afiwi” loosely means “for us; for everyone.”

It represented her desire to create a world where community can come together to lift and empower one another and everyone has the opportunity to fulfil a purpose. The school sublet an existing dance studio space on Sundays and started with only a handful of young students, but grew steadily as time passed.

In 2018, Mirrie, then a single mom of two, gave up her TD corporate office job and invested herself full-time into Afiwi Groove. The school grew, largely by word-of-mouth, social media and via the school’s performance team dance shows at various community, cultural and school events. 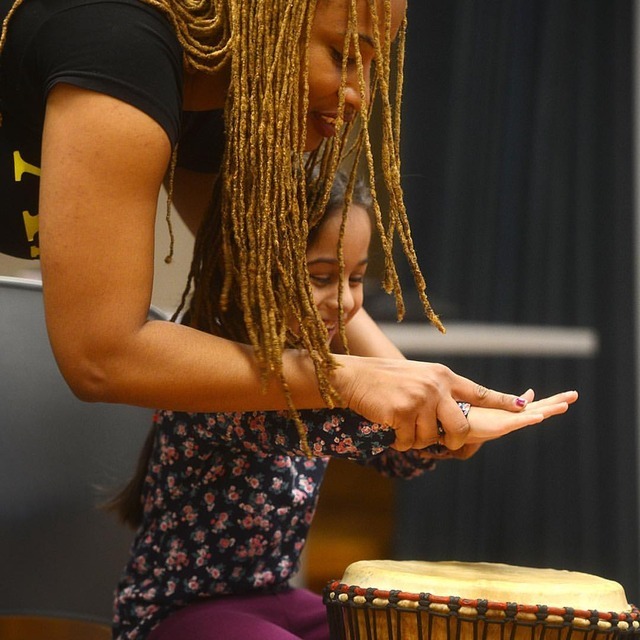 Then 2020 arrived and Covid-19 struck. Like many small businesses, Afiwi Groove was negatively affected. Some parents could no longer afford the tuition, and government lockdowns – when imposed – meant no classes in the studio. Mirrie, her mentors, her board of directors and her teachers had to pivot, fast. 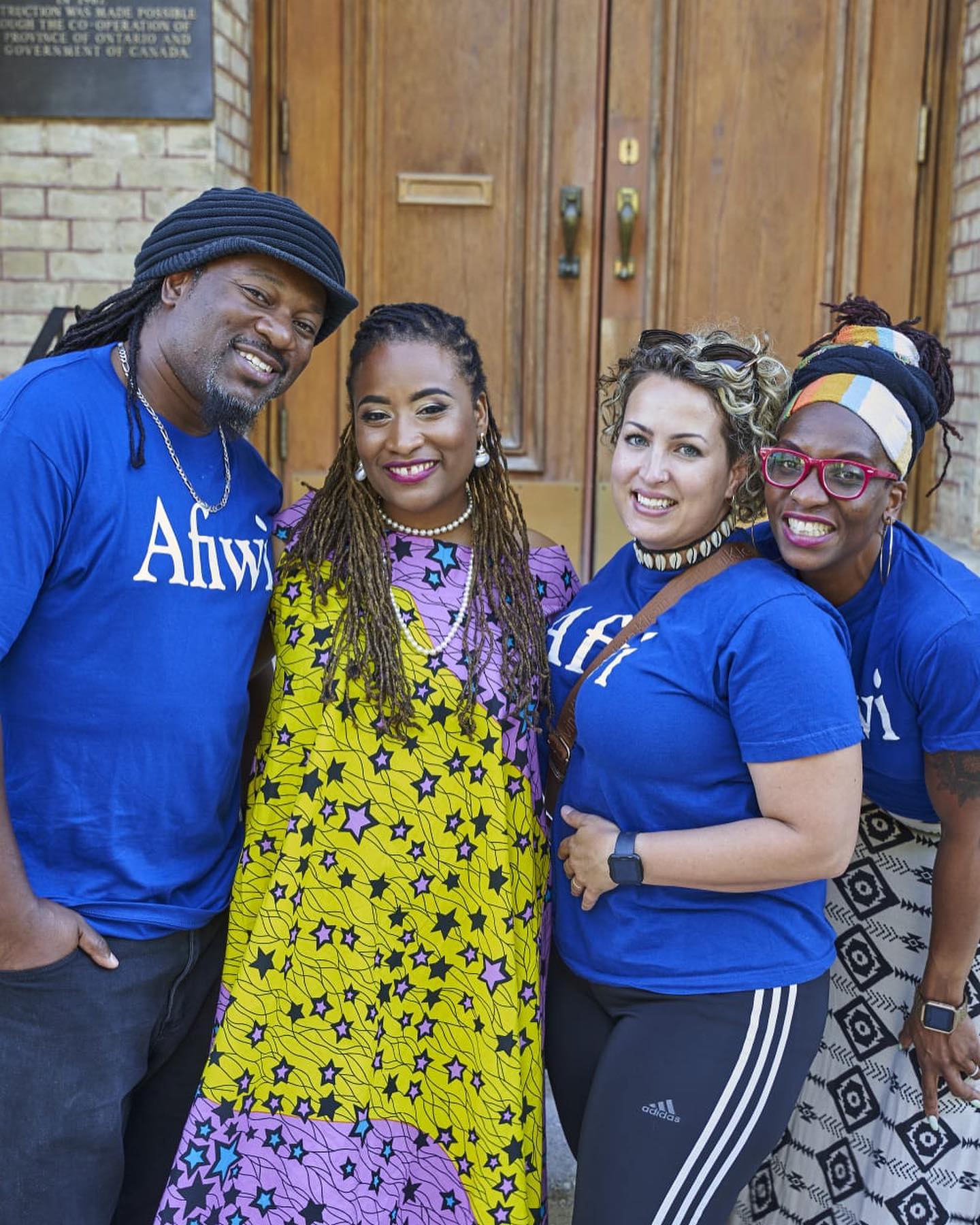 Afiwi Board of Directors/ Tony Captures

The circles were broadcast live via the Afiwi Groove Facebook page so people across Canada could join in using a real or makeshift drum.

“Each event was filled with 10-20 young people between the ages of 5 and 25 drumming, plus onlookers. The communities were so supportive and enthusiastic to our presence and effort; we felt so welcomed and really knew we were connecting with some of the participants on a deep level.” 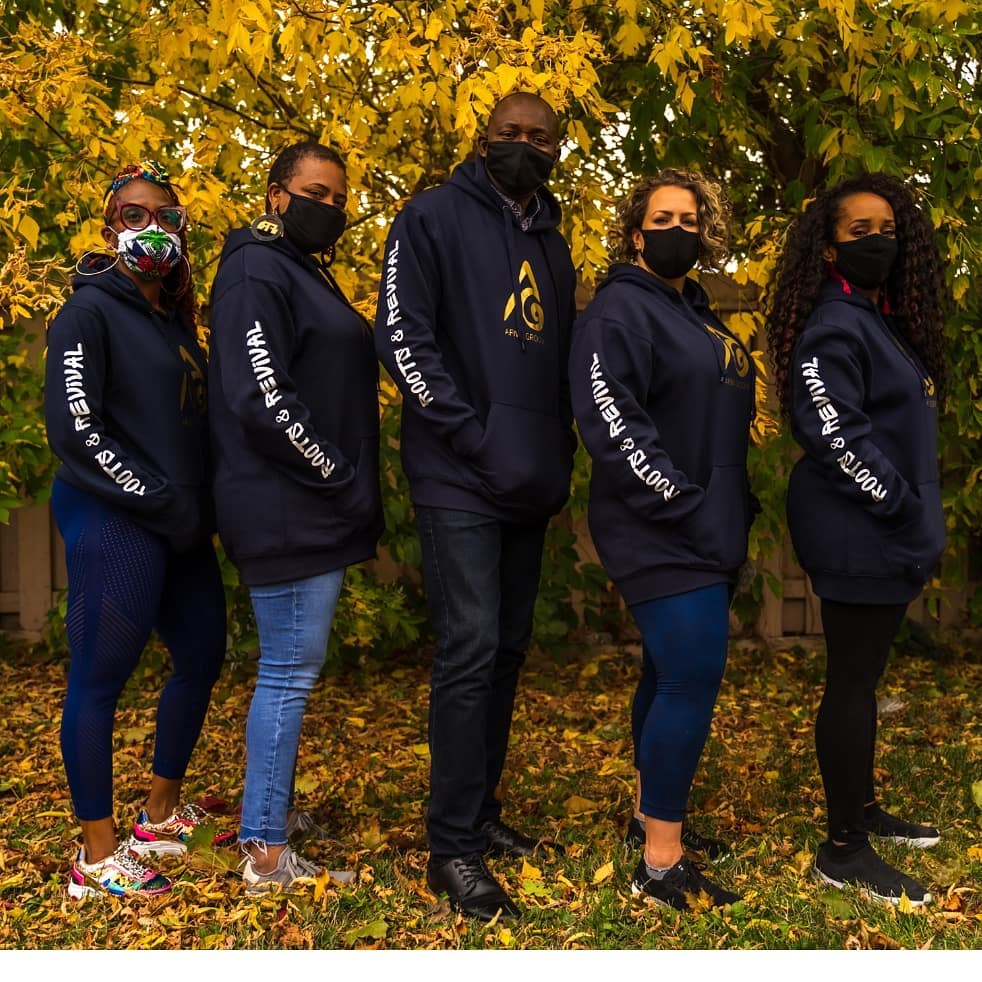 The grant funds were also used to foster partnerships with 17 organizations and groups across Canada already working with underserviced communities.

Afiwi Groove offered online Afrobeat/Caribbean dance classes via Zoom video on Mondays, Wednesdays and Sundays for kids who had felt the impact of Covid-19 via job losses, illness, Covid death, or kids stuck at home due to compromised immunity.

The classes quickly filled to capacity and after eight weeks, the parents expressed sadness to see them end. Afiwi Groove approached the Red Cross Relief fund to share what they had accomplished and received a second grant. Their original intent was to help 600 kids and they’ve now taught dancing and drumming to approximately 1,400 children without any fees to their families. 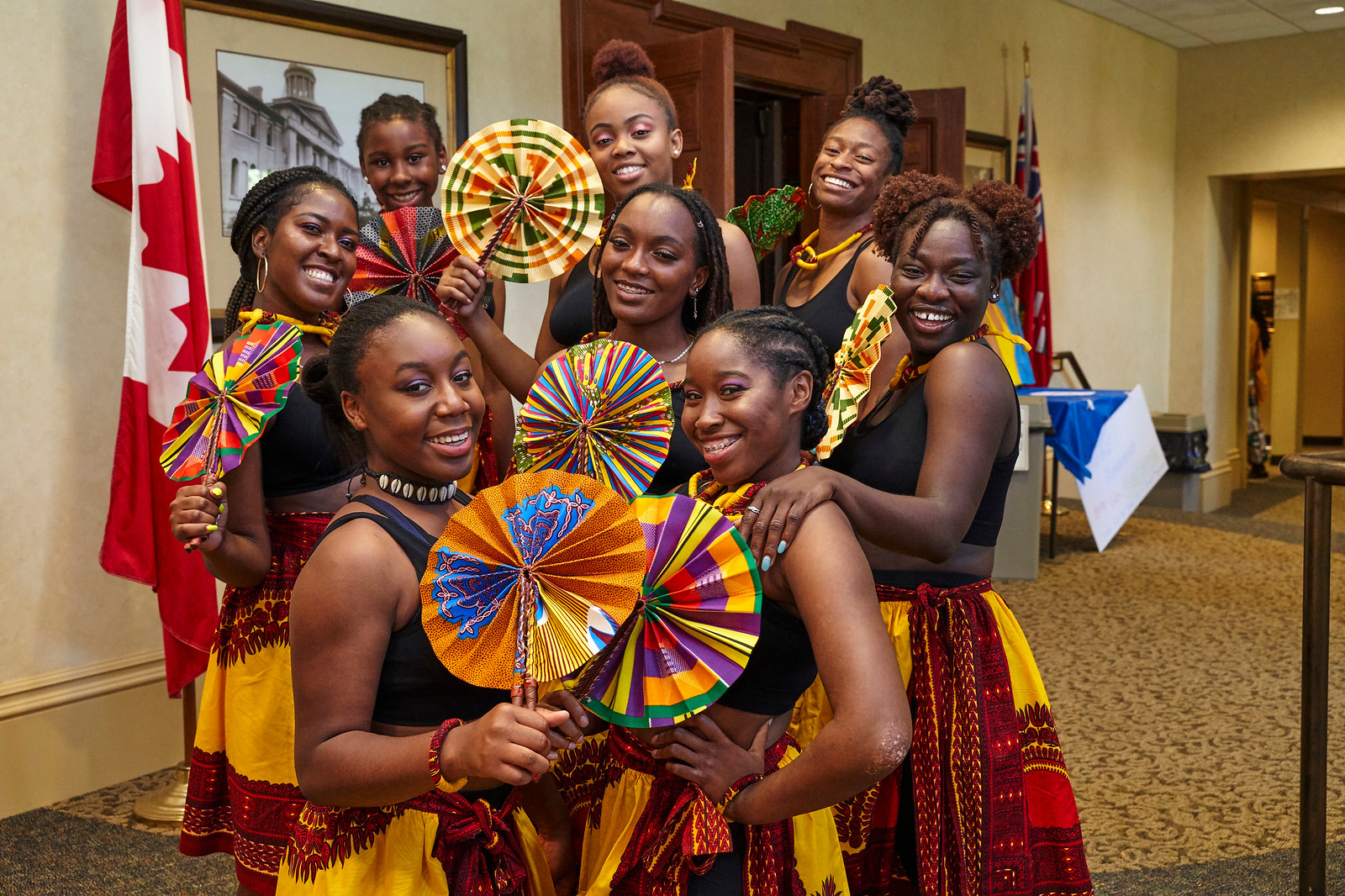 The recent project funded by the second grant and named “Afiwi Roots and Revival” makes the assumption everyone has been impacted by Covid-19 in some way and aims to get communities reconnected to their roots – whether that’s a specific culture, their immediate families, their self, their purpose, or to stay grounded, be still and connect with what truly matters in life.

The Revival component strives to create a refresh of mind, body, soul and spirit.

In a pandemic that is burdening women disproportionately, Afiwi Groove’s grant has also funded a “Roots and Revival – Queens Edition.”

The multiculturally-inclusive women’s program set an original target of 100 women to connect virtually for four evenings a week between January and February, one of the toughest times for depression, anxiety and mental health issues, even without Covid-19.

The empowerment circles aimed to address feelings of isolation and provide a safe, nurturing space for women to discuss self-care, mindfulness, trauma and therapy, coping, fear, grief, PPD during Covid, working towards fulfilling your dreams and to dance. The group surpassed 500 intergenerational women aged 30 to 65.

In addition to all the grant-funded projects, Afiwi Groove continues to offer regular Afro-Caribbean and drumming classes to kids, teens and adults. It’s great exercise, stress relief and time to forget about work, school or anything else but feeling the music in your soul.

“My daughter has been dancing with Afiwi Groove for just over a year. She enjoys learning all the different dances and I love that it connects her to our culture in a powerful way. She is learning to appreciate Caribbean and African culture and asking questions about countries and other topics that come up in class.” Monique Guthrie wrote in a message.

“It’s so much more than just dancing.”