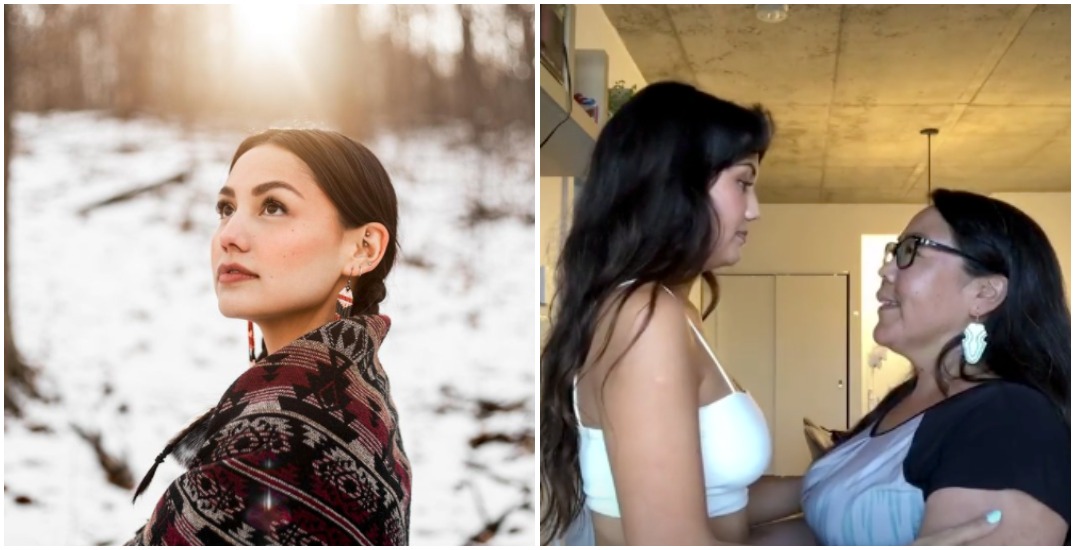 While many turned to outward hobbies during the pandemic, Shina Novalinga turned inward. The Nunavik-born, Montreal-based student used her extra time to learn even more about her Indigenous heritage, tapping into her mother’s knowledge about their shared Inuit culture, which made her feel like “a fuller person,” more connected to her identity, along the way.

What she hadn’t expected is for some throat singing videos of her and her mother Kayuula Nova to go viral on TikTok, catapulting her into the role of high-profile cultural influencer in a matter of a few weeks.

Since joining the platform in June 2020 (@shinanova), Novalinga has amassed 1.3-million followers by using the video-sharing app as a conduit for cross-cultural education.

Her content ranges from correcting myths and biases about her culture, to her thoughts on the underrepresentation of Indigenous faces in the media, to Novalinga modelling beautiful fox-fur-finished parkas, handmade by her mother.

The posts, infused with humour and Novalinga’s signature natural charm, are grounded in deep meaning.

@shinanovaLearn how to throat sing with me! Song is called the Love Song 👏🏼 #throatsinging #culture #inuit♬ original sound – Shina Nova

“The message I want to send [to my followers] is to not be afraid to reconnect with your identity, roots, and culture. To make the effort,” says Novalinga, over Zoom from Montreal.

“Also, it is okay to take your time.”

The 22-year-old Inuk content creator is speaking from experience. Case in point: Novalinga started throat-singing as a seven-year-old girl, but didn’t reconnect with the practice until just a few years ago.

The traditional pastime, which usually involves two women facing each other while singing, is considered a kind of competition to see who can lose their breath first.

“One is a leader, she decides what sound to make, and the other is a follower, who has to try and make the same sound,” explains Novalinga, adding that the practice is meant to mimic the sounds of nature and holds deep meaning for her culture.

At first, Novalinga was too shy to post the performances to a wider audience.

Not only was she vulnerable about the fact that she was still honing her throat-singing skills, but because every time she had talked to people about the practice in the past, they didn’t know quite how to react.

When her mother started posting their videos, Novalinga quickly kicked her shyness; the positive online reaction propelled her into the public eye, and it wasn’t long before publications like Vogue were reaching out for interviews.

With millions of eyes on her account, she’s found a very personal niche: educating her quickly-growing audience about Inuit culture.

Besides, Novalinga knows there are many people out there who could use the information—stereotypes and misconceptions run rampant. Take throat singing, for instance: although the province of Quebec acknowledged the importance of Inuit throat singing (katajjaq) with an Intangible Cultural Heritage designation in 2014, one doesn’t have to look far back in Canadian history to find a time when the traditional practice was deemed taboo and sin-like.

Novalinga hasn’t forgotten those threads of colonial erasure; neither has her Inuit community.

Growing up in Montreal, the creative was often confronted by negative reactions about her Indigenous heritage, making it difficult to fully embrace her culture.

Today, the global recognition and respectful love that flows from her online community has helped her accept her roots.

“It has actually changed my priorities, of what I put first in my life,” she says.

“My Inuit culture, my identity—it is definitely at the top of the list now. And by sharing my culture, I am always one step closer to knowing who I truly am.”

Fighting for Indigenous representation is yet another reason that she puts herself out in the public eye.

“I want Indigenous youth to know that they are as worthy as everyone else. On billboards, on the cover of magazines, you see all these beautiful ethnicities and backgrounds, but there are not enough Indigenous people represented,” she says.

Another hope is that she can strike a chord in those who may be wary of connecting with their roots, for whatever reason that may be.

“There are so many indigenous kids out there in foster homes, with non-indigenous parents,” she adds.

“My message to them is to not be scared. They still have their identity; if they are willing to learn, it is still inside.”

@shinanovaThank you all for the donations, we’ve raised $12,482. for the shelters and the homeless. So yes, it’s a GREAT day to be Indigenous❤️♬ smoke signals x land back by a tribe called red – Ali • ᓂᒥᐦᐃᑐ ᐊᓯᓃᐩ

This past December, Novalinga tapped into her influence and raised $12,482 for a local Indigenous women’s shelter. Raised by many wonderful women growing up, it is very important for her to protect and support them however she can.

“Especially our Indigenous women, who face a higher risk of abuse and danger.”

Indeed, supporting and connecting with other Indigenous people fuels Novalinga daily, as do heartfelt messages from Indigenous parents, other proud throat singers, and Inuit living elsewhere, like Greenland.

Currently in business school, Novalinga’s sees indigenous studies in her future, but first she’s making a throat-singing album with her mother, which she hopes to wrap by the end of 2021.

Immortalizing their practice with a permanent record is yet another way to reclaim her heritage and make it accessible, as she puts it, “so the whole world can listen.”

Listening to Novalinga, we most certainly are.