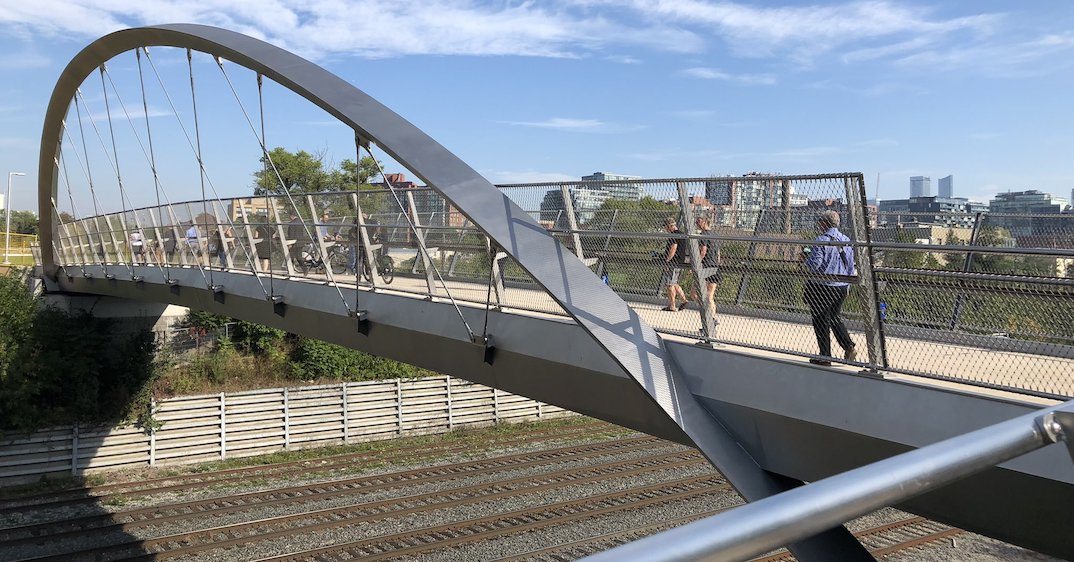 After nearly a decade of work, the Garrison Crossing Bridge, connecting King West to Fort York and the Waterfront, is finally open.

On Tuesday, Mayor John Tory, along with councillors Joe Cressy and Mike Layton who spearheaded the project, announced the grand opening of the pedestrian and cyclist bridge, which runs across the railway tracks, connecting Trinity Bellwoods Park in the north and the Fort York grounds in the south.

It’s open! After 10 years of work the Garrison Crossing Bridges connecting King West to Fort York and the Waterfront are officially open. pic.twitter.com/LYvpKpSHyo

Garrison Crossing is a two-bridge structure built over two rail corridors that run through the downtown core.

According to the city, the 52-metre northern bridge structure spans from the Stanley Park South extension over the Kitchener rail corridor to the north side of Ordnance Triangle Park.

The 49-metre southern bridge structure spans from the south side of Ordnance Triangle Park over the Lakeshore West rail corridor, to the grounds of the Fort York National Historic Site.

A proud moment today opening the Garrison Cossing bridge with @joe_cressy & @JohnTory. Project was derailed in early days, but I fought along side community to get it built. Includes important connect & 2 new parks. thanks to city staff and neighbours involved at every stage pic.twitter.com/7eOelmJfIE

According to Layton, the project has been a long time coming and was derailed in its early days. However, thanks to hard work from Layton, Cressy, and city staff, the project is finally complete.

Today, after a decade of work by City Staff and Councillor Mike Layton, we will open Garrison Crossing. This city building project will re-connect downtown to Fort York & the waterfront, and stitch together the booming King West, Fort York & Liberty Village neighbourhoods. pic.twitter.com/L3skKFXmKC

Tory said the Garrison Crossing is the first stainless steel bridge of its kind to be built in Canada. The project was led by CreateTO and Dufferin Construction Company.