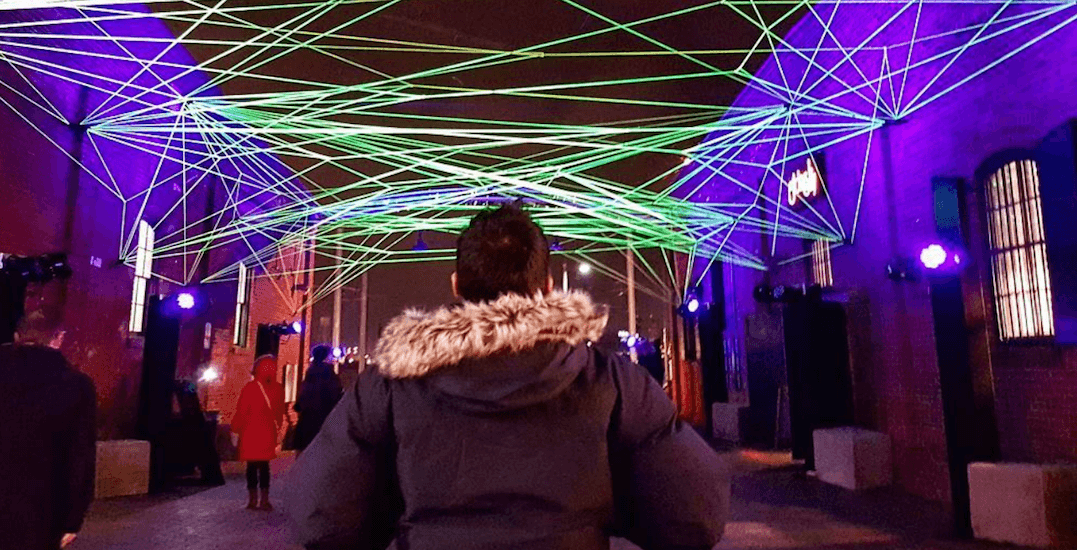 With so many incredible events happening daily in Toronto, experiencing the city can get seriously expensive.

But thankfully there are also a ton of awesome events and activities happening this season that actually won’t cost you a thing!

From winter festivals and outdoor art exhibits to family-friendly events and skating parties, here are the top free winter events happening in Toronto.

What: This winter, the highly anticipated Bentway Skate Trail located under the Gardiner Expressway will officially open to the public and will host a series of special events all winter long. Events and activities include free Monday night skate rentals, Friday night skate parties, and Ice Breaking Workshops.

When: January 6 to mid-March
Where: The path runs from Strachan Avenue to Bathurst Street

What: The No Pants Subway Ride is back for another cheeky year. Hosted by the No Pants Society, the risqué subway ride will be happening simultaneously in 50+ cities around the world with the hopes of bringing a smile to commuters’ faces.

What: Each Tuesday in January, you can stay warm as you  learn how to Bollywood dance. This beginner-level class will work through technique and style while building a fun short routine. No experience necessary!

When: January 12, 6 pm to 7:30 pm
Where: Under the Gardiner Expressway from Strachan to Spadina

What: The Toronto Design Offsite Festival TO DO is Canadas largest cultural celebration of design with over 100 free exhibitions, window installations, and events forming Toronto’s design week.

When: January 19 to March 4
Where: Distillery District

When: January 19 to February 25
Where: Queens Quay from Harbourfront Centre to the Toronto Music Garden

What: The nation’s capital is about to throw a massive winter festival to celebrate its enchanting snow-covered season. And it’s very much worth a little road trip. Winterlude is an annual free festival that spans over three weekends in February, and it all begins with a kick off party. The party takes place on February 2, d will include ice sculptures, live music, and an epic outdoor dance party.

When: February 2 to 19
Where: Various locations, Ottawa

What: Calling all soca lovers – the doctor is in! Dr. Jay de Soca Prince will be taking over the Natrel Rink this month as he spins soca rink-side for the hottest winter party in town.

What: MANIFESTO is one of Canada’s biggest celebrations of hip hop culture and is a multi-disciplinary, world-class organization with a positive social and economic impact. On February 10, MANIFESTO will be taking over DJ Skate Night.

When: February 18, 10 am to 5 pm
Where: Inside the Fermenting Cellar in the Distillery District

What: This Family Day, bring your family to explore the history of Toronto and Fort York. Visit the Fort’s historic kitchen and sample some baking from the hearth, enjoy hot chocolate, the roaring fire, and plenty of activities for the little ones.

What: Family Day is the perfect opportunity to get out and experience something new together. The City of Toronto will be hosting a number of free family-friendly events and activities on February 19 at several community centres around the city.

When: February 19
Where: Venues throughout the city

What: Now in its 4th year, WinterStations is an outdoor exhibition intended to celebrate Toronto’s winter waterfront landscape by bringing temporary public art installations to The Beaches.

When: February 19 to April 1
Where: The Beaches

What: Escape the cold and warm up as you take in Moemoeā, a solo exhibition by Canadian artist Brendan George Ko. Moemoeā explores the re-emergence of the Polynesian voyaging canoe in contemporary Hawai’i through photographs and videos.

What: Founded in 1979, the Toronto Storytelling Festival has grown to be one of the largest celebrations of the arts of voice and story. Visitors can enjoy concerts, story talks, and workshops.

When: March 3 to 6
Where: Events throughout the city

What: The St. Patrick’s Day parade is back for the 30th year and will celebrate Irish culture, history and heritage. The parade is recognized as the largest Irish themed event in Toronto and is fun for all ages.