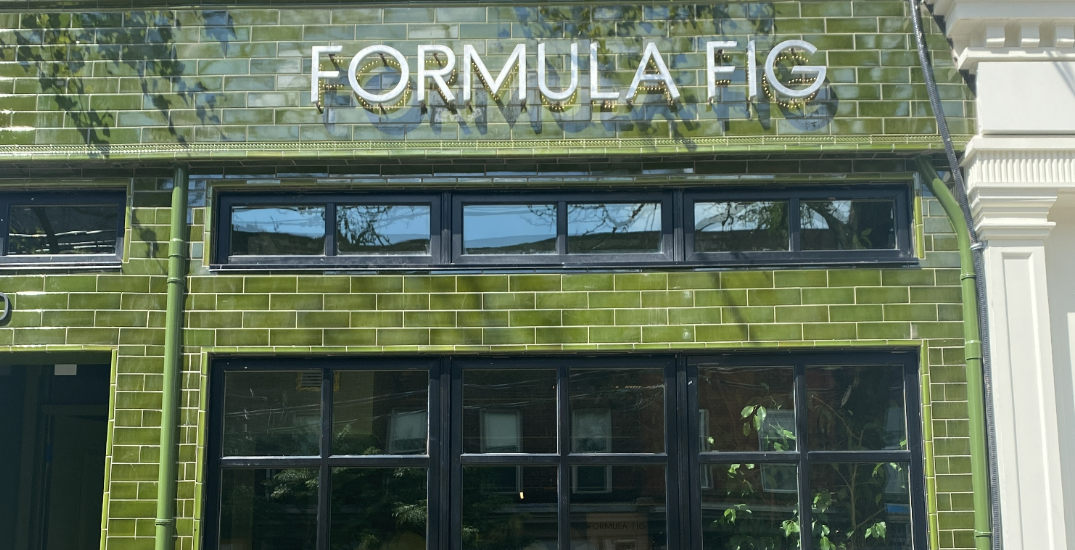 Marked by a striking green storefront and a sign imploring you to “Give a fig about your skin,” the Ossington Avenue outpost is the first of three planned for the city.

As with its Western brethren, the space is made to resemble its namesake fruit – all green, complimented by a bright pink bathroom.

Unlike the others, though, the emerald space is modelled after the London Tube – a nod to founder JJ Walsh’s hometown – with beautifully arched walls and glistening subway tiles. 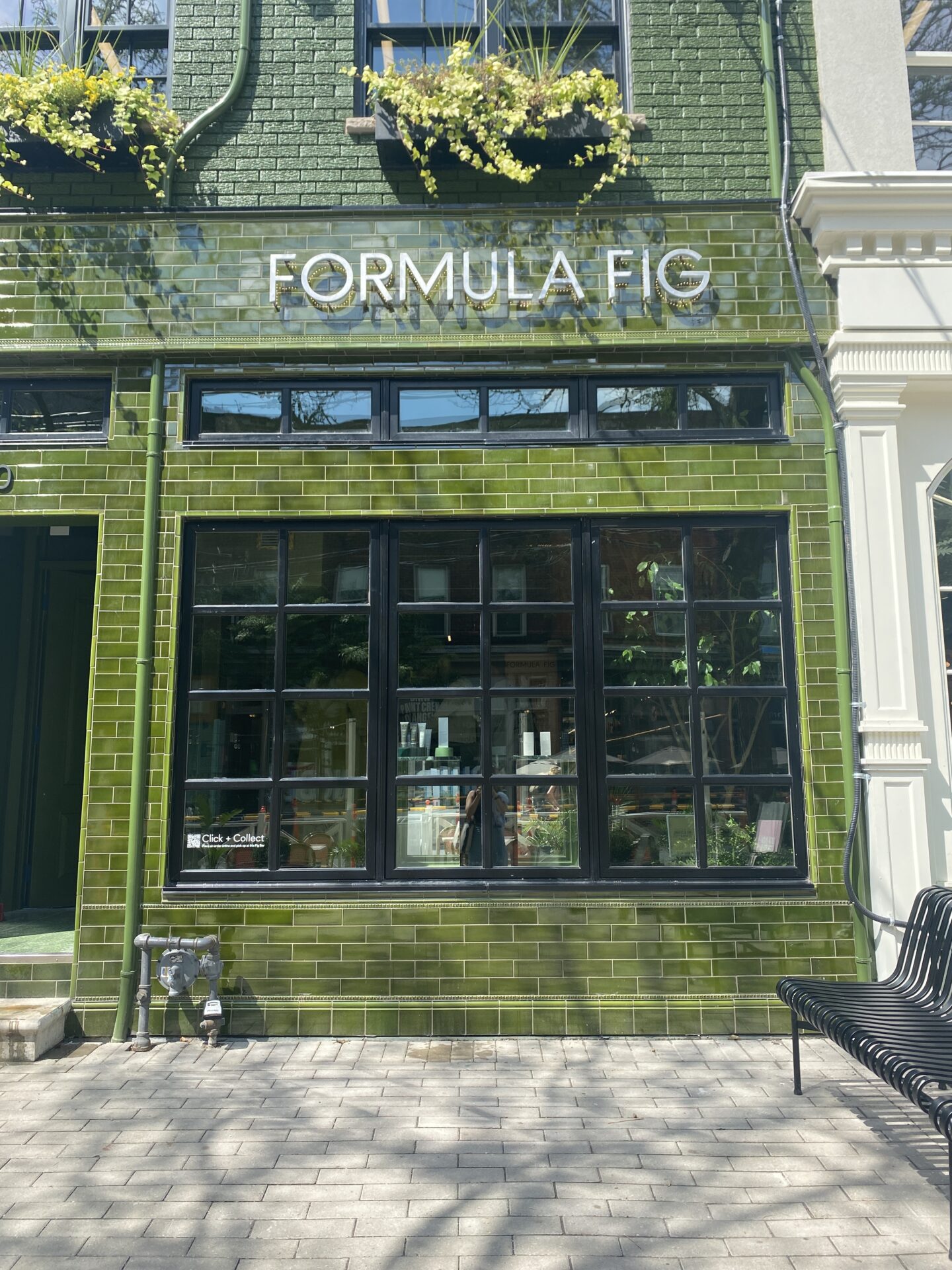 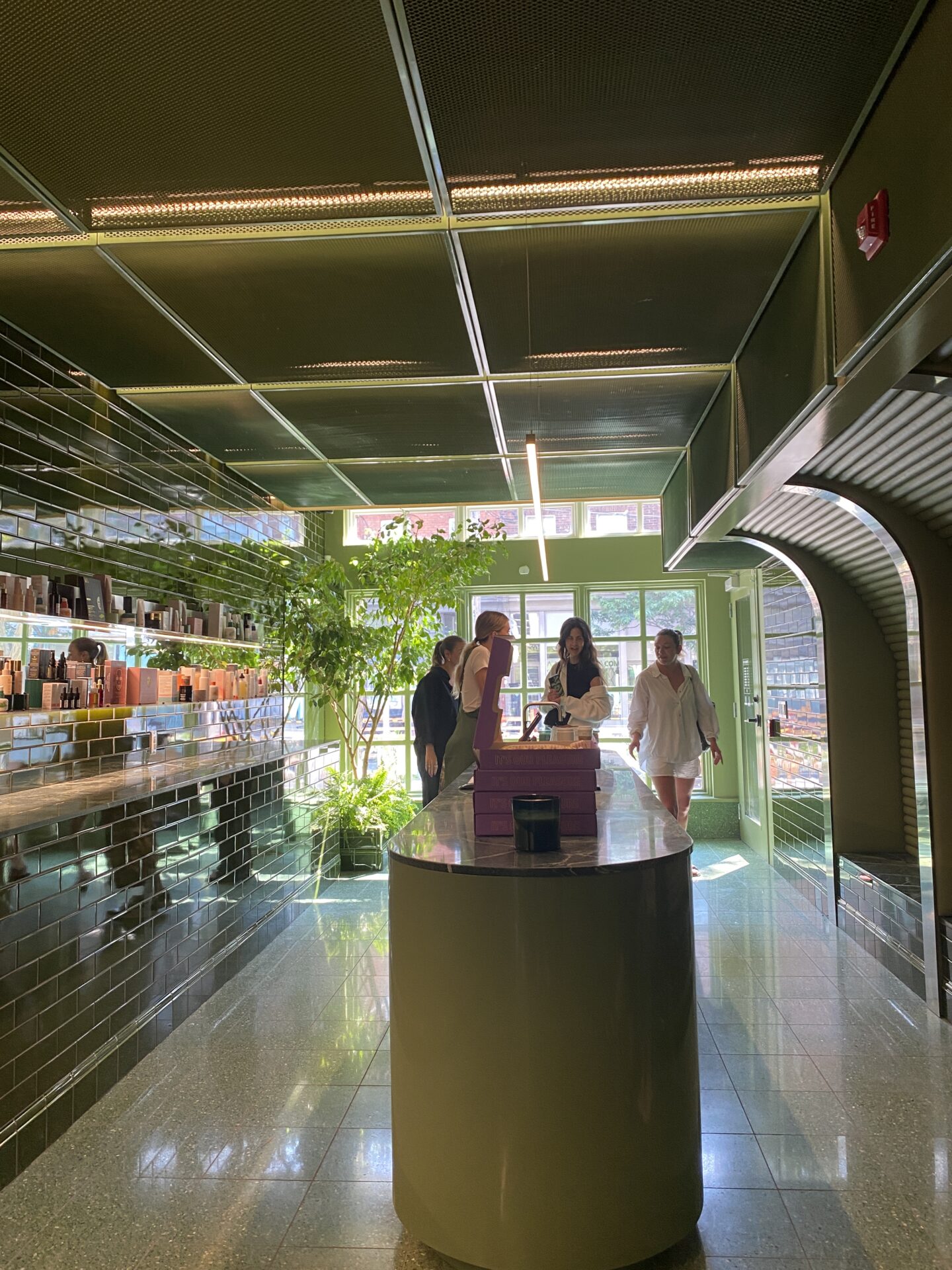 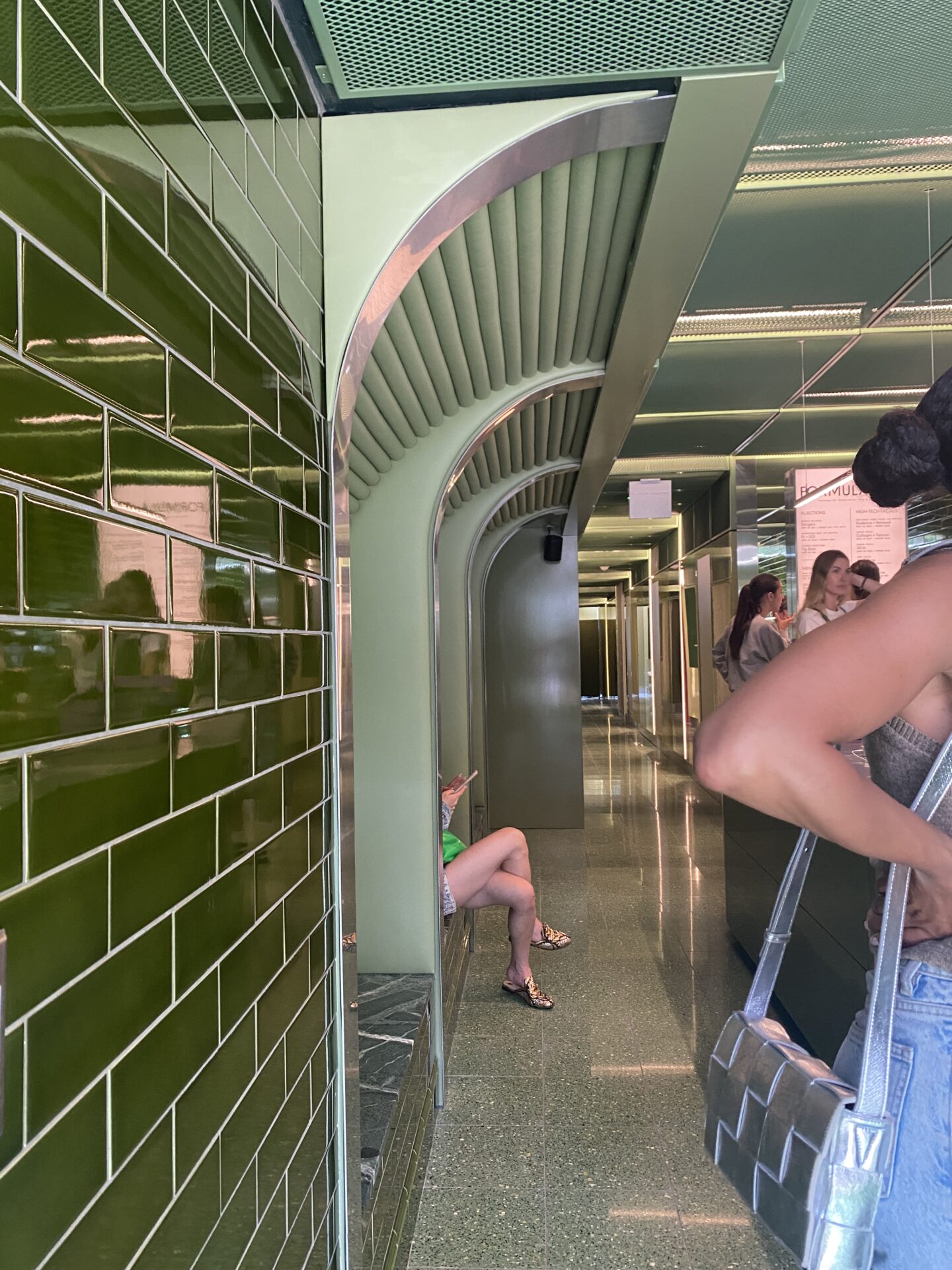 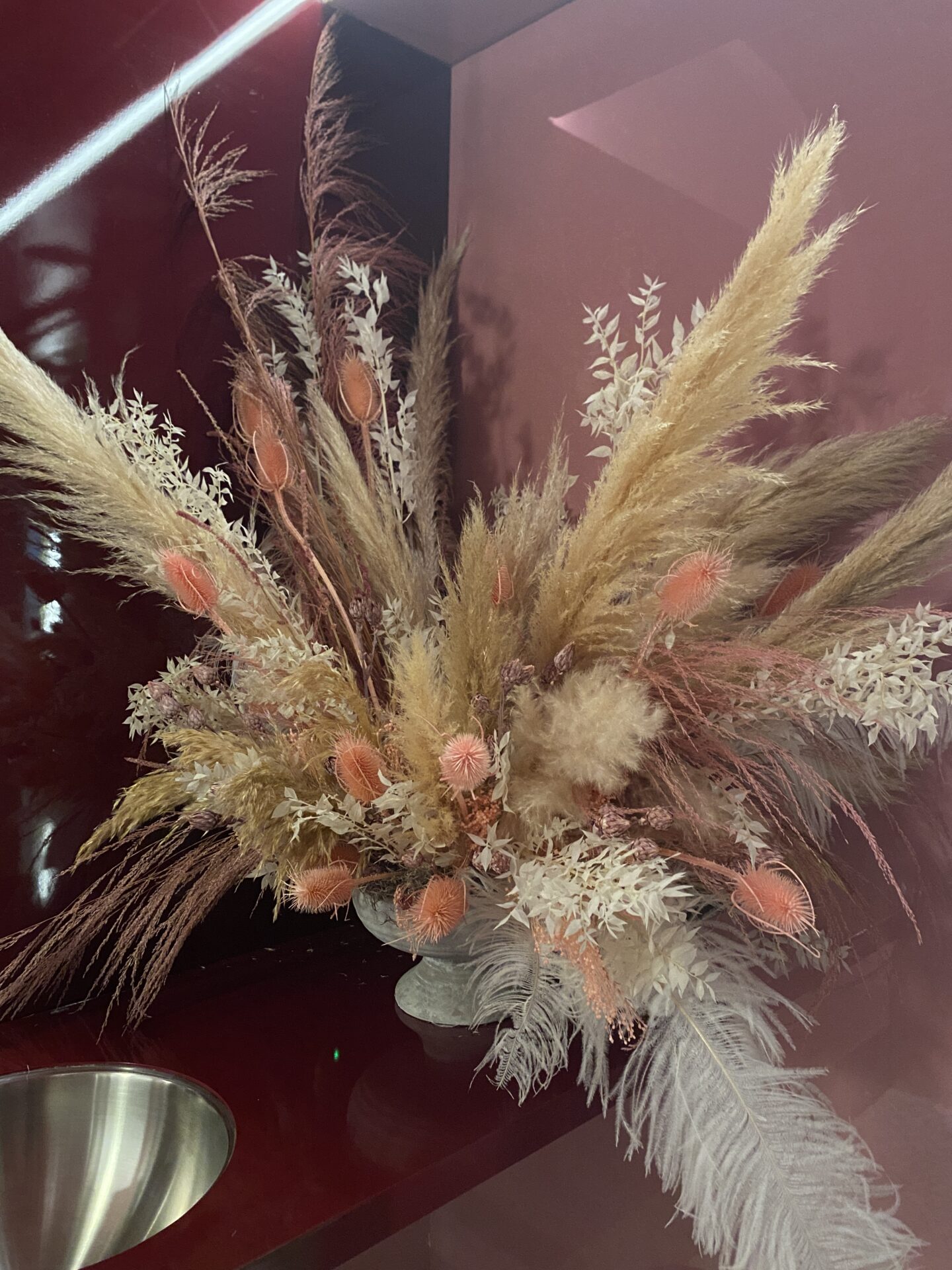 An entirely un-clinical skincare clinic, the space is divided lengthwise by a long marble island. One wall is marked with built-in benches on which eager clients await.

The other is adorned with sleek silver shelves on which luxurious products abound; a rose gold face mask by 111SKIN, Hinoki Body Oil from Wonder Valley, and an antigravity Gua Sha from LOA SKIN, to name a few.

Products to indulge in at home, yes, but also ingredients that go into Fig’s signature array of high-tech facials, including staff favourite Collagen + Texture and client beloved Hydrate + Glow. Each one, as well as Fig’s lineup of injectables, are done in luxurious private pods. 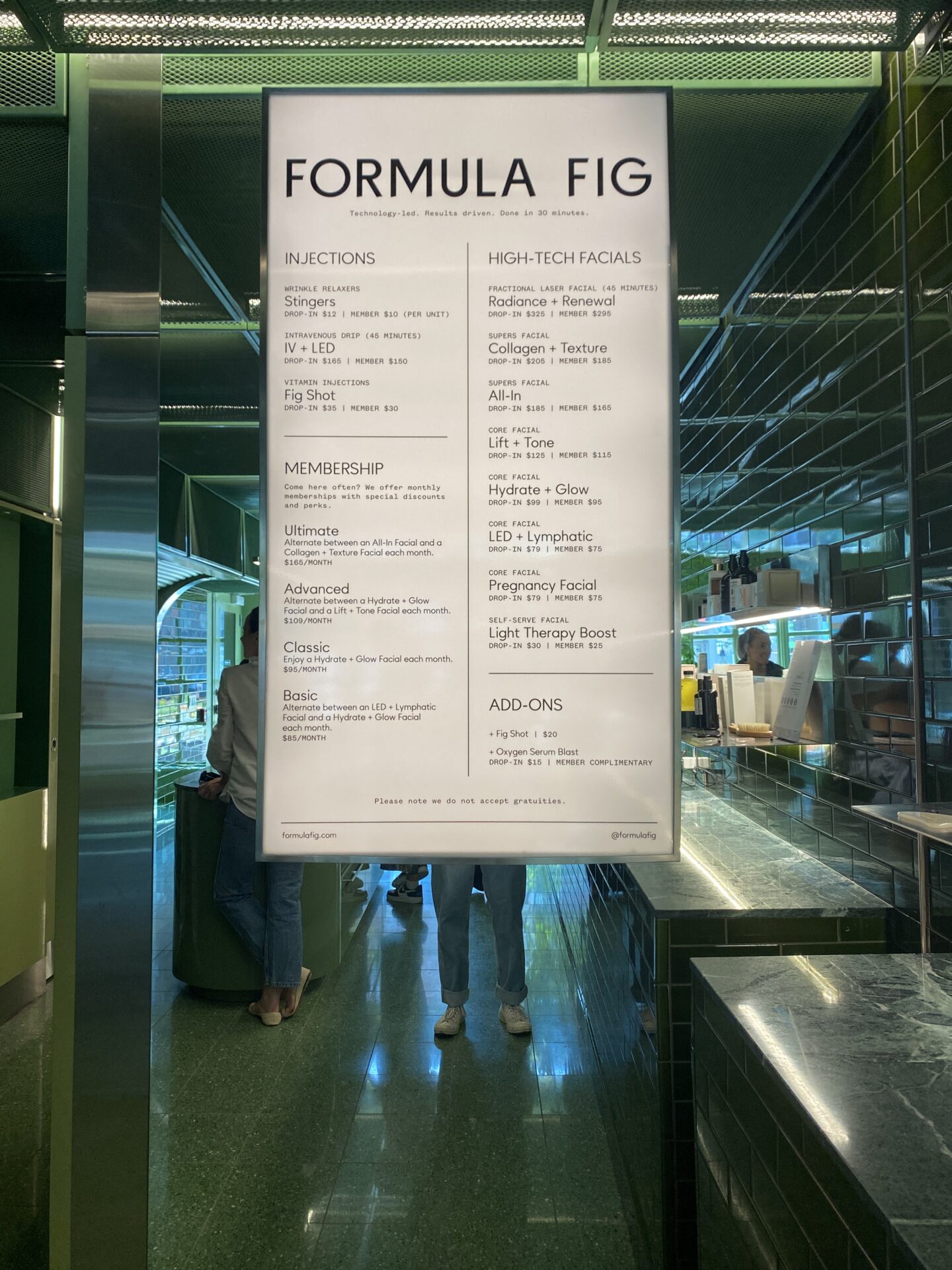 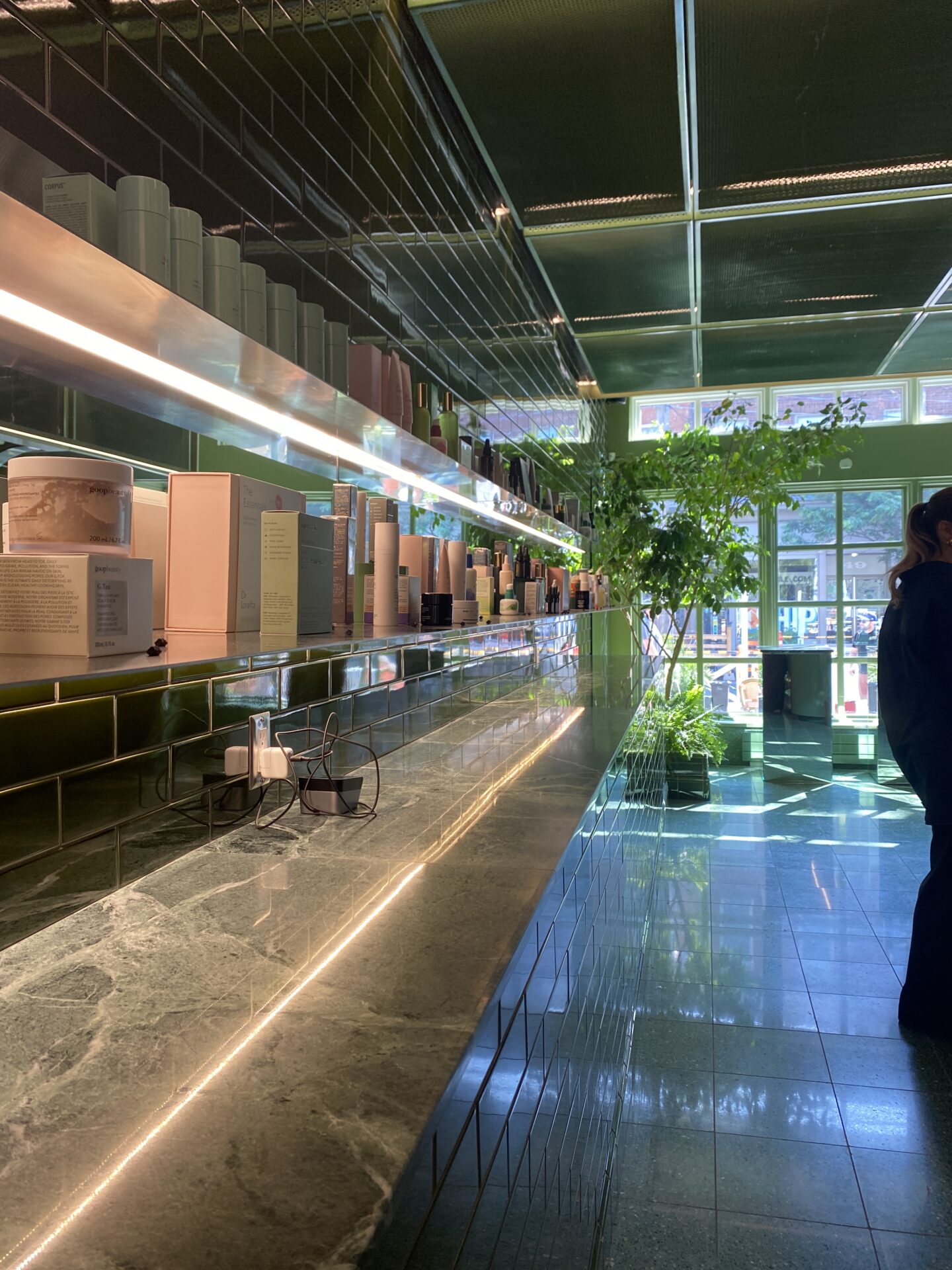 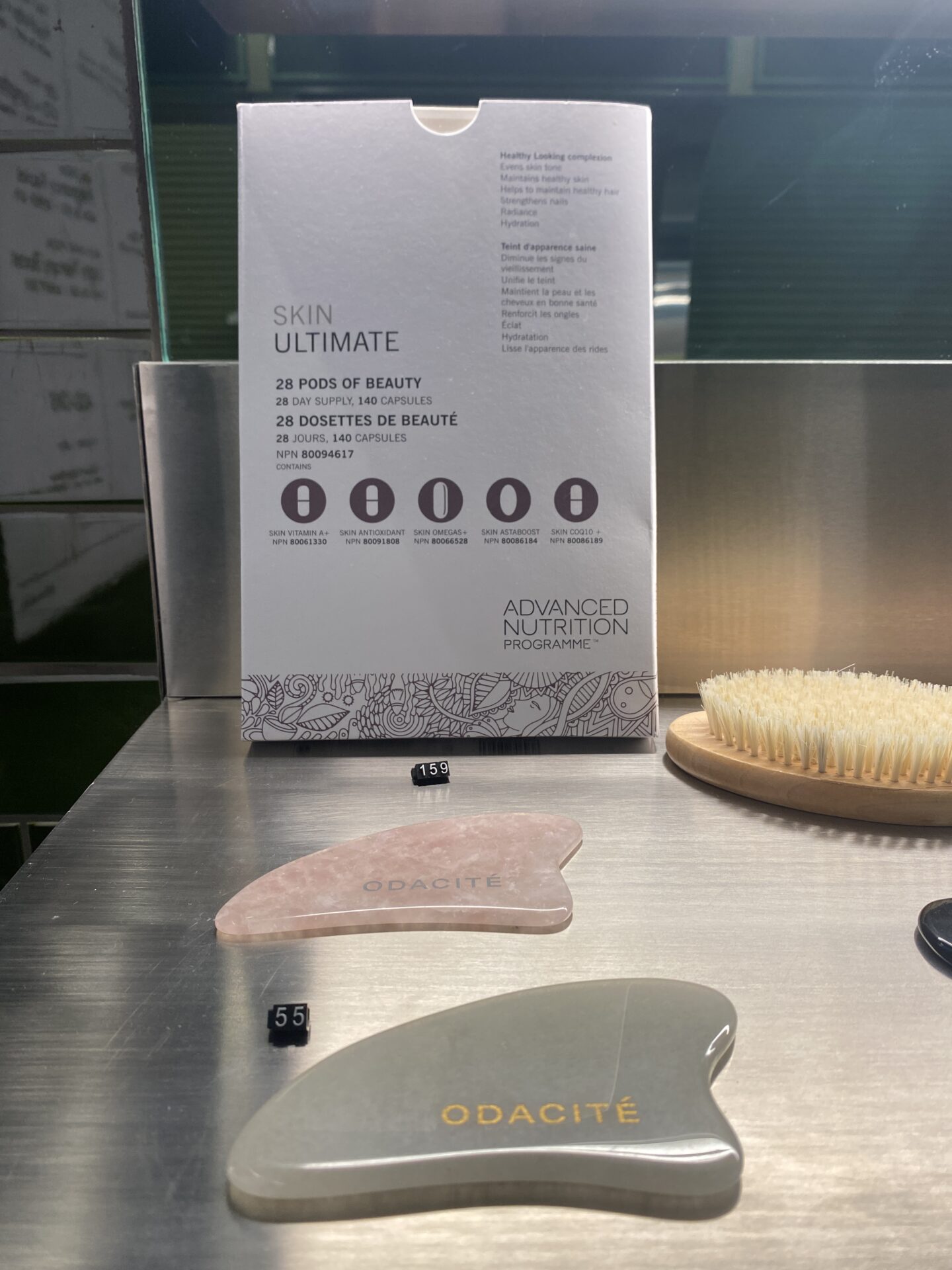 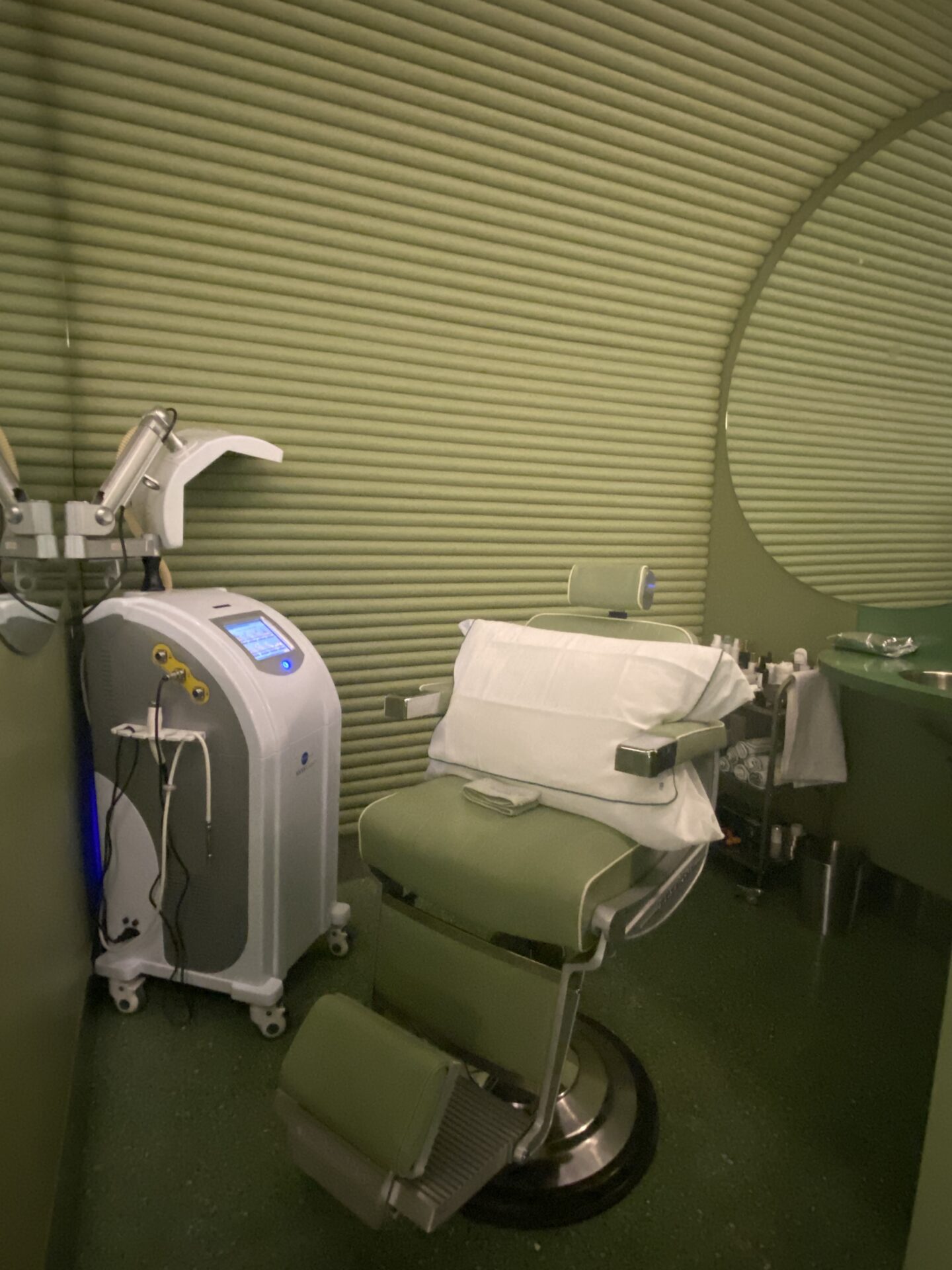 The all encompassing All In uses a combination of products and devices to improve muscle tone and facial circulation, lift jowls and eyebrows, contour, and reduce the appearance of fine lines and wrinkles. All in just 30 minutes.

The process begins with a two-step cleanser. First up is Dr. Loretta Gentle Hydrating Cleanser, which keeps skin silky thanks to marine peptides and red algae. The second, Odacite Blue Aura Cleansing Water, is infused with ayurvedic herbs and salicylic acid.

Microdermabrasion comes next. Akin to a cat’s tongue, the process exfoliates the skin by sloughing off dead skin cells. To achieve deep levels of hydration, Venn’s Age-Response Compound K Hyaluronic Booster is infused into the skin with a pressurized oxygen nozzle.

Then it’s on to the microcurrent. Billed as a “workout for your face,” the procedure stimulates your facial muscles to give you a lifted, sculpted appearance. It’s followed by radio frequency, which uses thermal warmth to stimulate collagen and push out fine lines.

LED light therapy is up next. Several options are available, but the red light gets deep into the skin to further stimulate collagen – think anti-ageing, firming, and plumping.

Venn’s Concentrated Revitalizing Lifting Mask is massaged in while you’re under the light to help hydrate, fight fine lines, and give you that sought after post-facial glow. Venn’s Advanced Red Oil Serum is applied as well, a botanical hybrid of an oil and a serum that brings a “beautiful radiance” to the skin.

The grand finale consists of Dr. Loretta Urban Antioxidant Sunscreen for sun and UV protection, a defence mist to balance your skin’s microbiome, Sommerset Moss Facial Balm to soothe and hydrate your lips, and a spritz of Sangre de Fruta Rose No. 1 Tonic.

The result is an immediate, long lasting glow that will, literally, make you feel radiant.

“The difference with Fig is the education. You’re learning something every time you come in,” the facialist says. “You don’t just show up, have a facial or a Stinger, and leave.”

Stinger’s are Fig’s name for neuromodulator treatments, which use Xeomin to reduce the appearance of fine lines and creases. Other injectable treatments on offer include an IV drip of vitamins and pH-balanced fluids.

“You have to take care of your skin from the inside, too. Then you’ll get that outer glow,” she advises. “Just like a fig.” 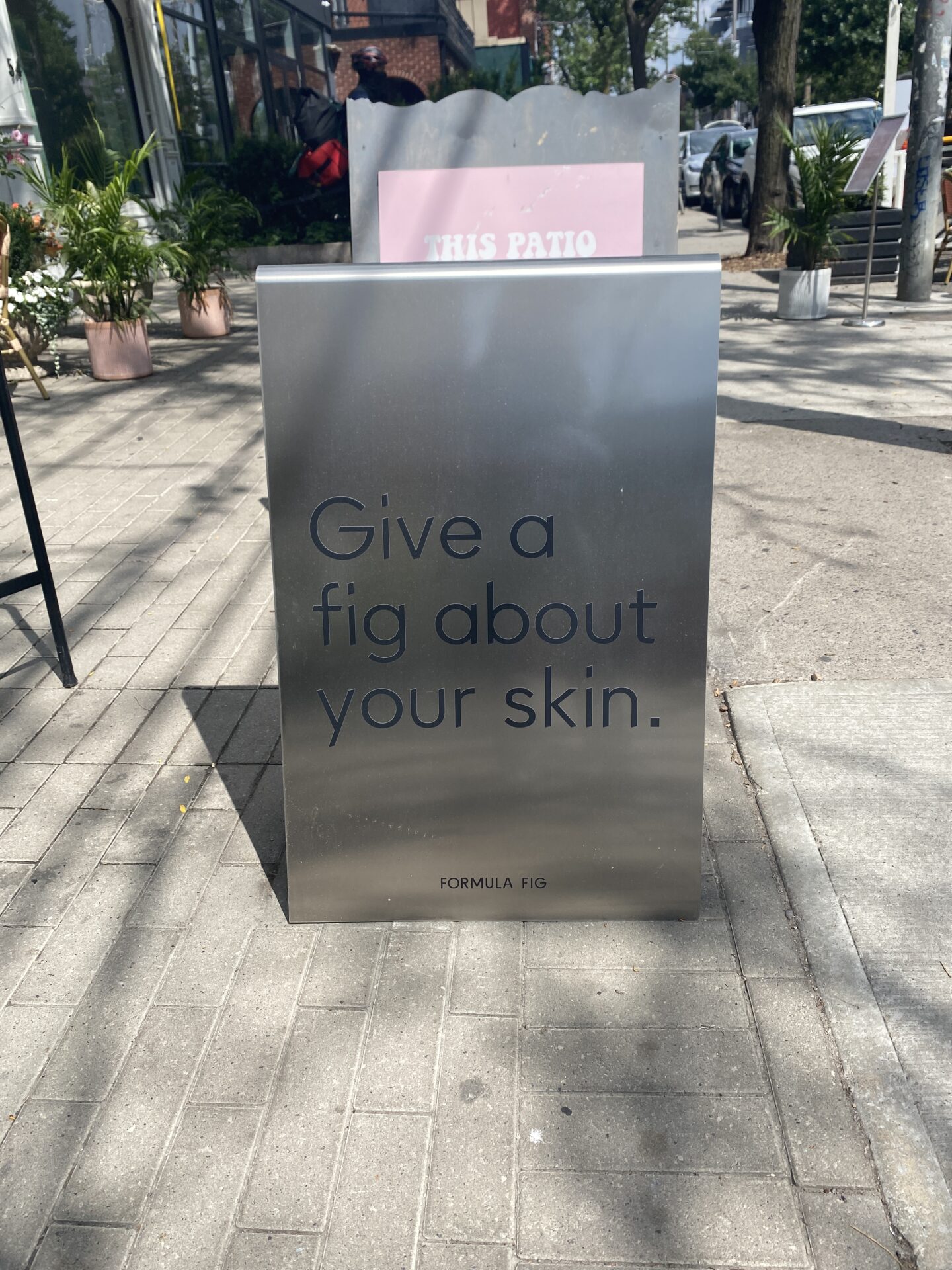