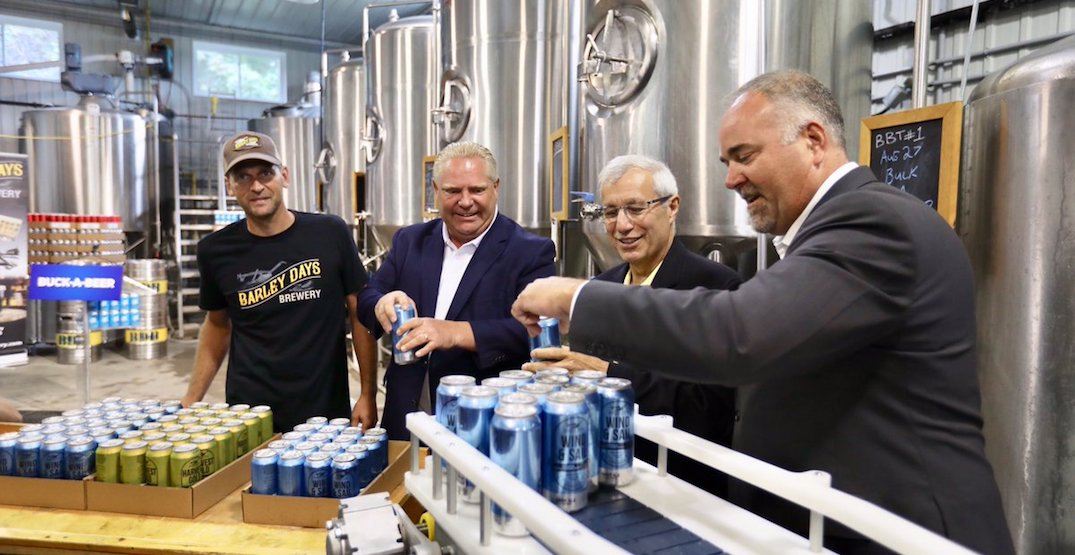 Doug Ford’s promise to reduce the cost of brews in Ontario comes into effect today, August 27.

The new price floor will challenge Ontario’s 260 breweries to lower prices to $1.00 for any beer with an alcohol volume below 5.6% in time for Labour Day.

“The days of the government putting its hand in your pocket each time you buy a two-four or six-pack is over,” said Ford at the time of the announcement earlier this month. “Instead we’re going to do what we said we would do and put Ontario consumers first.”

Currently, the retail price floor sits at $1.25 and while brewers won’t be mandated to lower prices, the ‘Buck-a-Beer Challenge’ encourages Ontario brewers to “receive LCBO promotional considerations such as limited-time discounts, in-store displays on end aisles and shelf extenders, or advertising in LCBO flyers and newspaper inserts.”

Buck-a-beer is back in Ontario! Beginning August 27, beer fans across the province will be able to once again enjoy their favourite beers at a more affordable price. We promised to reduce red tape and put the people first. Promise made, promise kept. #BuckABeer #onpoli pic.twitter.com/2zNorvxZYy

The new price will not apply to draft beer sold in restaurants and bars or ciders, spirits and wine.

While some craft breweries have snubbed Premier Doug Ford’s buck-a-beer challenge, Loblaws has announced that its President’s Choice brand beers will participate.

The grocery chain said that it will be offering its PC 2.5, PC Cerveza, PC Dry, PC Light, PC Genuine, and PC Honey for just $1 per bottle (plus $0.10 deposit) for a limited time starting August 27.

Additionally, Cool Beer Brewery announced that its four packs of Cool Lager will go on sale today for $4 bucks, in selected LCBO and Beer Store locations.

‘Buck-a-Beer’ comes to the @LCBO this Labour Day https://t.co/PD8h5nYJ3E pic.twitter.com/utLceogqjV