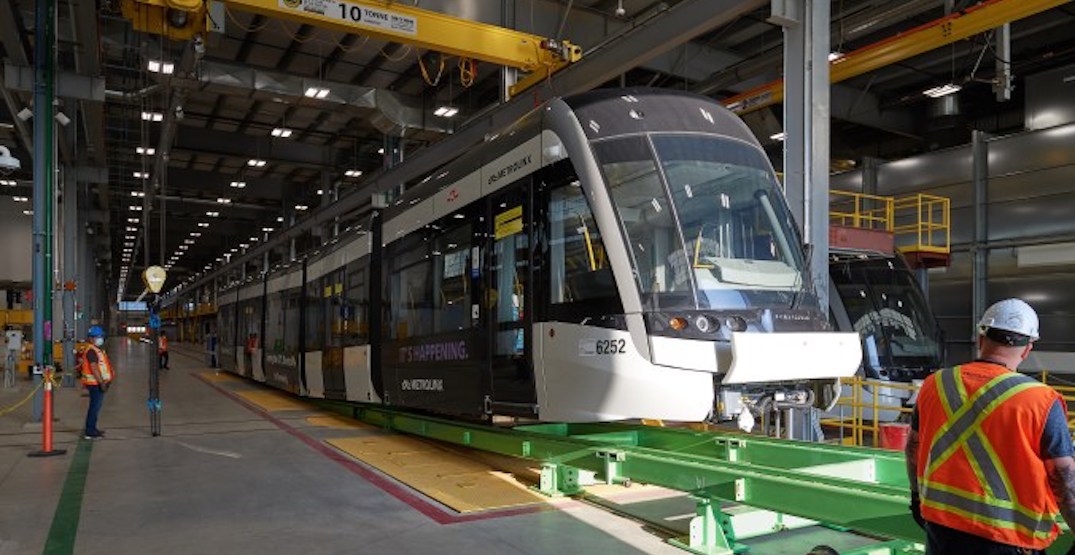 The Eglinton Crosstown LRT has been a long time coming, and now its first six trains are finally making their way to the freshly-built tracks.

Metrolinx announced the milestone in a blog post on Tuesday, saying the first of six light rail vehicles were on the move from the Eglinton maintenance and storage facility to Rosemount Drive, where an above-ground section of the new line is. The five remaining trains will be delivered one at a time over the next two weeks.

They’ve been working on this project since we moved here, finally got to see the build in test mode! Looks good @Metrolinx pic.twitter.com/qmJ4DHDKvU

Metrolinx will use these cars to conduct vehicle testing and commissioning between June and December on the new 19-kilometre, 25-station line. The testing will ensure sure that the vehicles can safely pass through the tracks and clear all poles, signals, wires, and other infrastructure.

Testing will start with the section between Kennedy Station and the Science Centre, and cars will run at just 5 km/h. In July, testing is set to ramp up so that Metrolinx can observe how the vehicles operate as if they were in regular service, which means increased speeds, brake testing, and running multiple vehicles at the same time.

The Eglinton Crosstown LRT has been under construction since 2011.  After many delays, it is now slated to open in 2022.

A new legal dispute between Metrolinx and the construction company Crosslinx Transit Solutions over pandemic-related setbacks could mean additional further delays, but no changes have been announced by Metrolinx as of yet.