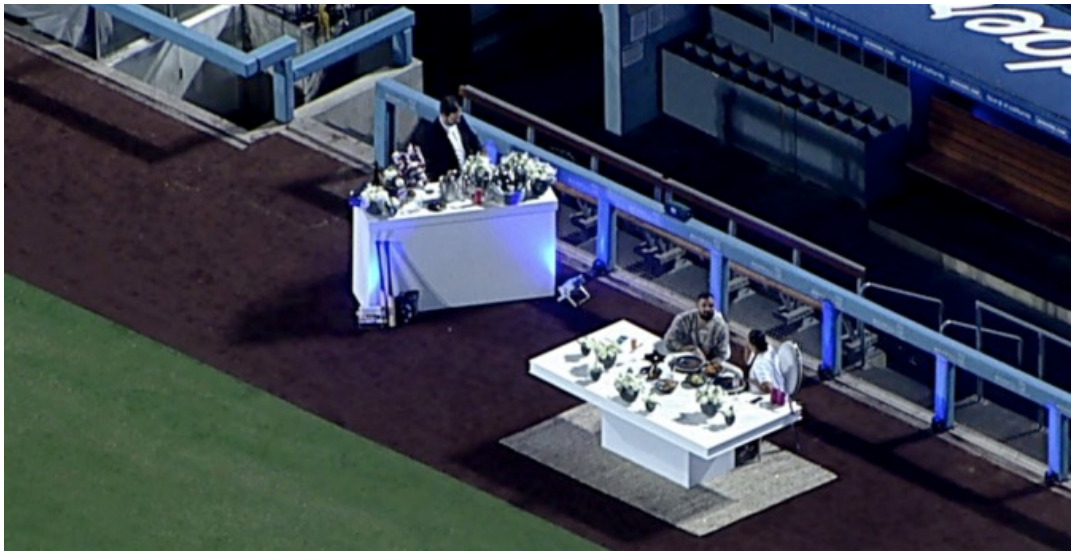 Drake was spotted by an ABC helicopter having a date with model Johanna Leia in a completely empty stadium.

Seen at the home of the LA Dodgers, it was initially presumed that he had rented the place out. But, according to an update earlier today from TMZ, the rapper had made a substantial donation to the LA Dodgers Foundation, which earned him this unique date night spot.

Drake had been spotted with Leia previously at a Sierra Canyon High School basketball game.

The seemingly new couple attended the game alongside LeBron James and Michael B. Jordan, watching James’ son compete in a high school tournament in mid-June, when rumours started to swirl about Drizzy’s relationship status. Leia, who is 40 and six years older than Drake, was also watching her son Amari Bailey play in that game.

According to the sighting made from an ABC chopper, they were comfortably seated along the third-base line.

The couple could be seen at the table with several plates of food in front of them, surrounded by flowers in decorative vases, with a single waiter standing by in case they needed more champagne.

Drake was recently named artist of the decade at the 2021 Billboard Music Awards in May, and his most recent works include collabs with the likes of The Neptunes and Migos.

Leia, whose real name is Johanna Edelburg, has two children, and is best known for her appearance alongside Bailey in the series Bringing Up Ballers.