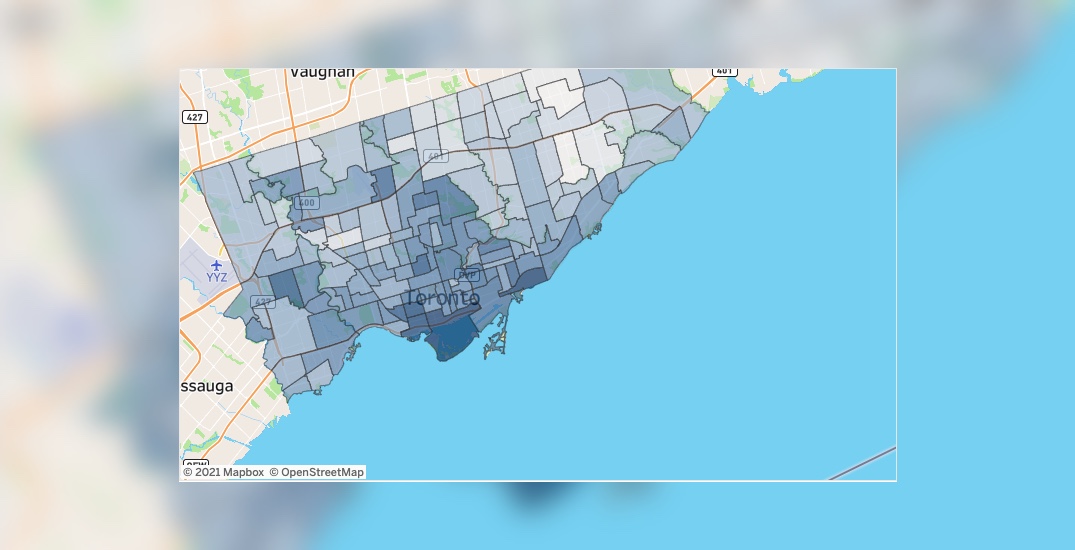 With COVID-19 cases rising in the province, Toronto’s infection rates have been increasing alongside them.

On Tuesday, Toronto reported 901 new COVID-19 cases, so we took a look at different neighbourhoods to see where the virus is spreading.

Toronto Public Health has an interactive neighbourhood map that displays infection rates throughout the city. The data has been available since May 2020 in an effort to show how infection rates are unequally distributed.

Low-income neighbourhoods and those with higher proportions of essential workers have been hit the hardest throughout the pandemic. But some neighbourhoods initially labelled COVID-19 hotspots have seen infection rates improve thanks to community outreach and high vaccine uptake.

These are the Toronto neighbourhoods with the highest rates of COVID-19 per 100,000 from November 30 to December 20:

Just two weeks ago, the highest rate of COVID-19 infections in a city neighbourhood was 219 cases per 100,000. It nearly tripled in 14 days.

These are the Toronto neighbourhoods with the lowest rates of COVID-19 per 100,000 from November 30 to December 20:

“Some neighbourhoods have higher COVID-19 rates because the people who live in them face higher risk due to their living and working conditions, including being essential workers who cannot work from home, lack of paid sick days, job insecurity, crowded housing, and taking crowded public transportation,” the City of Toronto says on the interactive map.

Beginning on Sunday, Ontario reintroduced capacity limits and limits on social gatherings in an effort to slow the spread of COVID-19. Recent modelling showed that Ontario could hit more than 10,000 cases per day if public health measures weren’t used to curb the spread of the Omicron variant.

The province’s booster dose rollout has also been accelerated, but many are still struggling to find appointments.

According to Toronto Public Health, 89% of Torontonians aged 12 and older have had at least one dose of COVID-19 vaccine.