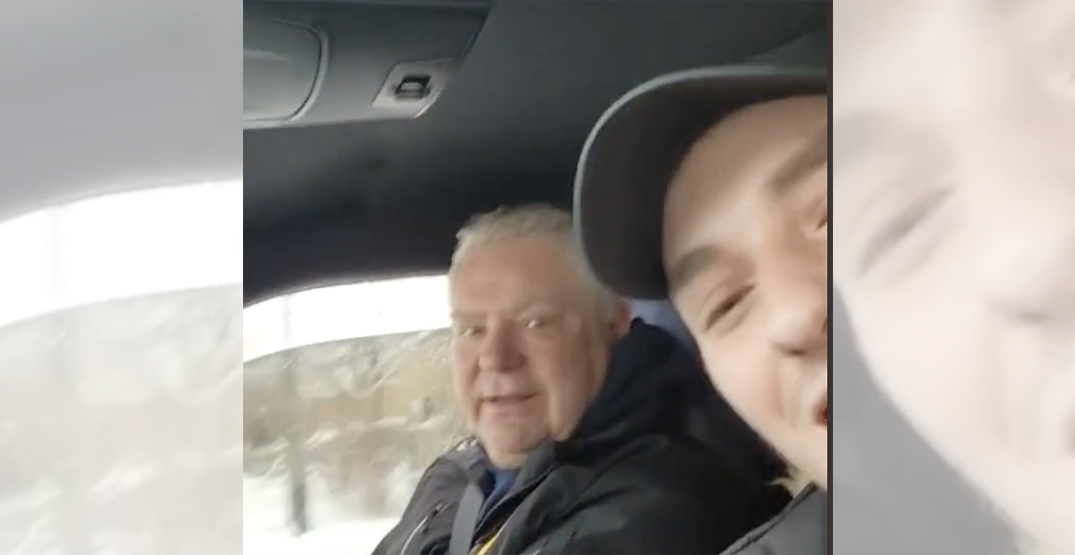 Something you probably didn’t expect to come out of the Ontario snow storm — Premier Doug Ford is going around rescuing drivers stranded in the snow.

A TikTok from Eddy Kandic shows Ford driving him out of the snow-covered roads.

“I’m the taxi driver today, the snow plow, everything else,” the premier says in the video.

In the caption of the video, Kandic says that Ford helped him “get home safe this morning.”

The video has made its rounds on social media since being posted earlier this morning.

Another video of the premier doing an interview with CP24 on FaceTime while driving is also making its rounds.

Ontario Premier Doug Ford was interviewed WHILE DRIVING on @CP24

Once CP24 realized the Premier was actively breaking the law, they cut his video feed.#ONStorm #onpoli @StevenDelDuca
h/t @righteousbean for the video pic.twitter.com/1vc710gOkr

People are taking to social media to express their disappointment at Ford’s actions:

One Twitter user commended Ford for helping, but said he could do better at Queen’s Park.

I mean, I’ll give the man props for helping, even if it is for publicity, but he could be helping people by the millions by doing a better job in Queen’s Park.

Another user wants the premier to prioritize figuring out schooling for unvaccinated kids.

He wants me to send my unvaccinated kid to school tomorrow. Maybe he can figure that out instead of pretending to be Mr. Plow.

Some tweets condemned Ford for FaceTiming while driving.

@fordnation is this leading by example? https://t.co/8JKDlcL1FN

This is our Premier… driving while on video talking to the news during a snow storm when all police have said to stay home. #dougford #onpoli https://t.co/CnOjxjQ4py

Unmasked @fordnation doesn’t care about #Ontario@OPP should arrest the driver for distracted driving and #Dougford for being unmasked. https://t.co/EdzeXsLhhU

Others aren’t sure if they’d welcome Ford rescuing them.

If Doug ford came to me when I was stuck in a ditch I’d think it’s the angel of death taking me to hell https://t.co/MULp3ieq2i