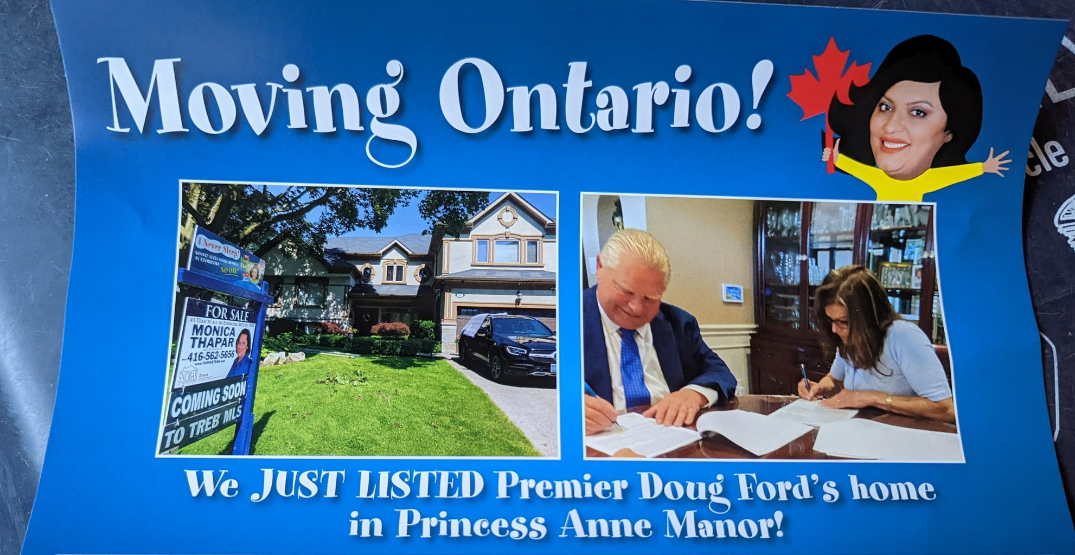 The realtor tasked with selling Doug Ford’s Etobicoke home is being forced to change her marketing tactics after using the premier’s name and photo without permission.

The flyer includes a photo of the Ford home and a picture of the premier and his wife, Karla, signing documents at a dining table.

However, a spokesperson for Ford told Daily Hive that the premier “did not authorize the ad and has instructed the real estate agent to remove it immediately.”

The home has not yet been listed on MLS, although a sign on the property reads that it is “coming soon.”

@FunkyTboney I know you just bought a house in Etobicoke, but maybe you’d prefer Doug Ford’s newly listed house? It doesn’t actually appear to be listed… But at very least, you will now receive a high volume of these flyers as an Etobicoke resident. Welcome! pic.twitter.com/PQcTgqhD8E

Photos of the flyer have been circulating on social media, with many Ontario residents taking aim at both its design and Ford himself.

One Redditor wrote, “There could be cocain [sic] and cash hidden in the walls.” While another said the font was reminiscent of that used for a “10-year-old’s birthday invitation.” A third lamented over the “terrible photoshop.”

The Ford family home has frequently been targeted by anti-mask and anti-vaccine protestors over the last two years.