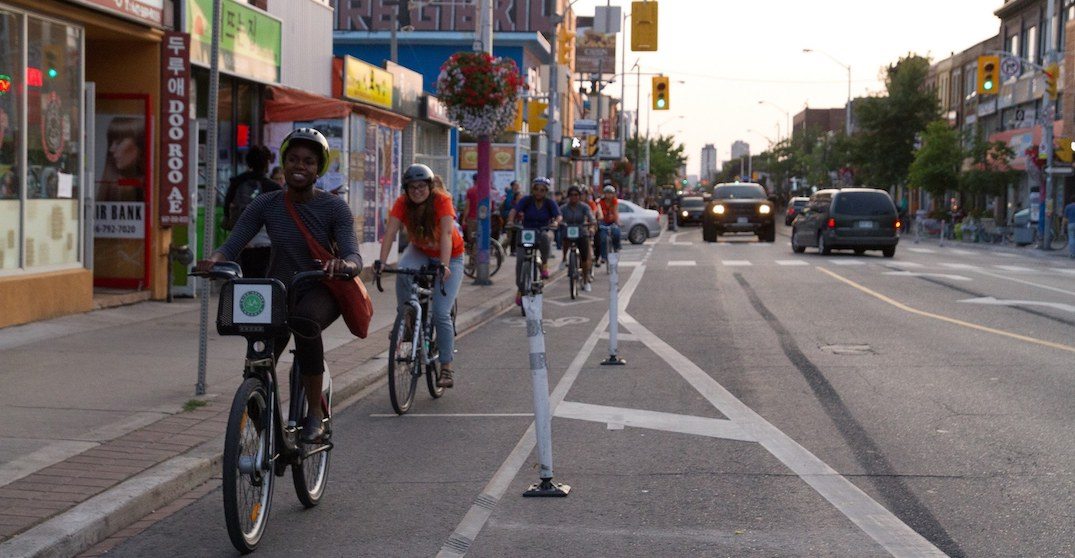 Ten years has made a huge difference when it comes to cycling in Toronto.

Cycle Toronto has looked at the recent Statistics Canada numbers in terms of commuting by bike, and the two-wheel transport has definitely gained traction over the years.

According to Cycle Toronto, cycling has increased between 15 to 25% in different neighbourhoods, with some areas as high as 33% in areas like the Annex, and Trinity-Bellwoods.

“These are areas where we have observed high numbers of cyclists riding throughout the year during morning and evening rush hour, but having the census data to back up this anecdotal evidence is powerful,” says Cycle Toronto. 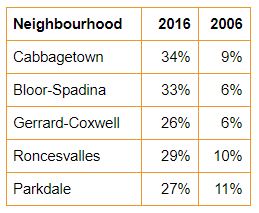 Trailing Cabbagetown and the Annex is Gerrard-Coxwell which saw 26% more cyclists commuting to work, followed by Roncesvalles at 29% and Parkdale at 27%.

Maps of the area using census data has also shown a major increase in the city overall. 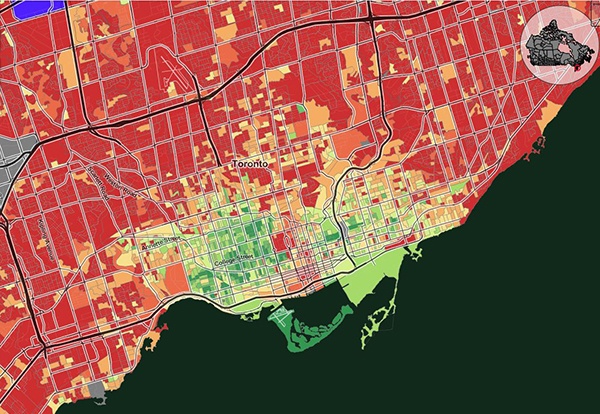 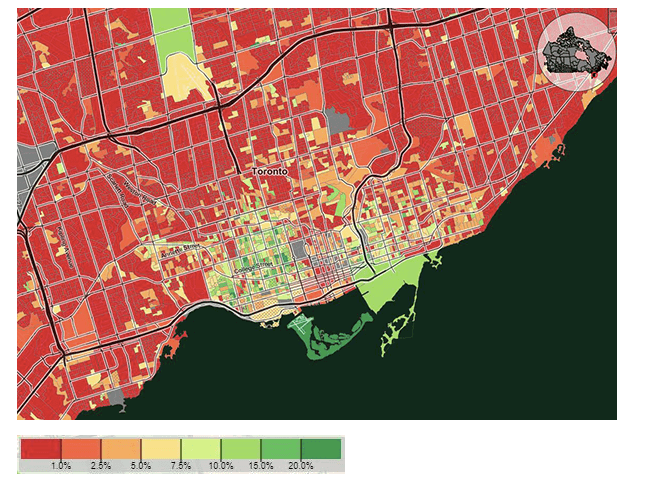 Cycling data 2006, compared to 2016 above/ Legend is the % of the population that list cycling as their main mode of transportation to work (Census Mapper via Cycle Toronto)

Looking outside the city, some neighbourhoods surrounding the downtown core have also seen an increase in cycling.

The highest growth outside downtown is New Toronto, or Islington Avenue and Lakeshore Blvd West, which saw an 11% boost in cycling. That neighbourhood is followed by Silverthorn, York University, and Agincourt.

Cycle Toronto attributes this to neighbourhoods that have an emerging cycling culture. For example, they say, “Agincourt has a new 12km trail system (the North Scarborough Green Loop) connecting schools, parks, malls, and other destinations, which suggests there is a relationship between cycling mode share and presence of cycling facilities.” 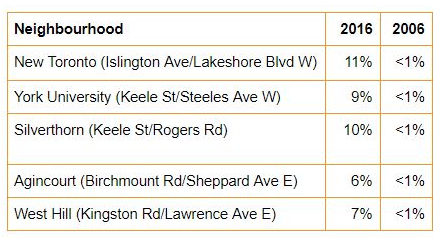 Toronto is increasing its cycling infrastructure, slowly but surely. This year, the City went ahead with keeping the Bloor Street bike lanes as permanent structures.

Additionally, Toronto’s 10-year Cycling Network Plan includes a proposed minimum grid network of protected bike lanes on main streets, low speed bikeways on quiet streets, and multi-use trails. The plan just got a $25.6 million investment from the province, which is also going to expand the Bike Share Toronto system with up to 300 new Bike Share locations, 3,000 bikes, and 6,000 docks.

If all goes to plan, that number of cyclists riding to work is sure to increase over the coming years. Especially considering Toronto’s commute is currently the longest in Canada, mostly due the use of public transit.