Toronto’s commute time to work is getting worse.

Although it may come as no surprise to those who commute into (through, across, and out of) the city, the average time getting to work has gone up over the past five years.

In comparison with other major cities, Toronto is a head of Montreal by 4 minutes, and Vancouver’s commute comes in the shortest among the three, at 29.7 minutes.

Statistics Canada attributes the rising times in commuting to the use of public transit, which has been on the rise over the past five years.

“Nationally, most of the increase in overall commuting time was attributable to a longer average commute for those whose main mode of commuting was public transit, which rose 1.9 minutes to 44.8 minutes in 2016,” states Stats Canada.

In terms of transit, while we like to complain about the TTC, Toronto had the highest proportion of workers using public transit in 2016 at 24.3 %, followed by Montréal and Vancouver. Toronto’s transit users is up from 1996, when it was at 22%. 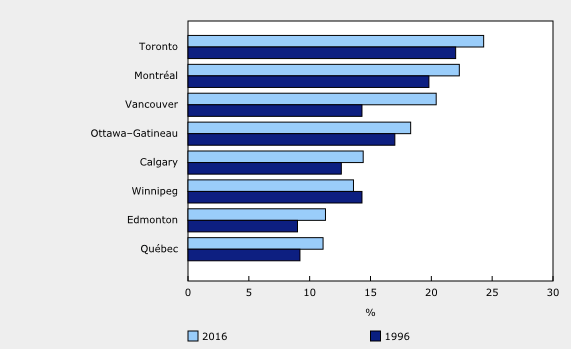 Another reason for the longer commute in Toronto, is that the GTA includes 24 different municipalities, and where people work has shifted over the past several years.

In 2016, over 190,000 Canadians were commuting to or within the City of Toronto, which was a 16.6% increase compared to figures in 1996, with a greater number of commuters working in cities around Toronto.

The good news is, Toronto commuters are most likely to use sustainable transportation, with 42.5% of commuters using transit or cycling to work in 2016.

But, the TTC is actually moving at reduced speed on Line 1 for a while… so there’s that too.