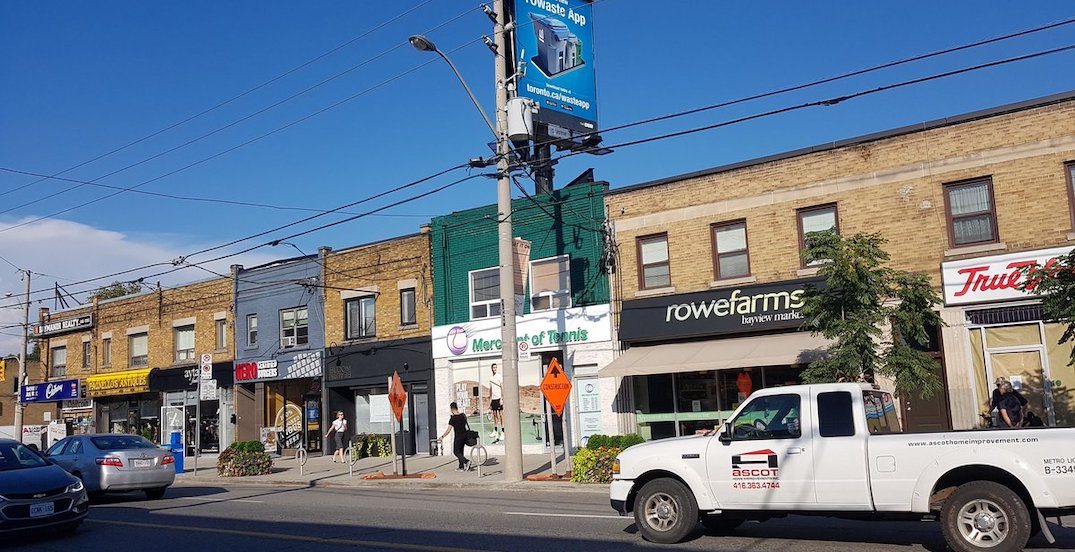 “We’ve been here for 81 years and we’d like to make it to 100,” says Domenic Badali, owner of Badali’s Fruit Market, which occupies prime real estate in the heart of the Bayview Avenue strip in Toronto’s leafy Leaside neighbourhood.

Other businesses on the strip – which extends from about Davisville Avenue to just south of Eglinton Avenue – haven’t been as fortunate. “We’ve seen a lot of change,” says Badali. “Stores have come and gone.”

Currently, over half a dozen storefronts sit glaringly vacant, presumably thanks to sky-high property taxes and rent costs along the strip.

These include some former locations of longtime neighbourhood staples like True Value Hardware, which will apparently become home to a Mediterranean restaurant.

Naturally, longtime Leaside residents are sad to see staple mom and pop spots disappear, especially because they are part of what contributed to Bayview’s historic “small town” charm, where shopkeepers have always known loyal customers by name. Central to the family-filled and tree-lined neighbourhood, the Bayview retail channel is surrounded by residential streets that are filled with crossing guards who happily greet each child on the way to school and a tight-knit community of neighbours. For those who grew up in the neighbourhood, it’s always felt like its own isolated “bubble” within the big city, where a trip to Bayview inevitably meant friendly run-ins with other red wagon-clad, ice cream cone and gelato-clutching families, many familiar with one another through the local Leaside sports leagues or school fundraising initiatives.

Thanks to its location off the subway line (and the Bayview 11 bus to Davisville station always seemed like the most unreliable in the city – sorry, TTC), Leaside’s predominantly relatively well-to-do residents have remained separated from the city that exists just a short drive down the Bayview Extension away, in their own little world, where things like poverty, frenetic urban chaos and crime were low compared to many other Toronto neighbourhoods (note: I’m not saying these things didn’t or don’t exist; they have and do).

The new Eglinton Crosstown LRT is going to change this exclusive, small-town feel that Leaside’s residents and business have become accustomed to in a major way – and it’s already doing so.

Currently slated for completion in 2021, the new subway line will add 25 subway stations running east-west along Eglinton, including one at Bayview and Eglinton (“Leaside” Station), and further east at Laird and Eglinton (“Laird” station).

In a few short years, the relatively isolated neighbourhood will become highly accessible and is expected to experience a massive population growth. In the meantime, it’s riddled with a mess of construction – something that is not only increasing traffic on residential streets, but also negatively affecting foot traffic on the northern part of the Bayview strip, as a handful of business owners tells me. “It’s directly affecting our businesses,” one says. “People can barely cross the street. It’s getting more difficult to see what sort of timeline is going to take place; we don’t know what to expect.”

While the completed LRT and its by-products (i.e. a natural influx of new condo buildings and residents surrounding the subway line) will inevitably help Bayview’s foot traffic cause, it will also jack up costs of running businesses, leaving the little guy struggling to stay afloat.

“The arrival of the LRT will increase commercial real estate values from both a lease and sale perspective in the Leaside area,” says Graham Smith, Vice President, Retail Services, Cushman & Wakefield ULC. “With developers already planning and developing mixed-use projects with street front retail, new construction retail product will command a rental premium when compared with older and outdated retail storefronts. This will result in overall upward pressure on retail leasing rates as landlords look to capitalize on changing market dynamics.”

For the building owners, the property taxes keep increasing. “The taxes are really impacting us,” says an employee at Pagnello’s Antiques, a neighbourhood staple for more than 50 years. Here, the hope is that the antique-loving millennial set (as opposed to the “IKEA-shopping Generation X”) that continues to move in will be good for business. Sadly, one can only predict that places like Tony’s barbershop – a decades-old spot that’s complete with an aging sign and a charming barber’s pole – could struggle to survive despite its loyal clientele.

“Rising costs will certainly put pressure on smaller local tenants to stay in business,” says Smith. “These local businesses will need to ensure their offerings and storefronts stay relevant in a changing market and the retailers that can execute this will benefit from the increased traffic in the area. The unfortunate reality is that a handful of local tenants will be priced out of the market and will be forced to close or relocate to less expensive markets.”  Already, the newer businesses in the area – like the ever-popular F45 Training gym and Blo Blow Dry Lounge – cater specifically to the young professional demographic with dollars to drop.

“They’re trying to brand Leaside as the Upper East Side; we’re not that,” says one business owner, who fears that trying to emulate Manhattan’s upscale neighbourhood is going to further diminish Leaside’s heritage and designation as a “garden city” – a method of urban planning whereby self-contained communities are surrounded by greenbelts. She is trying to promote sustainability and becoming a green district to Bayview businesses. The owner’s Upper East Side reference pertains to the upcoming condo and townhouse community by developer Camfrost Felcorp that is set to occupy over four acres at 939 Eglinton Avenue East. Named Upper East Village, the future development comes complete with a marketing campaign that included a newsletter outlining the neighbourhood hot spots and even recipes for Upper East Side-inspired cocktails.

Meanwhile, on the Bayview Strip between Hillsdale and Soudan Avenues – and just a couple of blocks south of the future Leaside station – another new condo development has broken ground. A development by the Brown Group, the site will house a seven-storey commercial, rental and condominium-mix building, complete with ground-level storefronts. On the positive, these new developments will offer entry into the community for families that can’t afford the $2 to $2.5-million price tag that comes with most of the homes in the neighbourhood, especially on the east side of Bayview. Though disrupting the homogeneity of Leaside, this will offer the vibrancy and character that comes with a varied demographic. The smaller spaces also present another way of keeping the aging population of longtime residents in the neighbourhood by providing them local options to downsize.

Many local residents I spoke with, however, have expressed concerns about the impact of such developments on traffic and congestion on the residential streets, doubting that the arrival of the subway will result in fewer cars on neighbourhood roads. Most already angrily blame the surge in traffic on the LRT construction. More than one resident I spoke with referenced the tragic death of six-year-old Georgia Walsh, who was hit by a car in July 2014, years before the LRT construction really ramped up. In the wake of the tragedy, local residents pointed fingers at the growing traffic and congestion issues that were already beginning to plague the neighbourhood. With so many children in Leaside, it’s a serious cause for concern.

“Basically, what we are seeing and the chats we have had are that the original North Leaside residents are leaving before the LRT is completed because they enjoyed the exclusivity of the neighbourhood, which will soon be gone,” says realtor Lowrey Cain, part of Cain Brothers with Sage Real Estate.

“It will be accessible to everyone. The old are moving out while the new are moving in.” Cain – who grew up just south of Leaside in Bennington Heights – doesn’t think that the housing prices will necessarily increase any quicker than normal with the arrival of the LRT. “We are running out of room in our lovely city, especially in good areas with access to good schools, so I think the demand will remain constant,” says Cain. “But there has been a statement made by schools along the LRT that just because you own a condo in the district of a school, it doesn’t guarantee your child will get a spot.”

Then there’s the sometimes-overlooked plight of the current renters in the neighbourhood, who live above Bayview’s storefronts and in the older apartment buildings on Bayview.

“While condos expand access to housing, they don’t provide anything that approaches affordable housing,” says one Leaside renter. “Yes, there will be condo owners who rent out their units, but the rates will be high and ongoing occupancy uncertain. Rather than increasing purpose-built housing, I’m seeing rentals torn down to make room for condos, I assume. The fourplex I live in is still a rental, but the owners have already updated two units and have plans to renovate the entire building. These renovated spaces are beyond my means.” Of course, this is a byproduct of gentrification, and something no Toronto neighbourhood is immune to.

Some residents, however, remain positive about the arrival of the LRT. “TTC service in the area needs improvement, for sure, so the LRT is a good thing, especially for teenagers not old enough to drive,” says one Leaside resident. “The commercial stretch of Bayview will be transformed to cash in, and shuttered storefronts will be a thing of the past. I’m looking forward to way better shopping and improved services close to home.”

As Trae Zammit, chair of the Leaside-Bayview Business Improvement Association (BIA) and owner of longtime Bayview business The Smokin’ Cigar states, there are fewer vacant stores on the strip than there were five years ago.

“The LRT is great; it’s short-term pain for long-term gain,” he says. “The arrival of more families means more shoppers.” Many of the local businesses, he points out, donate back into the community – something that’s only possible if shoppers continue to populate them. The BIA is working to rebrand the neighbourhood in preparation for the changes, complete with a voted-on new name, Bayview-Leaside – something now reflected in the street signs – to account for the fact that the west side of Bayview was historically Leaside (or East York), while the other was Toronto.

Now, it’s easier to make the two sides uniform when it comes to the use of public space. Zammit says the BIA’s vision for Bayview-Leaside includes an effort to make the Bayview strip more of a destination spot with things like public bikes, illuminated trees, green spaces, public seating areas and more festivals.

“We don’t want to lose that community feel,” he says. Badali’s, Zammit points out, supplies the fresh fruit and vegetables to many of the neighbouring restaurants. While I discovered that not every resident or business owner is a huge fan of the BIA (oh, the drama), he makes a valid point: the LRT is coming whether you like it or not and adaption is essential to the community’s success.

Naturally, changing neighbourhoods are inevitable in a city like Toronto; Leaside’s story isn’t a new one. The shopkeepers won’t know all residents by name the way they once did. Wagons and strollers won’t so easily glide down Bayview thanks to more pedestrian traffic. Street hockey could become a thing of the past as traffic increases on residential roads. And the neighbourhood’s Pleasantville bubble will definitely burst, if it hasn’t already.

Such is (big city) life.