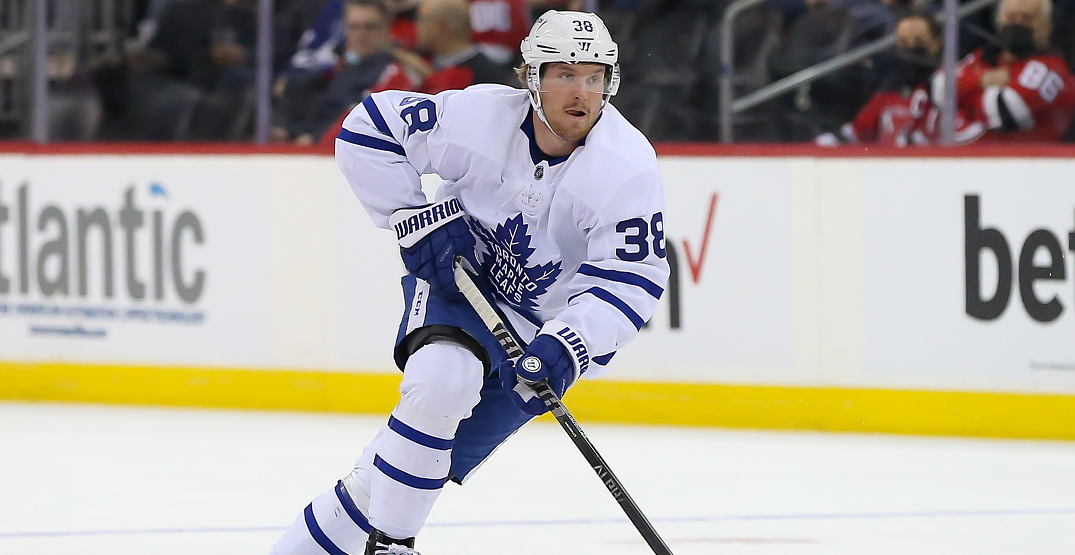 With NHL free agency just around the corner, Toronto Maple Leafs defenceman Rasmus Sandin remains without a contract for next season.

Sandin isn’t a star defenceman with the Leafs, but it’s hard to say that trajectory isn’t possible for the 2019 first-round pick, or at least a regular top-four role.

In 51 games this past season, Sandin put up five goals and 11 assists while averaging 16:58 per night. Dealing with a knee injury that forced him out of the final 20 regular season games of the season, Sandin didn’t crack the lineup in any of the Leafs’ seven playoff games in their first round series loss to the Tampa Bay Lightning.

With four Leafs’ defencemen from last season all north of 30 years old: Mark Giordano (38), Jake Muzzin (33), TJ Brodie (32), and Justin Holl (30), the path looks likely for Sandin to eventually take over a much larger role on the Leafs’ d-corps.  Sandin also got the second-most power play time of any Leafs’ d-man last season, behind only Morgan Rielly.

But coming off his entry-level deal, the negotiations reportedly haven’t been easy between the Leafs and the 22-year-old Swede.

“All I’ve heard is, this is a trickier situation than the Maple Leafs hoped, or wanted,” Sportsnet’s Elliotte Friedman stated in his 32 Thoughts column from earlier today.

Per Capfriendly, the Leafs have $6.4 million in cap room for next season, with five roster spots left to fill.

They don’t have their starting goalie — Jack Campbell remains unsigned, and unrestricted — while it seems unlikely they’d be willing to run out an Erik Kallgren-Petr Mrazek pairing come October.

Sandin is far down in the Leafs’ depth charts, but he still projects as an important piece of their future. But what if the young defenceman wants a bigger role, right now? Is a trade of his rights on the horizon? Or is the “tricky” part of the negotiation all about finding the right deal that keeps him in Toronto?

Assuming Sandin doesn’t sign by July 12, there’s of course, the unlikely-but-still-possible offer sheet. In this case, another team would have the chance to offer Sandin a contract, and should he sign it, Toronto would have a week to match the deal or be given a draft pick or two in return.

Per the NHL, here are this upcoming season’s salary ranges, and what the signing team would have to return back to Toronto:

As each day passes, the possibility of an offer sheet only grows and grows. It only takes one GM (plus Sandin to sign it) for an offer sheet to go through. And for up to $4.2 million, a team could have Sandin for as low as a second round pick. The more you think about it, the more it’d make sense for someone other than Toronto to try to force the Leafs’ and Sandin’s hand.

For many NHL players, the contract succession chain is pretty simple: a three-or-four entry level deal, a one-or-two year bridge deal while you prove yourself a bit more in your early 20s, and then a long-term deal after that.

Evolving-Hockey.com projects Sandin’s next contract to be similar to Liljegren’s: a two-year deal at $1.6 million per season.

But a bit of critical thinking means that it’s likely not something in that ballpark, otherwise both parties would’ve come to an agreement by now.

If the negotiations were going swimmingly, announcing Liljegren and Sandin’s contracts around the same time would’ve made everyone’s jobs a little bit easier. And by way of the aforementioned offer sheet compensation, well, he could pretty easily take a better deal somewhere else.

Sandin’s played just 88 games on his entry level deal, so it’s hard to fully see the Leafs committing to a long-term contract just yet. But if they do project him as highly as they’ve spoken in the past, maybe it’s time to bump up his timeline, pay him handsomely on this contract, and move out one of their veteran defenders (or even a forward) to increase his role and compensation on the team.

As Friedman said, it’s a trickier situation than the Leafs wanted. And with just nine days out until he’s available to chat with other teams: well, tick, tock.