Is there anything better than watching the ballgame with a cold beer in your hand, some great company and an open roof? Regardless of how poorly the Blue Jays are playing on the field right now, a relaxing ball game at the Rogers Centre is one of Toronto’s favourite summer pastimes.

It turns out that doesn’t just apply to fans, but players as well. Former Blue Jays reliever Jason Grilli was on hand at the Rogers Centre for last night’s Blue Jays-Orioles game.

He kicked back and hung out close to his old stomping grounds: the Blue Jays’ bullpen in left field.

Bullpen views. Miss them days but now get to enjoy them differently. #itwasagreatride #bluejays

There he was … just hanging out in the stands, watching the ball game with his old man and enjoying a beer (he’s a Michelob Ultra fan, by the looks of it). The man sitting to his left is Steve Grilli, Jason’s father and former Blue Jay. Grilli Sr. had a very brief stint in Toronto during the club’s 1979 season.

The father and son duo appeared on the Blue Jays broadcast doing what regular fans often do at the Rogers Centre; talking baseball and enjoying a cold beverage. 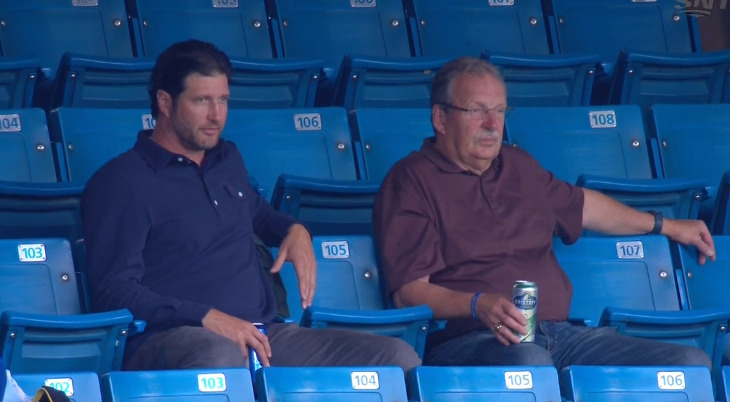 After he posted his whereabouts to Instagram, a few adoring fans even got the chance to meet the former Blue Jays setup man.

You never know who's going to show up at the ballpark.

Given the way the Blue Jays’ bullpen has pitched as of late (they had the second-worst ERA in the American League in May), there were probably some who suggested Grilli come out of retirement.

For now, the 15-year veteran has stepped away from baseball and told Toronto’s TSN 1050 that he’s enjoying life at home, catching up with his family and getting back to being an “All-Star Dad.”