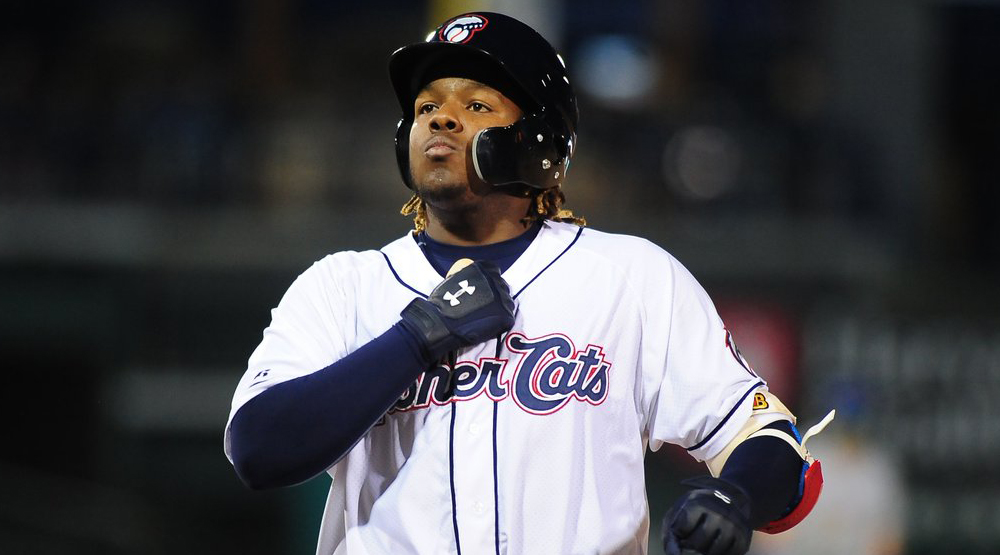 Back on March 27th in Montreal, Vladimir Guerrero Jr. provided a glimpse into what the future might look like for the Toronto Blue Jays.

His dramatic walk-off home run in front of the home crowd – with his teammate Bo Bichette hopping like a kangaroo in the background – painted a vivid picture of the possibilities for the Blue Jays two-to-three years down the road.

In March, the timeline for Vlad’s arrival seemed down the line. Next year at the earliest, but more realistically, he was expected to make his Major League debut in 2020. But since his arrival in Double-A with the New Hampshire Fisher Cats, Guerrero started tearing the cover off the ball and he hasn’t stopped since.

Guerrero’s numbers in New Hampshire are eye-popping. In 48 games, the Montreal-born prospect has a .417 batting average and an on-base percentage of .465, with 11 home runs and 53 RBIs.

Not just Blue Jays fans are keeping a close eye on the 19-year-old phenom, the entire baseball world has taken notice. Ever since Ronald Acuna Jr.’s promotion to the Atlanta Braves, Vlad is the consensus No. 1 prospect remaining in baseball right now. Acuna hit his way to a spot on a big league roster.

It won’t be long before Guerrero does the very same.

His play warrants a promotion

If promotions were earned on merit alone, Vlad might’ve been called up by the Blue Jays already.

Vlad Guerrero Jr. absolutely crushed this ball for his 9th home run of the season. Might be time to call him up… pic.twitter.com/TzlyrblxbF

His impressive numbers in Double-A alone warrant a promotion to Triple-A, if not to the big leagues. However, there are several factors at play preventing the Blue Jays from promoting Guerrero.

Things like service time: the amount of control a team has over a player before they’re eligible for free agency. Then there’s Super 2 status, which means if he’s promoted early enough, could cost the Blue Jays tens of millions of dollars down the road.

Those are all business aspects which may hold Vlad back, but the truth is, given the Blue Jays’ position in the standings, calling up a prospect like Guerrero probably won’t save their season anyway.

Reason to keep him away from Toronto

The Blue Jays are officially past the one-third mark of the 2018 season and own a 25-31 record. One year ago, that wasn’t such a big deal because the American League Wild Card race was pedestrian from start to finish. Hovering around .500 gave any team a fighting chance.

Last year, the Jays finished May with a 26-27 record and sat two games out of a playoff spot. In 2018, the Blue Jays’ record of 25-31 puts them nine games out of a Wild Card spot and there are three teams ahead of them in that chase already.

Were the Blue Jays one player away from jumping back into contention, I think they would give Guerrero a legitimate shot. But right now, they aren’t a Vlad away from leapfrogging the Oakland A’s, Tampa Bay Rays and LA Angels in the standings and knocking off the Seattle Mariners for that second Wild Card spot.

There are systematic failures within the Blue Jays’ roster. The starting pitching has been abysmal, the bullpen has come back down to earth, Josh Donaldson can’t rediscover his MVP-self, Roberto Osuna probably isn’t coming back any time soon, and there are no indications the Jays are on the cusp of turning this thing around.

With a team struggling this badly as of late, is that the kind of environment the Blue Jays want to put their most important prospect in? Considering the state of the team at the MLB level, it’s no wonder the Blue Jays’ front office isn’t itching to make the call to pluck Guerrero from Double-A.

He needs a challenge

One wonders how much longer Vlad will continue to play at Double-A before being promoted to Triple-A. He’s leading almost every offensive category and doesn’t seem challenged at that level. Destroying Double-A pitchers must be a boost for his confidence, but if he’s shown he’s capable of facing tougher talent, doesn’t it make sense to bump him up one level to Triple-A with the Buffalo Bisons?

I get that the Blue Jays are meticulous and careful about rushing their most prized possession, but how is Vlad developing if he isn’t challenged at Double-A? Graduating to the next level is the logical choice, even if he’s posting video game-like numbers with the Fisher Cats.

It’s not a question of if Guerrero will make his debut with the Blue Jays, it’s when. At the start of the season, it looked like his timeline was still a year or two off. Then, after his bat caught fire in the minors (and Kendrys Morales’ bat coincidentally went ice-cold), it felt like Vlad’s arrival was imminent. That’s not the case anymore.

The advantages of keeping him status quo negate any incentive to promote him to the Blue Jays. Yes, Vlad’s presence in this Blue Jays lineup would be a great benefit, but unless he moonlights as a closer or an ace, the Jays have far greater problems on their roster to fix.

If the first two months of the season are any indication, the fan outcries for Guerrero will only get louder as the season carries on. However, there’s almost no incentive for the Blue Jays’ front office to promote their marquee player at this very moment.

If the scouting reports on Guerrero are even remotely accurate, he’ll be a star with the Blue Jays for years to come. But year one of the Vlad era may have to wait until 2019.

Vlad Guerrero Jr. is soon to take the MLB by storm 🔥💪 pic.twitter.com/UPZkjrutUo