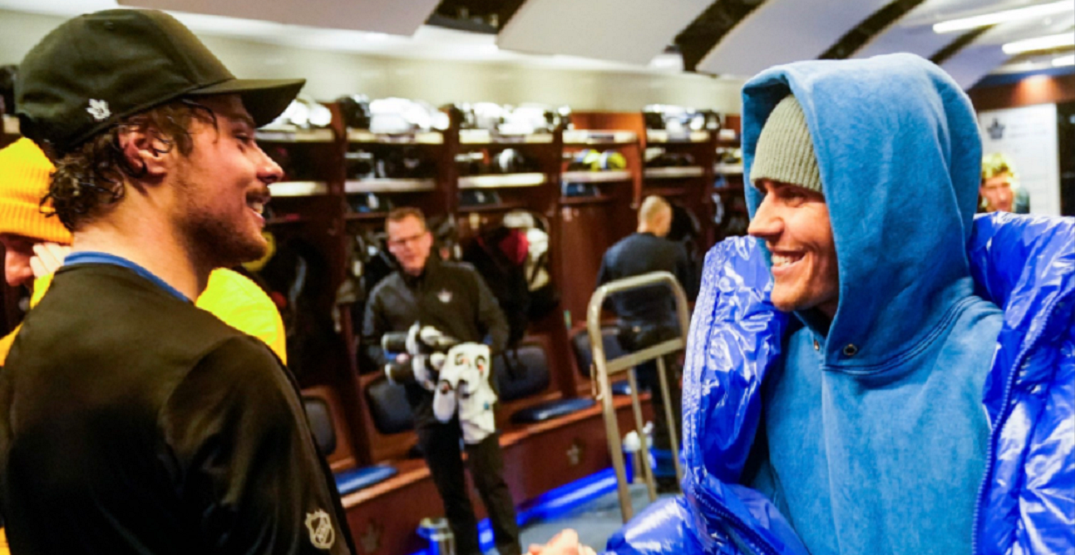 Justin Bieber just might be the good luck charm the Toronto Maple Leafs were hoping for.

On Wednesday night in Toronto, Bieber pulled up to Scotiabank Arena to support his favourite team, which has become a frequent occurrence over his decade-plus run of fame.

But this wasn’t just any game, with the Leafs sporting the drew house reversible jerseys co-designed by Bieber and his team himself.

The teams were deadlocked at two goals apiece after 40 minutes, but a late third-period goal by Pierre Engvall gave Toronto the 3-2 victory over the New Jersey Devils.

Following the game, Bieber pulled up to the Leafs’ locker room to go visit Auston Matthews and the rest of the Leafs. Matthews even snuck up on Bieber with a surprise hug for his pal.

Matthews has a longtime standing friendship with Justin Bieber, as he’s come out to support the Leafs on many occasions. The two have attended multiple UFC events together, while Bieber joined the Leafs for an informal skate back in December 2019.

Bieber also posed for a couple of pics with Leafs alumni Darryl Sittler and Doug Gilmour.

Got some family in attendance 💙💛 pic.twitter.com/ilY4Pz6uuy

Bieber is set to play Scotiabank Arena on Friday night, his first full concert in Toronto since the 2016 Purpose Tour.