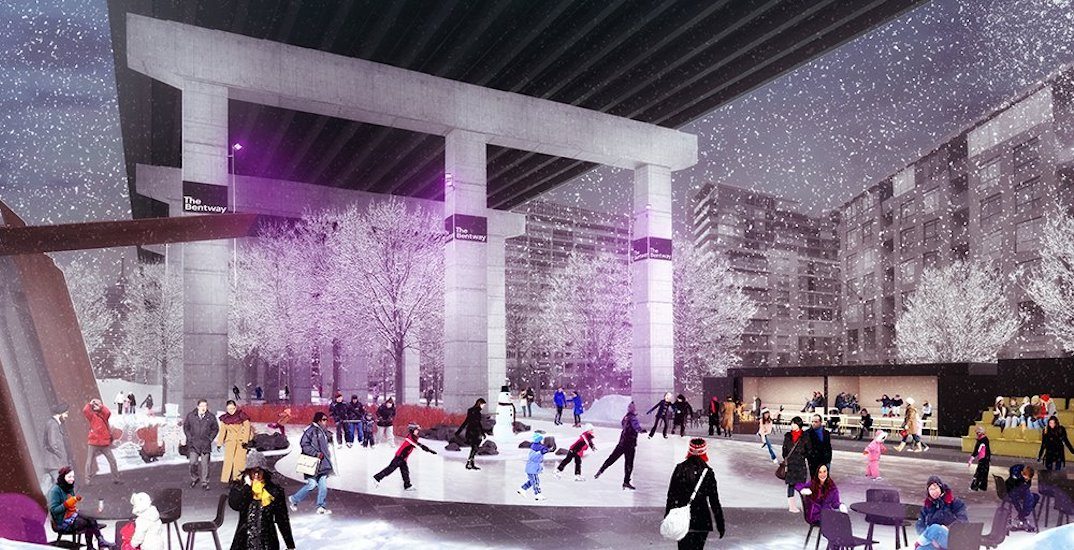 It’s almost time! The Bentway Skate Trail’s first section is opening to the public on January 6.

Opening weekend festivities include live musical performances, demonstrations of Ice Breaking, which is a unique hybrid of break dancing and freestyle ice skating by the Toronto Ice Skate Group, art installations, food and drink, music throughout the day from the best of Toronto’s DJ scene, pop-up curling, and FREE admission to Fort York National Historic Site.

Then, starting on Friday, January 12 and running until mid-March, BEATS AND BENTS Friday Night Skate Parties will present two DJ sets per night. Featuring the city’s best DJs spinning tunes, the party starts at 8 pm and goes until 11 pm.

That’s right, you can lace up, skate outdoors while dancing to some awesome beats.

January 12: Kicking off the weekly nights with Straight Outta Toronto with UforChange alumni DJORK (Trevoy Wiliams) and didicious (Jenniffer Duverge) playing the most influential hip-hop and R&B music of all time.

January 26: The Bentway pays homage to the decade that gave the world Back to the Future, Ghostbusters, and The Breakfast Club, with Back to the 80s and UforChange alumni DJ Charlie (Raheem White) and DJ Money Jane (Michelle Lima) mixing and blending hip hop, R&B, funk, soul, electronic, and much more.

February 2: Last Planet presents a line-up of world renowned artists guaranteed to pack the Skate Trail and create the most memorable dance floor experience on ice.

February 9: Escape the deep freeze and teleport to the Caribbean for a mix of reggae, dancehall and soca sounds curated with tracks so hot by UforChange alumni DJ Money Jane and DJORK the sun will have no choice but to shine, Welcome to Jamrock.

February 23: Get Jiggy Wit It promises a night of throwbacks from the 90s and early 2000s with sounds from UforChange alumni DJ Charlie and didicious.