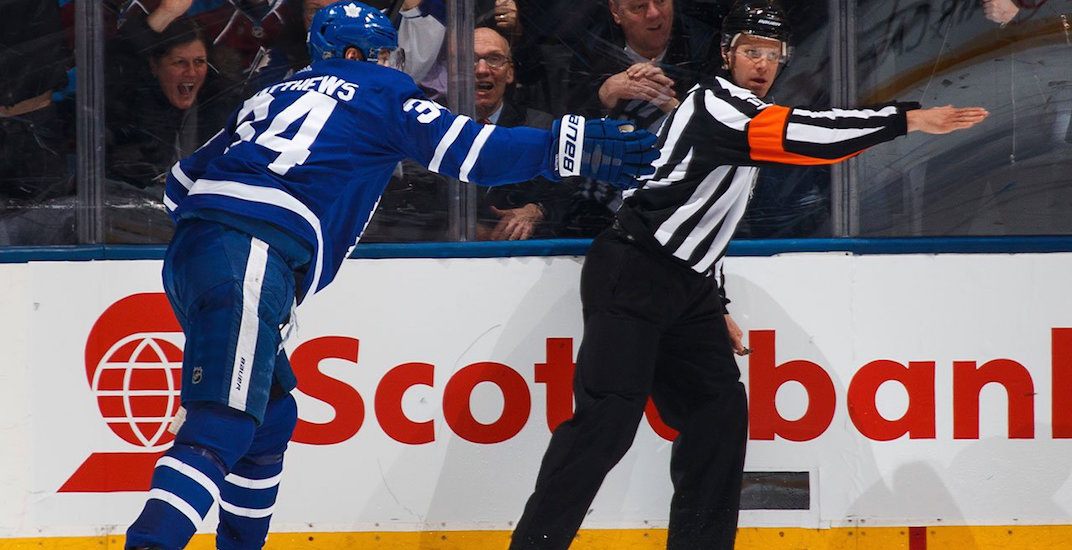 Auston Matthews had a goal celebration for the ages on Monday night.

During a matchup against the Colorado Avalanche, Matthews appeared to break a 1-1 tie midway through the second period. Corralling a bouncing puck in behind former Toronto goaltender Jonathan Bernier, the second-year forward looked to have scored his team-leading 21st goal of the season and second in as many games.

His excitement quickly turned to clear disappointment, however, as Colorado’s coaching staff successfully challenged and overturned the goal for goaltender interference. On the replay, Matthews’ stick made contact with Bernier’s blocker, although Bernier himself did not appear to be pushing for a review.

Lmao Auston Matthews' reaction to his goal being called back pic.twitter.com/NrdmyJgIsf

The ruling was a confusing one for Toronto fans and media, especially considering:

a) the contact appeared to be initiated by Bernier
b) Bernier looked to be out of position to make the save, and was not turned towards the puck when Matthews shot it

These goalie interference calls are honestly so perplexing. A league that wants to increase scoring calls goals like that back.

Bernier put his stick there and had no clue where the puck was. What was that?

On his next shift, however, Matthews made amends for the controversial call, and made sure everyone knew how he felt about it. Receiving a pass from linemate William Nylander, Matthews again gave the Leafs a 2-1 lead just 1:40 of gametime after the first goal was overturned.

After scoring, Matthews immediately turned and emphatically pointed towards the net- the traditional referee signal for a good goal.

“I just made sure the puck was in this time.” —Auston Matthews pic.twitter.com/CDlCoa5gih

Mike Babcock got texts from other NHL coaches who felt the Matthews goal shouldn’t have been overturned.

Asked if he knows what goalie interference is any more? “Nope.”

Unfortunately for Matthews and the Leafs, the celebration would be the high point of the night. After the Avalanche’s Nail Yakupov struck back to tie the game just over a minute later, the Leafs ultimately fell 4-2 in the contest, as Colorado picked up their NHL-best 10th straight victory.