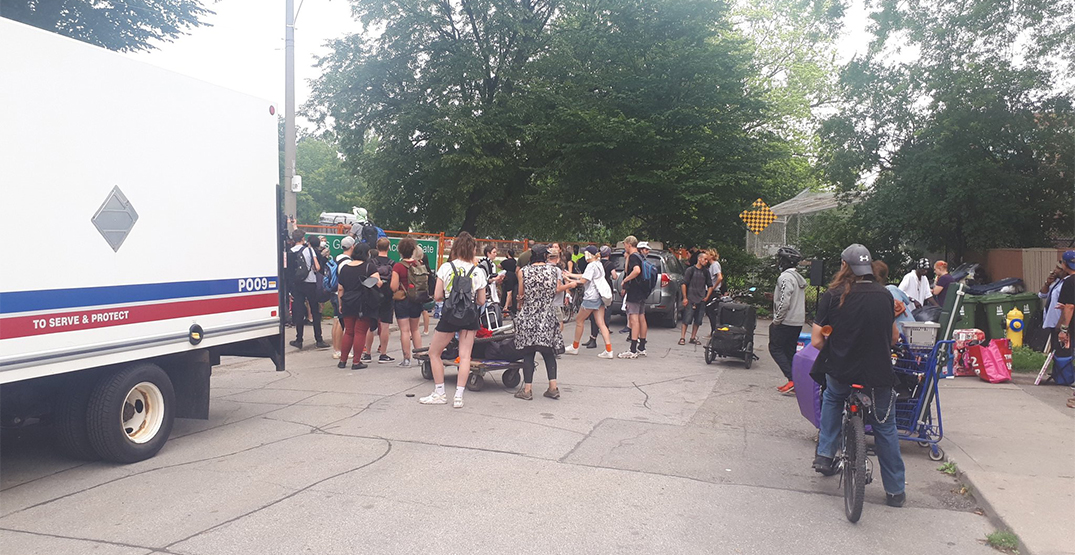 Dozens of police officers were on site as City staff enforced trespass notices that were issued on June 12 to the approximately 30 people living in the park at Dundas and Bathurst streets.

ENCAMPMENTS
6 more people have been arrested for Trespass to Property at Alexandra Park, for a total of 9. Officers continue to provide support to @cityoftoronto staff & enforce the law when called upon to do so. Anyone refusing to leave the park, can be arrested/charged ^mg

An orange fence was erected around the park while City staff tried to convince the homeless individuals to move to indoor accommodation. According to a City news release, the accommodation provides meals, showers, laundry, and mental health supports.

But homelessness advocate Diana Chan McNally, who was at Alexandra Park Tuesday, criticized the City for choosing a “paramilitary” approach instead of making more effort to help the people living in the park.

Why are dozens of cops necessary to support City staff? Or 8 horse-mounted officers? pic.twitter.com/hsDvAVQ9t3

“Volunteers being thrown out of the kettling cage. How will residents inside be supported to move? Will they be in there alone with police and security?” she said on Twitter.

My apologies, here comes the “help” for folks being displaced: a garbage truck. Again, no social workers in sight. pic.twitter.com/aUjeXNr5O3

The Shelter and Housing Justice Network also accused City workers and police of throwing campers’ belongings out onto the street without making efforts to help them pack up to move indoors.

There are no City housing or outreach workers here – where residents of the park are being ejected into the street on Ryerson. Piles of everything people own on sidewalks, carried and in carts as they move on to, likely, the next park. There is no permanent housing on offer. pic.twitter.com/RR6mUfA7K4

Some evicted residents and community advocates gathered at Queen and Ryerson streets afterwards to voice their frustrations about the process.

if you’re in the neighborhood of Queen Street West and Ryerson Avenue (beside shoppers drug mart), please come join us. evicted residents will be speaking, as well as @HPAP_Ontario, @SHJNetwork @Diana_C_McNally, and a performance by @cadenceweapon pic.twitter.com/K7FhaqU1lG

The City also forcibly removed homeless campers from Trinity Bellwoods Park earlier this year, where several protesters were arrested after clashing with police.